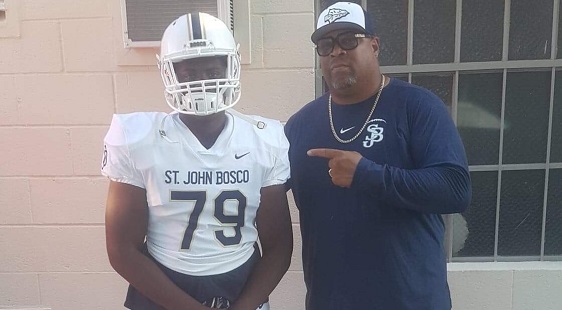 #AGTG After a Great conversation with @CoachSark I am Extremely Blessed and Honored to receive an Offer from The University of Alabama! #RollTide??⚪️ pic.twitter.com/XrDbX5fu6o

Greene is a product of St. John Bosco High School in Bellflower, California. More than 20 Division 1 programs have offered the rising junior. The California product got to talk with Sarkisian and Nick Saban about his offer.

“Coach Sarkisian called and he told me about the offer,” Greene said. “I was told to call coach Saban the next day, just to make things official and I talked to him.”

“I was in awe most of the call because you know it is Coach Saban,” Greene added. “He is a legend and to see that he has an interest in me felt great.”

Alabama has pulled in a couple of offensive linemen prospects from the West Coast in recent years. The most recent one is the current Alabama offensive lineman, Tommy Brown. Although Jonah Williams is the name many people remember as he was a first-round draft pick in the 2019 NFL Draft.

Growing up, Greene has watched Alabama remain one of the top teams in college football and produce NFL talent. It is among the things, that stand out to Greene about Alabama.

“Alabama is practically a first-round factory and they have been dominant since I first started watching football,” Greene said. “So what is there not to like about them?”

At 6-5 and 310 pounds, St. John Bosco used Greene at the offensive tackle position as a sophomore. He was used as a lead blocker on several occasions as he paved the way for several big runs. According to most recruiting sites, he garners a 4-Star rating.

Alabama’s coaching staff will look to offer several more 2022 prospects as they attempt to fill out their 2022 recruiting board.