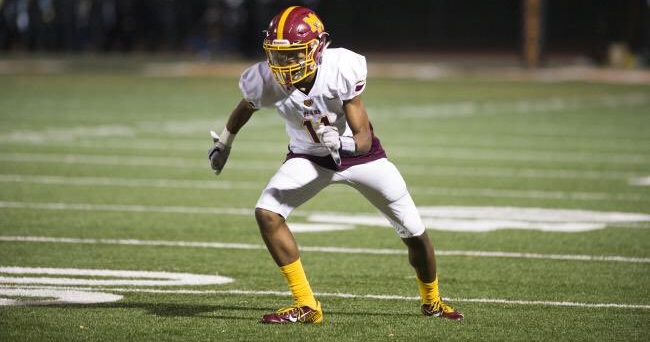 Alabama was included in yet another top-four Tuesday as 4-Star WR, Troy Franklin, announced his final 4.

The California product is down to Alabama, Oregon, Washington and Arizona State.

This journey has been the best ,, next time I’ll be committed ! Here’s my Final Four !!❤️ pic.twitter.com/KlrBExEYP9

The Crimson Tide is the only SEC team included in Franklin’s top four and is the only program not located on the West Coast. Franklin also included Alabama in a top 6 he released in April. LSU and USC were cut from his most recent list.

Alabama’s best chance at landing Franklin looks to rest on getting him on campus for a visit, which should be possible during the season. The 4-Star recruit did express he will choose from these four schools when he makes his commitment announcement.

At 6-2 170 pounder proved to be a playmaker during his junior campaign. Menlo-Atherton got him the ball in a variety of ways, including through screen passes.

Alabama has two verbal commitments from wideouts in the 2021 recruiting class. This is a position Alabama will take a close look at this cycle with multiple targets still on the board.