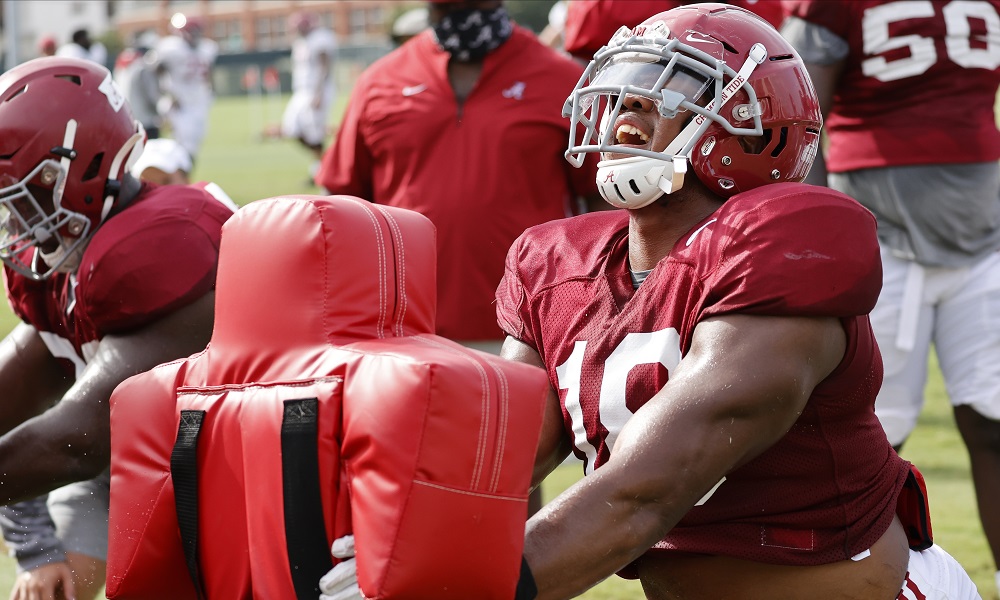 A foot injury limited him to three games in 2019, but LaBryan Ray is back.

He returns to a defensive line that is loaded with talent, depth and much hunger.

As the leader of the group, the redshirt junior and former five-star in the 2017 class looks to take Nick Saban’s message and push the front unit back to being the nastiest group in college football. Coach Saban told reporters that Alabama has to do a better job defending the run, holding opponents from scoring in the red zone, and getting pressure on quarterbacks.

Not having Ray for 10 games contributed to the issue, but he and his bunch have been locked in at fall practice.

RELATED: Alabama QB Mac Jones ‘works his ass off’ and is a ‘great leader’ for our team, per Alex Leatherwood

Prior to his injury versus South Carolina, Ray totaled nine tackles, one tackle for loss and one sack. He feels great about being back and knows the physicality starts up front, but Ray also understands great coaching helps too.

Freddie Roach, former Alabama linebacker (2001-05), was the lone on-field coaching change on Saban’s staff and Ray is enjoying his energy.

“He’s (Freddie Roach) is a great coach and a great man,” Ray said. “He demands the best of us and it has been a great experience for everyone in the room. He is a guy that is going to push us, but he’s going to tell us why. He is doing an outstanding job.”

After having success with defensive linemen and outside linebackers at East Mississippi Community College, Murray State, South Alabama and Ole Miss, Roach expects to restore the dominance to the Tide’s front.

During the 2015-17 seasons, Alabama collected 146 sacks — including 59.5 (40.7 percent)coming from its defensive line. It was this type of consistent pressure that led to the program winning College Football Playoff National Championships in both 2015 and 2017.

Along with getting his numbers up, Ray sees this unit as pass rushers by committee.

He touched on Justin Eboigbe and Byron Young, both of which started as a true freshmen.

“Both guys are great guys,” Ray said. “They come to work every day and last year, they took big strides. They are getting better every day and even in this fall camp, they are coming to work and doing their job.”

Christian Barmore, a redshirt sophomore, was the biggest enforcer on defense in 2019.

Regardless of seeing limited action, he broke through with 26 tackles, six tackles for loss, two sacks, five quarterback pressures and two pass breakups. The 6-foot-5, 310-pounder made the Freshman All-SEC team and anticipates becoming an All-American name in the fall.

“Christian Barmore is my guy,” Ray said. “He’s a great player. He is a big piece to the pass rush, but I think this year we will have to do it as a committee. As a group, we have to come in, come to work, play more physical, play with effort, and do our job on every play. We have to be the best version of ourselves.”

He knows the tone must be set by the defensive line, and Ray is seeing players take it seriously.

Not only is he looking to capture a national title, but Ray also wants a high draft stock. Should he be among the team leaders for sacks, NFL scouts and media pundits will look in his direction.