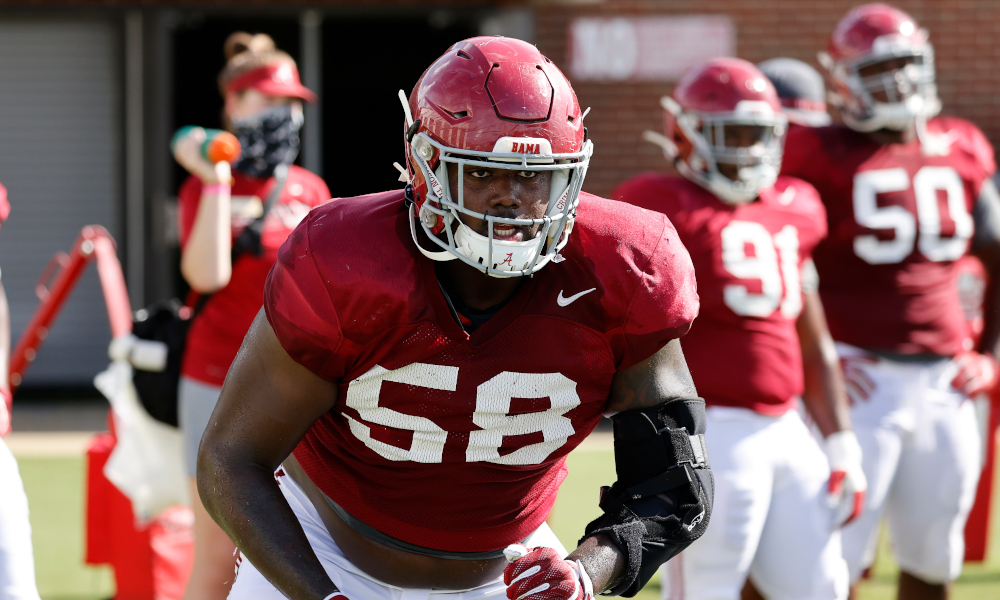 Alabama’s 38-19 victory of Missouri last Saturday came without one of its most talented players on the defensive front.

Redshirt sophomore Christian Barmore had missed the game and some practice time prior to it with a knee injury he suffered during fall camp.

On Wednesday during his press conference head coach Nick Saban provided some positive news in terms of Barmore’s status for Saturday’s matchup with the Texas A&M Aggies.

“We’re hopeful that he’ll be able to contribute during the game,” said Saban when asked about Barmore’s health.

Aggies head coach Jimbo Fisher noted during his teleconference on Wednesday that the team has prepared to face Barmore upfront.

Saban also gave some more encouraging news during his press conference, informing the media that safeties coach Charles Kelly is back with the team and feeling good after missing last week’s game against Missouri with an undisclosed illness.

Another illness Saban touched upon was that of tight end Major Tennison who did not appear during last Saturday’s game either. Saban revealed that Tennison has been sick with an intestinal issue and would have probably played ahead of some players who got in the game against Missouri.

But Saban also stressed that the team is comfortable playing multiple tight ends during the games.

“We like to play as many guys as we can at any position who can play winning football,” said Saban. “I think we played four guys, and Major Tennison would have played probably before some of those guys but he has been sick. Not COVID sick, but has got an intestinal problem that has really kept him off the field for a while. But he was doing extremely well before that.

“I think all these guys are capable, and we wanted to see what some guys could do in the game. If we had finished the game better, we could have played a lot more guys. So, we think we have three or four guys at that position that are going to contribute in some way, so we have no problem playing all of them.”

Alabama is set to kickoff against Texas A&M at 2:30 CT on CBS, marking the Crimson Tide’s first home game of the 2020 season.