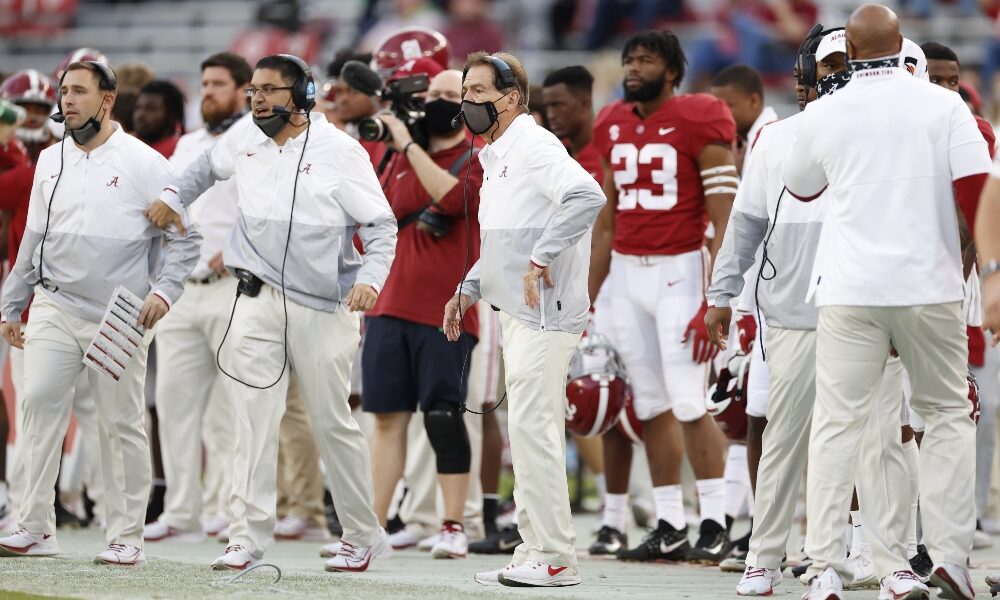 Following Alabama’s lopsided 63-3 victory over Kentucky, head coach Nick Saban hopped on the postgame zoom call to give his thoughts on the game.

During his statements, Saban gave a few injury updates to the team which a few members out of action.

Around the midpoint of the game wide receiver, Slade Bolden limped off the field after a punt return and had to be replaced by DeVonta Smith. Saban shed some light on the absence of Bolden for the remainder of the game.

“Slade twisted his ankle a little bit,” Saban said. “Don’t know what his status will be, but I don’t think it will be that bad but we don’t know for sure.”

Alabama has had to deal with numerous ankle injuries over the past few seasons which prompted the medical team to develop the tight-rope surgery that may be performed on severe high ankle sprains.

Another member of the Crimson Tide who didn’t see any action in today’s game was tight end Miller Forristall who had also suffered an ankle sprain.

“I know you are going to ask me about Miller Forristall. He has a sprained ankle, a little bit of a shoulder,” Saban said. “He could have played today. I just decided and told him ‘We will play you in an emergency if we need you. We need to get you healthy.’ Those other guys have been taking most of the reps in practice this week, so it gave them an opportunity to play. Some of them made some pretty good plays.”

One of those players who stepped up was sophomore Jahleel Billingsley who recorded three catches for 78 yards on the day including an impressive hurdle over a Kentucky defender.

“Jahleel is a really good athlete. He’s a really good receiver,” Saban said. “The main thing is consistency in performance with him. Every day, he’s gotta go out there and do things a certain way that we can trust him and depend on him. He had a really good week of practice and he played really well in the game today, made a couple of really nice catches.”