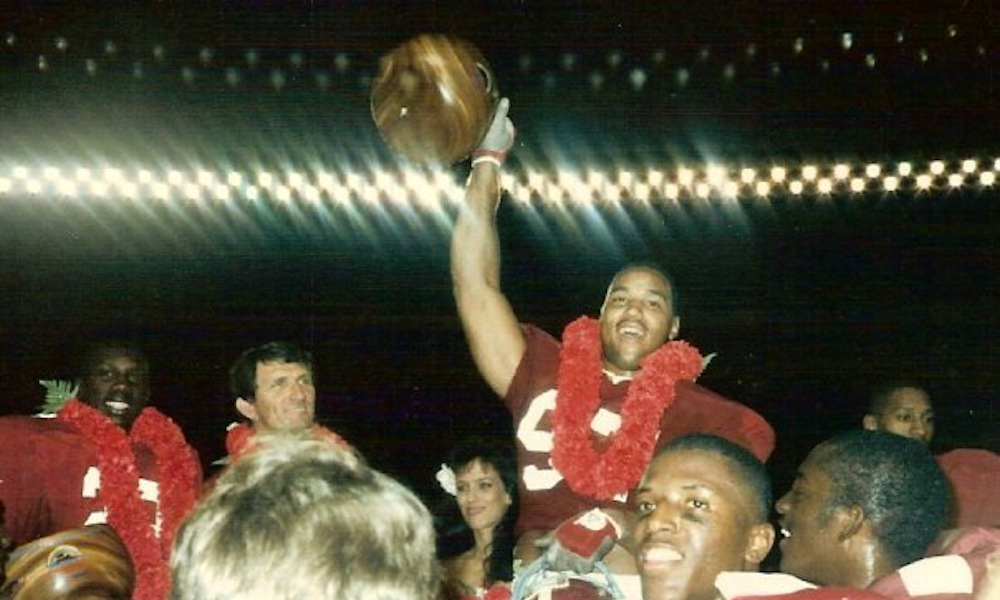 He is the reason why Derrick Thomas, despite his death, is in the College Football and Pro Football Hall of Fame.

He knew he was talented and Alabama’s coaches knew it too, but Thomas had to earn his keep from Cornelius Bennett.

RELATED: Alabama comes in at No. 1 in the first College Football Playoff rankings

Bennett not only challenged him, but his accomplishments were what Thomas strived for. A native of Birmingham, Ala., Bennett was a star in football, basketball and baseball at Ensley High School. When he got to the University of Alabama in 1983 as a freshman, Ray Perkins was happy to have him and the Crimson Tide program was grateful for him.

Through four seasons, Bennett was a defensive specialist and a nightmare for quarterbacks.

He collected 287 tackles — which is eighth all-time in school history — 21.5 sacks and three fumble recoveries. No one could stop him in 1986, as he totaled a single-season mark of 10 sacks. The record stood until Thomas surpassed it with 18 sacks in 1987 and 27 sacks in 1988. Bennett’s most memorable play from that season was viciously dropping Steve Beuerlein of Notre Dame to the ground. Now immortalized in a Daniel Moore painting, “The Sack” is probably still in Beuerlein’s mind and bones.

Bennett went to three bowl games in four years with the Tide.

While he was a three-time first-team All-American (1984-86), three-time All-SEC selection (1984-86), SEC Player of the Year (1986), Lombardi Award winner (1986) and a seventh place finisher in the 1986 Heisman voting, Bennett has finally achieved major status from his time in the National Football League. According to an announcement from the Pro Football Hall of Fame, he is one of 25 former players named a semifinalist for the Pro Football Hall of Fame Class of 2021.

After an amazing collegiate career, Bennett was taken at No. 2 overall in the 1987 NFL Draft by the Indianapolis Colts.

He played one season for the franchise, but spent nine years (1987-95) with the Buffalo Bills.

At outside linebacker, Bennett helped the team to four Super Bowl appearances. He was selected to five Pro Bowls, earned three first-team All-Pro honors (1988, 1991, 1992), was a two-time AFC Defensive Player of the Year (1988, 1991) and was named to the Bills’ 50th Anniversary Team. He appeared in a fifth Super Bowl with the Atlanta Falcons in his three seasons (1996-98) and finished his career with the Colts from 1999 to 2000. According to the NFL record books, Bennett played in 206 career games and had 1,190 tackles, 71.5 sacks, 31 forced fumbles and seven interceptions in his illustrious tenure.

He thoroughly enjoyed football, whether it was high school, college or professional.

Bennett helped a friend and a competitor into the Pro Football Hall of Fame.

Now, Thomas looks down to soon see his mentor accept a coveted gold jacket. As of 2004 and 2005, Bennett has been inducted into the Alabama Sports Hall of Fame and the College Football Hall of Fame.