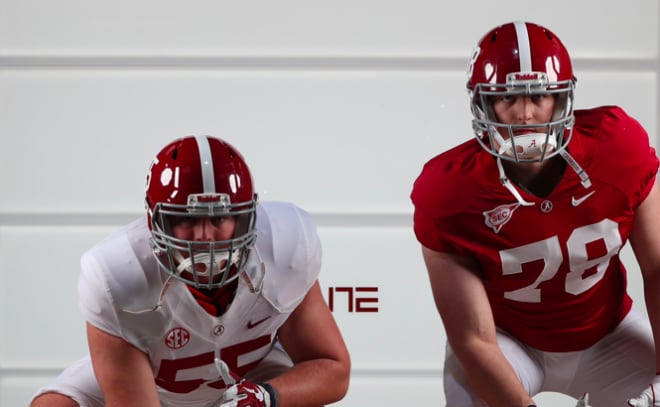 James and Tommy Brockermeyer signed their National Letter of Intents to play football at the University of Alabama Wednesday.

James is rated as a 4-Star recruit, and Tommy is listed as a 5-Star, according to Touchdown Alabama. The twins chose Alabama over their father’s Alma Mater, Texas and others. James told Touchdown Alabama the confidence they have Alabama’s staff factored heavily in their decision.

“Honestly, it was everything about it from the strength and conditioning program,” James said. “We got a chance to talk with Matt Rhea and David Ballou. I have confidence in Kyle Flood (Alabama’s offensive line coach). I really like what he is doing along with what Nick Saban has been able to do there. It is nothing short of elite. It is just an awesome opportunity.”

Alabama plans to line James up at center, but he can play multiple positions across the offensive line. He finishes blocks and likes to bullies defensive tackles.

Tommy will most likely play tackle. At 6-foot-6 and 283 pounds, he has the frame of a typical tackle but will benefit from adding on some weight. He knows how to make himself wide and moves extremely well laterally. He can also finish blocks and gets ti the second level.

The twins spent their senior year learning under their dad, Blake Brockermeyer, who is a former NFL offensive lineman. Blake said he teaches offensive linemen a bit different than others.

“I sort of teach a bit different from what everyone else is teaching,” Brockermeyer said. “I know Kyle Flood at Alabama will most likely teach more of it this season at Alabama. the pass protection and run block techniques I teach a bit different than normal. Defensive linemen have gotten so good, that you can not do the things I use to do. You have to change it up. I have just really been working with them on muscle memory and their brains.”

James and Tommy will enroll at the University of Alabama in January as early enrollees.