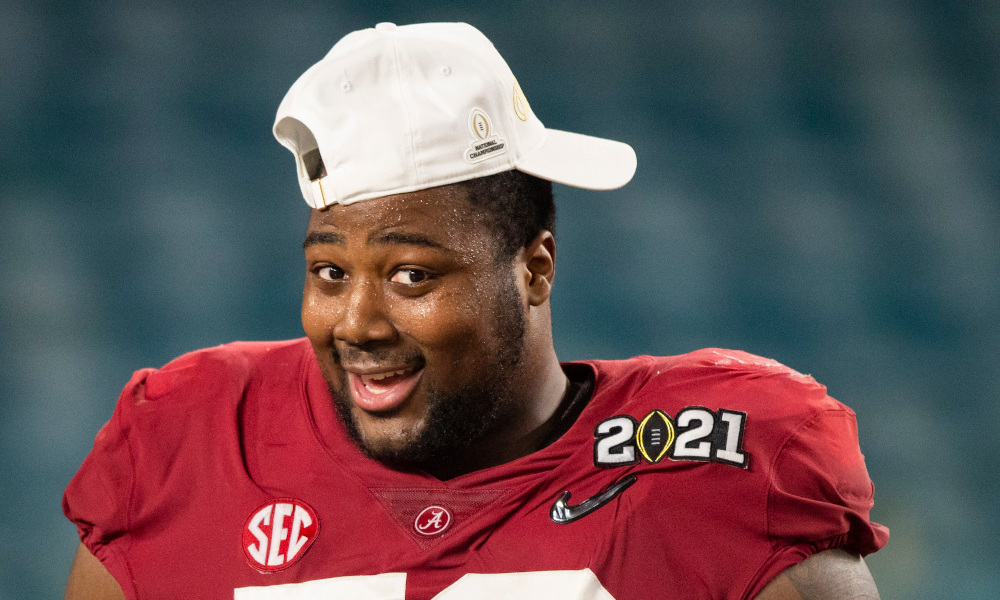 Following a victory over Michigan in the Citrus Bowl to end the 2019 campaign, Christian Barmore found himself back in his hometown of Philadelphia (Pa.) with Coach Troy Gore. He trained with Gore throughout his high school tenure and it got Barmore the recognition of being a four-star recruit, upon coming to the University of Alabama in the 2018 signing class.

No matter what drills or exercises were thrown at him, Gore put the massive beast to work.

When he returned to the Crimson Tide in the fall, Barmore was set to be a consistent threat.

The 6-foot-5, 315-pounder showcased his worth all season on the defensive line. He sacked quarterbacks, put fear into the hearts of running backs, and brought a universal sense of energy to Alabama. After showing he was deserving of attention in 2019, Barmore grew in discipline and morphed into a first-team All-SEC selection.

As a redshirt sophomore, he turned in his finest performances from the Georgia game throughout the remainder of last season — however, Barmore’s prominent work was his latest outing in the CFP title game.

Tide fans were nervous about Trey Sermon, but Barmore ended that quickly.

Sermon, a running back for Ohio State, was knocked out of the game in the first quarter.

He sustained a collarbone injury and did not return to action. With him out, the beast from Philly harassed Justin Fields all game long at Hard Rock Stadium. Barmore collected one sack and two tackles for loss, to pair with five total stops.

Upon placing his first hit on Fields, he forced the talent quarterback to be out of rhythm and out of his element. Not only did Barmore affect the Buckeyes’ passing game, but he also led the charge on two critical fourth down stops for Alabama’s defense. He surged into the backfield for a huge tackle for loss against Master Teague III on a fourth down, while assisting the Tide to eight stops (Ohio State, 6-of-14 conversions) on third down.

Barmore was a handful for Ohio State and in Alabama earning a 52-24 victory on Monday night, he was awarded the Defensive Most Valuable Player of the game. He collected 37 total tackles (9.5 for loss), eight sacks, three pass breakups, six quarterback hurries and three forced fumbles in 13 games. Barmore could benefit from the COVID-19 year and return next season, but the game he had positions him to be a first-rounder for the NFL Draft. The Tampa Bay Buccaneers have the 25th overall pick and its defense is in need of pass rushers. He has until next Monday (Jan. 18) to make a decision on whether he will declare for the draft.

For now, Barmore is a national champion and is celebrating with his family.