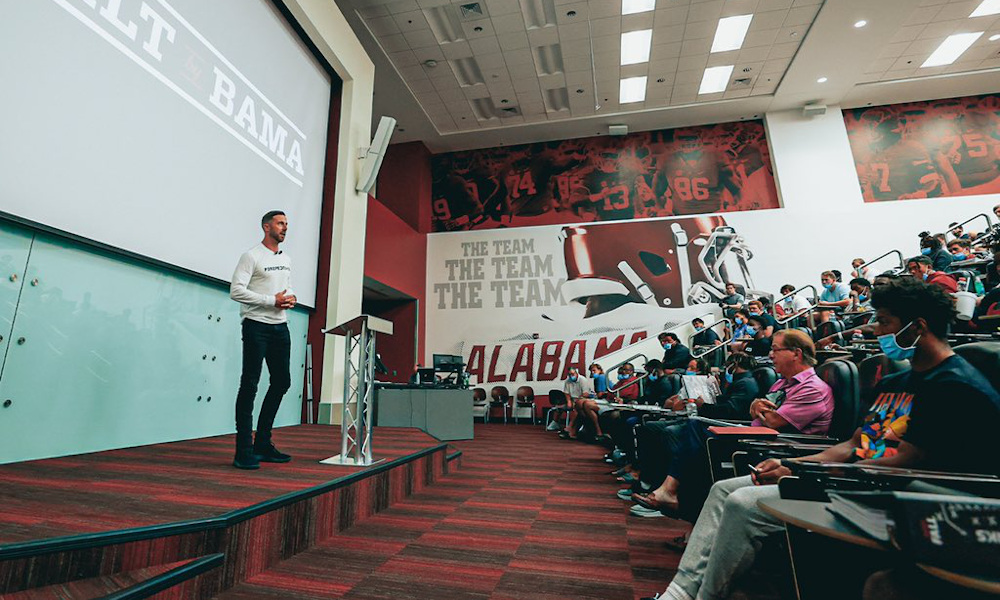 When you thought motivational speakers could not get better than Kobe Bryant, Michael Jordan, Stephen A. Smith, Ernie Johnson, and Alex Rodriguez, Nick Saban pulled out another guest for the Alabama football program.

The topic was “Perspective,” and no one knows it better than Alex Smith. He played quarterback for 16 seasons in the National Football League after being the No. 1 overall pick in the 2005 NFL Draft. Smith’s toughness earned the respect of his teammates and coaches. During his time with the San Francisco 49ers, Kansas City Chiefs, and Washington Football Team, he played quality football and mentored others. He helped Colin Kaepernick lead the 49ers to the Super Bowl in 2012, and he prepared Patrick Mahomes II to be a star for the Chiefs. Mahomes credits Smith for sharing everything with him on how to be a professional.

Thank you, Alex Smith for stopping by and talking to our team!#BamaFactor #RollTide pic.twitter.com/lG7TRfmH1h

Smith would get a chance in Washington, but his career and life almost ended on Nov. 18, 2018.

In a matchup against the Houston Texans, Smith was sacked by Kareem Jackson and J.J. Watt.

He suffered a spiral and compound fracture to the tibia and fibula of his right leg. Smith had to fight for his life in the hospital as flesh-eating bacteria resulted in sepsis in his leg.

He went through 17 surgeries, including eight debridements and four separate hospital stays in nine months. He missed the 2019 season but rehabbed and returned for 2020. Smith thought he would never play football again; however, he kept a positive perspective.

RELATED: Alabama players are buying into the Bill O’Brien offense

He ended up playing in eight games last year, including six starts. Smith was 5-1 for Washington, led the team to the playoffs, and was the NFL’s Comeback Player of the Year.

Sometimes people have to face adversity, but how will they respond? This is a lesson in football and life that Saban teaches his players.

He constantly preaches mental toughness and having the right resolve.

Smith carried the trait well, and it was important for him to talk about it. Many negative options were available to Smith as he fought for his life and contemplated a return to football, but he stayed hopeful. This mindset allowed him to return to the game he loved and retire on his own terms. ESPN did a documentary on Smith journey to the NFL, and his fight to return from the injury.

Alabama will face adversity this season as it tries to repeat as national champions of college football.

Things like NIL and the transfer portal have been a distraction for some, but can the Tide remain focused? This is what Saban wants his team to do.

It was good to see Smith come and talk about keeping the right perspective.