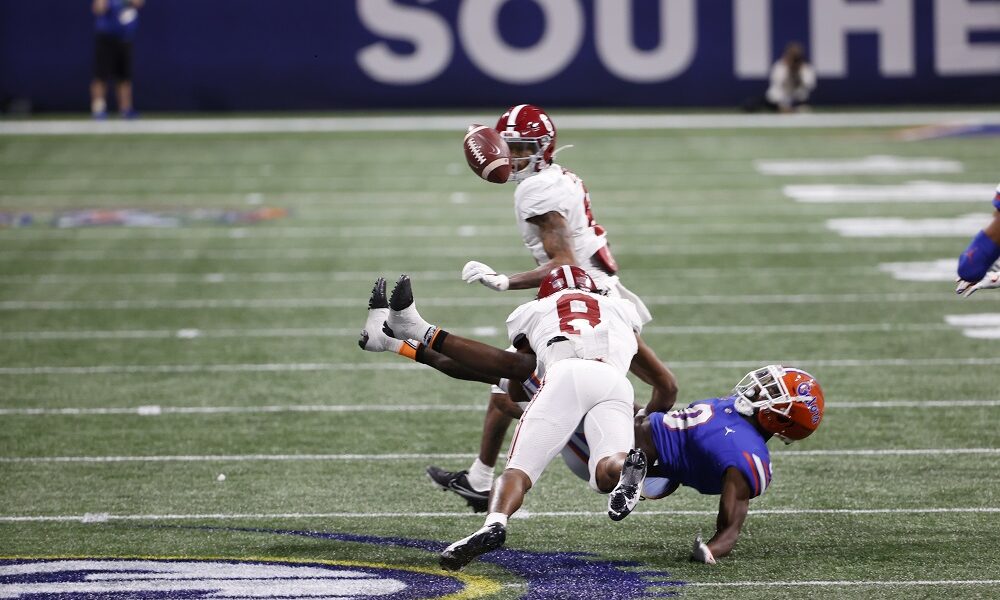 As fans prepare for Saturday’s top 25 matchup between No. 1 Alabama and No. 11 Florida, Crimson Tide fans can revisit last seasons SEC Championship game between the two schools which gave college football supporters a 52-46 shootout in Atlanta.

One of the biggest plays from the game and one Alabama fans will long remember (especially when the Gators are next on the schedule) is the forced fumble caused by John Metchie’s massive hit on Gators defensive back Trey Dean.

Midway through the first quarter, quarterback Mac Jones was intercepted by Dean on a pass in the redzone. Dean with aspirations to return the pick, took things towards the sidelines but was unaware of Metchie who laid the lumber on the unassuming Dean.

The ball was jarred loose and wide receiver DeVonta Smith recovered which gave Alabama another shot to score which ended up coming on the next play.

Stop us if you've heard this one before: Touchdown DeVonta Smith! pic.twitter.com/b9yH5yA5gO

The play now lives in infamy in Alabama, and fans will be looking to create new long standing memories as the Crimson Tide kickoff against Florida in Gainsville,FL, this Saturday at 2:30 p.m. CT on CBS.