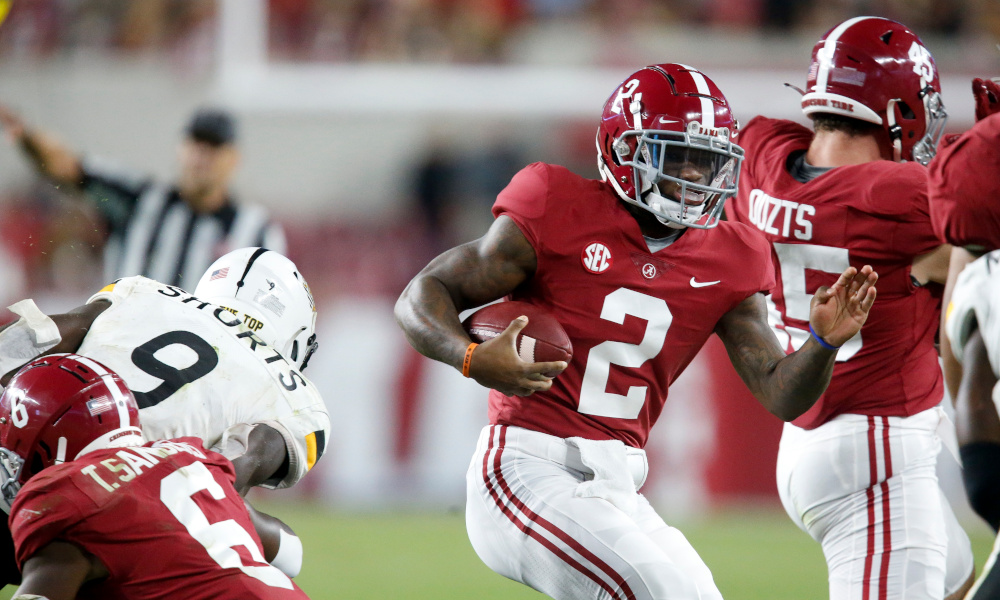 RELATED: Top 10 passing plays for Alabama football from the 2021 season

We will be highlighting early spring positions battles and which players will earn starting roles. Bryce Young returns as the starting quarterback, but who wins the primary backup job between Jalen Milroe and Ty Simpson?

We dissect the No. 2 signal-caller role for spring ball.

Jalen Milroe will enter spring practice with something to prove.

Ty Simpson’s high school tape has Alabama fans excited about what he can do.

He possesses the ability to create entertainment with his skill set, but Milroe has a year of experience in the Crimson Tide’s offensive system. Milroe, a native of Katy, Texas, arrived in Alabama’s 2021 signing class as a four-star quarterback. He entered as one of the best dual-threat prospects in his class, totaling 3,825 passing yards, 559 rushing yards, and 53 touchdowns.

Milroe played in four games for the Tide in 2021.

He completed three passes on seven attempts for 41 yards, including a 24-yard touchdown to receiver Javon Baker (now at Kentucky) versus Southern Mississippi. Milroe displayed his athleticism, posting 15 carries for 57 yards as a freshman.

He is a powerful runner with the quickness to evade defenders.

Milroe brings a big arm in the passing game, but we will see how his accuracy has improved. The 6-foot-2, 212-pounder dominated Alabama’s weight training program last summer. He continues to show his incredible strength and is not afraid to use his legs to make plays. Milroe prefers to scan the field and make throws from the pocket, but he will take off and run.

Bryce Young and Simpson have attention on them. Milroe is poised to reintroduce himself.

Jalen Hurts and Tua Tagovailoa electrified the crowd at Bryant-Denny Stadium as freshmen in their spring football performances.

Hurts won hearts over in the 2016 A-Day game and became the first freshman starter at quarterback in the Nick Saban era.

Tagovailoa brought new meaning to the passing game in 2017, and the native Hawaiian introduced “joyless murderball” to Crimson Tide fans. Ty Simpson has the “wow” factor that could take the crowd in the spring game. His scrambling, playmaking, athletic abilities resemble Johnny Manziel, Ty Detmer, and Fran Tarkenton. Simpson can generate plays out of rough situations.

He did that in his career at Westview High School in Martin, Tenn. Simpson guided the program to a Tennessee Class 2A State Championship in 2021 – recording 2,827 passing yards, 862 rushing yards, and 52 touchdowns.

He won the Gatorade Player of the Year for the state of Tennessee. As a five-star, Simpson had 4,715 passing yards, 1,173 rushing yards, and 61 touchdowns in his high school tenure. He enrolled early at the University of Alabama to compete in spring ball.

He is okay waiting his time, but he is very confident in what he can do.