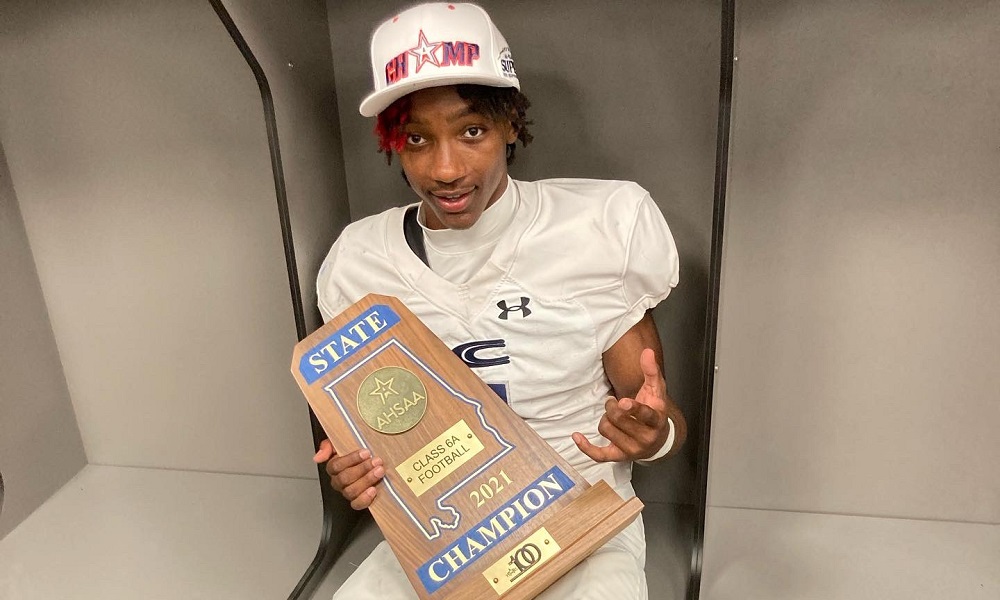 Clay-Chalkville’s speedy sophomore wide receiver, Mario Craver felt like he belonged in Tuscaloosa during his visit to the University of Alabama Saturday to watch the Crimson Tide’s spring game.

Craver currently holds 13 D1 offers after he helped the Cougars win the 2021 Alabama 6A State Championship. The Crimson Tide offered Craver in January when he visited for Junior Day. The 2024 recruit’s first trip to Alabama since picking up an offer from the Tide was a success.

“It was a good visit, and it feels like home now,” Craver told Touchdown Alabama.

Craver’s remarks come after he expressed Alabama was the top program he visited earlier this year.

“Alabama is by far the best program I have been to,” Craver said after picking up an offer from the Tide in January. “It seems like they take better care of their players than they do themselves. The facilities were definitely top-notch as well.”

“I think I will be a great fit,” said Craver. “I do not see a dynamic receiver like they have had over the past few years, and I think I can come in and be that player.”

I was blown away by 2024 WR, Mario Craver @MarioCraver at the Under Armour Camp today.

Kid has elite speed and can create some separation.

Check out his and other Alabama targets top moments from the event.https://t.co/fdRkVHYwI2 pic.twitter.com/ZHr2H5mVan

Craver is listed at 5-foot-11 and 160 pounds. He pulled in 46 receptions for 937 yards and 10 touchdowns as a sophomore. The Alabama target is one of the fastest wide receivers in the 2024 recruiting class, and he is a dangerous wide receiver before and after the catch with his superb route-running skills and acceleration.

Alabama will make recruiting in-state a major part of its recruiting efforts in the 2024 recruiting cycle, and Craver will be one of their top overall targets in the cycle.