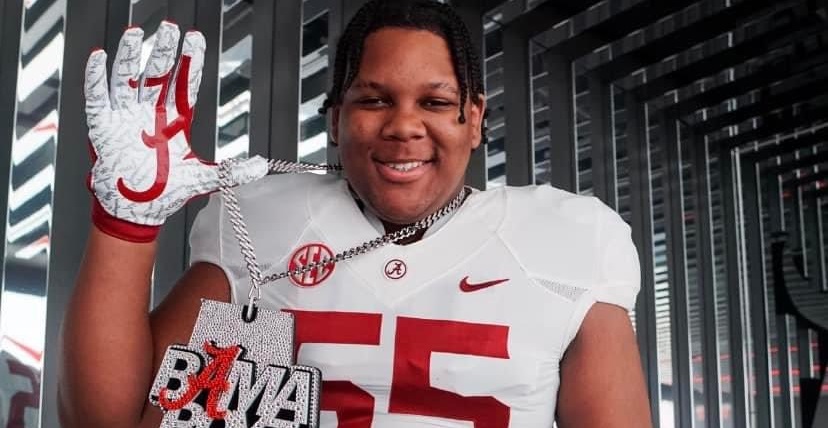 Ryqueze McElderry announced his commitment to Alabama football Monday after de-committing from the Georgia Bulldogs over the weekend.

McElderry attends Anniston High School in Anniston, Alabama, and he is the Crimson Tide’s tenth commit in the 2023 recruiting class. The Anniston product is the fifth in-state prospect to commit to the Tide, and he is Alabama’s second 2023 offensive lineman pledge. Touchdown Alabama will have McElderry rated as a four-star recruit in our own independent recruiting rankings.

Alabama offered McElderry few days before he announced his commitment to Georgia in November. He said Alabama was his dream school after the Tide offered.

“I was excited because they have been my dream school,” McElderry said. “I have been dreaming about getting an Alabama offer ever since I was a little kid. They are one of the top programs in the nation.”

Nick Saban and company continued to make a hard push for McElderry over the next few months. He visited Alabama several times, including a trip in March, where he felt like he was wanted by Saban.

“I feel his (Nick Saban) message was that he really wants me really bad, that he wants me to come to Alabama and that he needs me to play guard there,” McElderry said.

The new Alabama commit currently stands at 6-foot-4, and he weighs approximately 320 pounds. He primarily lined up at tackle for the Bulldogs during the 2021 football season, but he is projected to be an interior offensive lineman at the next level. He is a physical offensive lineman, who finishes blocks by continuing to drive up the field.