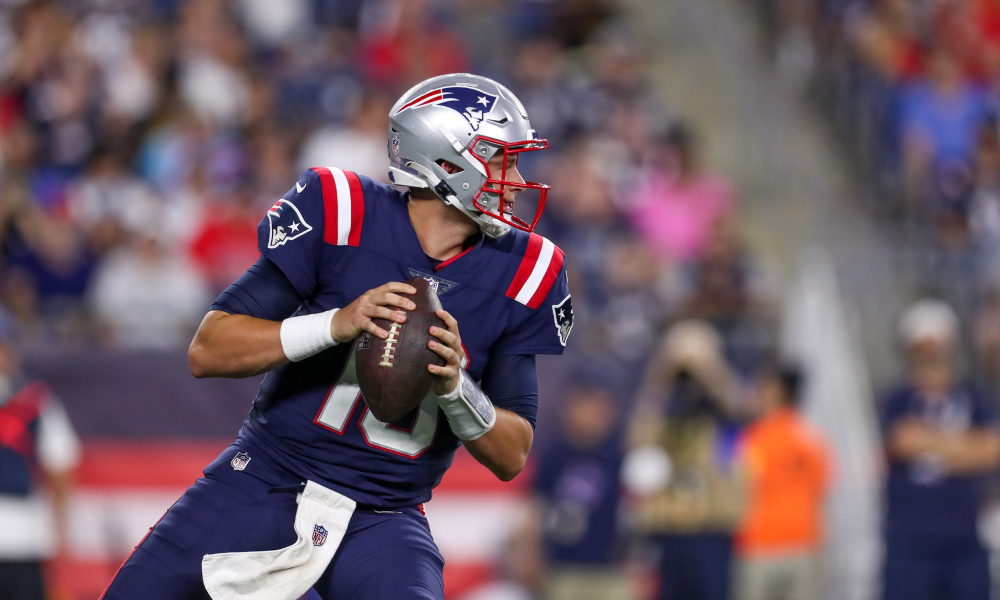 As he prepares for his second season in the NFL, Patriots quarterback Mac Jones is doing everything he can to avoid a sophomore slump. Following an impressive rookie campaign that resulted in Jones aiding New England to the playoffs, the former Alabama quarterback was the talk of OTAs.

But even when practice isn’t in session Jones has taken it upon himself to hold private workouts with the team’s receives to further build chemistry.

Patriots starting center David Andrews raved about the quarterback’s willingness to improve during an appearance on 98.5 The Sports Hub’s “Zolak and Bertrand” on Friday.

“The kid’s a hard worker,” Andrews said according to Boston.com. “He works his butt off, day in and day out. Sometimes I just try to get him to take a deep breath. But that’s what you want out of your quarterback. He works really hard. He’s a tough kid. It’s been fun for me the last year, year and a half, to get to know him.

“I’ve got a lot of respect for how he does things and how he carries himself.”

Jones will have some new faces to work with this season as the team added former Miami Dolphins wide receiver DeVante Parker along with selecting receiver Tyquan Thornton in the second round of the NFL Draft. The offensive coaching staff also went through a bit of a shake-up during the offseason as Jones’ offensive coordinator Josh McDaniels became the head coach of the Las Vegas Raiders. McDaniels’ position will be filled by a combination of former Patriots defensive coordinator Matt Patricia and former special teams coordinator Joe Judge.

Even with the moving parts, the team will continue to focus on the tasks in front of it.

“We’re all here for the same common goal. It starts whenever we report [for training camp], that’ll be day one. We’ll keep working on it and keep improving it. We’ll try to keep getting better throughout the season and not have that kind of lull that we had last season.”

The Patriots report to training camp on July 26.