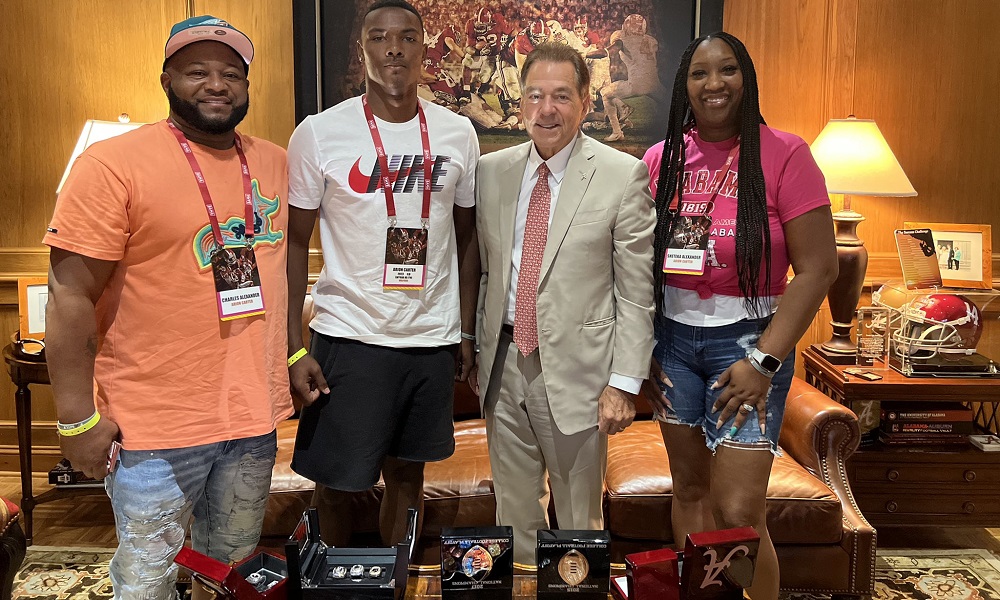 Arion Carter announced he received an offer from Alabama Saturday during a visit to UA.

After a great visit and conversation with Coach Saban I am extremely blessed to receive an offer from The University Of Alabama!!!🐘🔴⚪️ @TNSelect7V7 @smyrnafootball @AlabamaFTBL pic.twitter.com/5dHdcM61fb

Carter attends Smyrna High School in Tennessee, and he is currently verbally committed to the Memphis Tigers. His recruitment is trending upwards halfway through his senior season despite his pledge to the Tigers. He currently holds more than 20 D1 offers, including recent offers from Kentucky, Tennessee, Alabama and USC.

Nick Saban informed Carter of his offer from the Crimson Tide during his Saturday visit. The Tennessee native told Touchdown Alabama Sunday it felt good to earn an offer from Alabama.

“It felt amazing, just an opportunity every recruit in the country wants and pleads for,” Carter said. “The opportunity itself, playing at Alabama and getting an education at Alabama but not only that, the opportunities on the field and the opportunity to get developed as a player are amazing. It is an amazing program, a phenomenal program, especially with the background and the history they have. As far as the players that are there, the culture is different. They are a player-led team. From being in the locker room before and after the game, you can tell they take care of business and lock in. It is Alabama. It is built to make players. The culture and everything as a whole are great. Meeting with the players and talking with them just showed their maturity. It is something I would want to be a part of.”

Saturday’s visit allowed Carter to meet Nick Saban, and the senior walked away impressed with the Alabama head coach.

“He is the same guy in person that you see on t.v.,” Carter said. “He is what he presents himself as. I really respect that. He is a real person. He is never going to sugarcoat anything. From the first few moments of that day, just speaking with him it came together why he is the man he is and why he is so great.”

At 6-foot-1 and 210 pounds, Carter is projected to be a linebacker at the next level. Saban told the rising prospect he liked his ‘lateral movement, speed, his change of direction and backside pursuit.’ Saban used the visit to verify Carter’s height.

Carter plans to continue focusing on his senior football season and take multiple official visits towards the end of it. He is hopeful that he will be able to sign with the school of his choice in December.