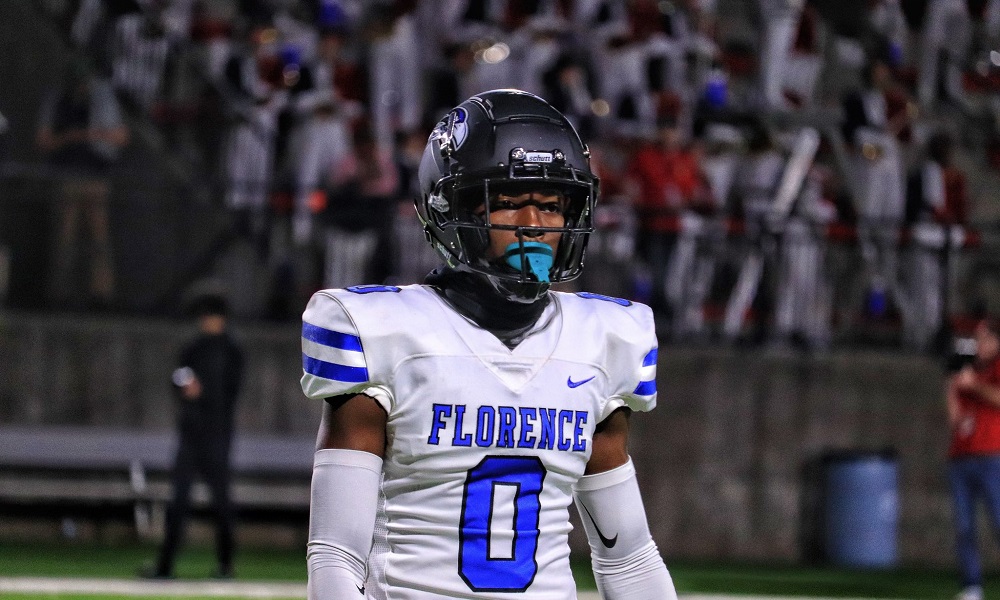 Jahlil Hurley has made some big plays this season for Florence High School, and he is excited to join Alabama football in a few months.

The Crimson Tide picked up a commitment from Hurley in January. He is the Tide’s longest-standing commit, and he chose Alabama over Georgia, Auburn and others. With pledges from Hurley, Tony Mitchell, and Caleb Downs, Alabama’s 2023 defensive back class is loaded.

Hurley told Touchdown Alabama Friday he is looking forward to enrolling early at UA and teaming up with Downs and Mitchell in the future.

“It has been a wonderful journey,” Hurley said. “I am excited to get down there in January and get started. I am excited because that is three big guys we can put into the secondary and help it grow, hopefully, win some Nattys up there and get to the league.”

Alabama’s defensive line coach Freddie Roach and Nick Saban have been recruiting Hurley for multiple years. It is widely known Saban is hands-on with Alabama’s cornerbacks and Hurley is thankful for the opportunity to work under the Alabama head coach at the next level.

“I am grateful,” said Hurley. “All glory to god. He put me in a position to play for the greatest coach of all time, just blessed.”

Florence has used Hurley on both sides of the football this season. The Alabama commit has made his fair share of plays in every facet of the game, including on special teams. He sealed up the Falcons’ latest win by blocking a late game-tying field goal attempt.

“I just lined down and did my job, did what my coaches needed me to do,” Hurley said. “That is what we do in practice, go after blocks, and we came out victorious.”

Blocks the FG for the Florence win. pic.twitter.com/Abfn94YsVI

At 6-foot-3 and 170 pounds, Hurley has a long frame with long arms, and he is projected to be a cornerback for Alabama football in the future. He is one of the most technically-sound defensive backs in the 2023 class. The five-star is using his senior season to become a better all-around defensive back.

Super instinctive. Has made plays on both sides of the football tonight. pic.twitter.com/sT2Dj3JUAQ

Alabama is still recruiting several 2023 recruits, and Hurley has his eyes on a few guys.