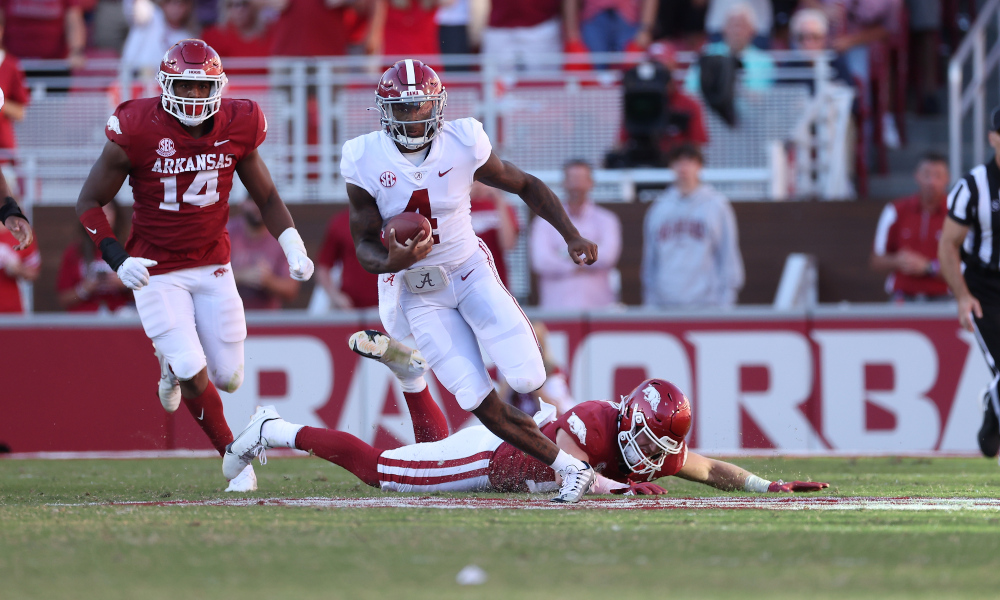 Bryce Young suffered a sprained AC joint to his throwing shoulder in Alabama’s matchup against Arkansas.

Coach Nick Saban said the Crimson Tide’s junior quarterback is ‘day-to-day,’ but he has been doing more in practice each day throughout this week. Young, the reigning Heisman Memorial Trophy winner, recorded 173 passing yards and two touchdowns before the injury. Jalen Milroe, a second-year quarterback from Texas, replaced Young in the second quarter versus the Razorbacks. He pulled the momentum back to the Tide with a 77-yard run in the fourth quarter, and Alabama finished the possession with a touchdown run by Jase McClellan. Milroe has some areas in the passing game he can improve on, but he collected 65 passing yards, 91 rushing yards, and two touchdowns in a 49-26 victory. The Tide has a decision to make this week between Young and Milroe for Texas A&M. CBS Sports will have the matchup at 7:00 p.m. CT at Bryant-Denny Stadium.

RELATED: Paul Finebaum says Texas A&M is a ‘cupcake game’ for Alabama and not to be taken seriously

Saban and the players have confidence in Milroe if he has to start the game.

“I think the players have responded well to what he has to do,” Saban said on the team having confidence in Milroe. “What we try to get our guys to focus on is doing your job. If everyone does their job, we will have a chance to be successful. It does not matter who’s playing, I have to do my job. Sometimes that’s harder to do for guys who are not starters, but I think it is a test of your character if you can do it. I think Jalen did a good job last week, and I hope we can build on that if he has to play this week.”

DeMarcco Hellams, a senior safety, said Milroe is ‘a challenge’ for any defense with his skill set.

“He may be a quarterback, but he’s always going to be one of the best athletes on the field,” Hellams said. He’s fast, he can throw, he’s definitely a challenge for a defense to contain because he brings a great aspect of throwing and running. He’s a problem in both of those.”

Emil Ekiyor Jr., a veteran offensive lineman, blocked for Milroe against Arkansas. He said the players and coaches have the utmost confidence in Milroe.

“We all see him make plays in a game,” Ekiyor said. “He makes plays in practice, and we expect him to do the same in this game.”

Will Anderson, a junior linebacker, spoke highly of Milroe’s athleticism.

“He is very hard to tackle,” Anderson said. “He can move really well, he has great feet, and he can escape the pocket.”

Alabama’s coaching staff, players, and fans trust Milroe’s ability. We will see if he starts Saturday against the Aggies.