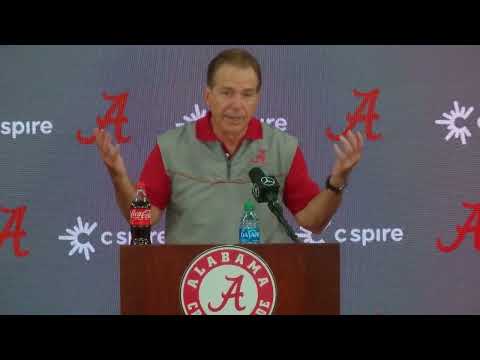 Alabama head coach Nick Saban will travel to the place on Saturday he built into a success story.

Saban coached at Louisiana State University from 2000 to 2004, leading the program to a BCS National Championship in 2003.

Tiger Stadium, better known as “Death Valley,” reeks of hatred from his decision to leave.

LSU fans do not care for Saban and Brian Kelly was hired to be the one to try and consistently defeat him. Alabama opened this year’s College Football Playoff rankings at No. 6 in the nation, but all its dreams are in front of it. The opportunity to win the SEC West, win an SEC Championship, and capture a CFP National Championship is available. Saban knows the Tide must play with a sense of urgency, and he spoke about maintaining intensity at Wednesday’s press conference. Alabama has not kept its fire on the road; however, it has another chance to show it can dominate away from Bryant-Denny Stadium. When the Tide and Tigers have both been successful, the rivalry game has led to the deciding factor of who wins the SEC West and plays for a national title.

ESPN will have the call at 6:00 p.m. CT this weekend. Check out the video above from Saban’s presser.