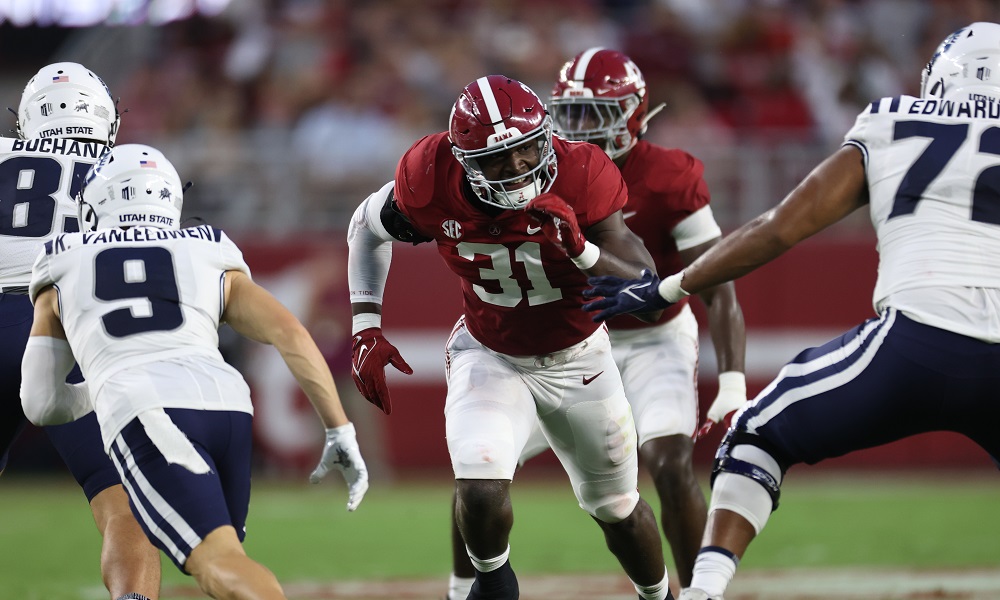 Pro Football Focus honored a freshman for Alabama football by naming him to its All-True Freshman Team.

After showing love to offensive lineman Tyler Booker, the website has returned with its All-America Defensive Team. PFF had three Crimson Tide athletes named for this honor. Will Anderson (edge), Kool-Aid McKinstry (cornerback), and Brian Branch (flex) got recognized. Anderson, a junior linebacker, is a finalist for Bronko Nagurski, Chuck Bednarik, and Lott IMPACT awards.

He won the Nagurski Trophy in 2021 as the nation’s top defensive player. Anderson has 51 total tackles, including 17 tackles for loss (team-high) and 10 sacks (team-high). He also has 12 quarterback hurries (team-high), a pass breakup, a blocked field goal, and a pick-six. McKinstry turned in a strong sophomore campaign, totaling 34 tackles. He has two tackles for loss, a sack, 12 breakups (team-high), and an interception. McKinstry also has 317 punt return yards on 20 attempts, averaging 15.8 yards.

RELATED: Alabama fans react to all players in the transfer portal from November

Brian Branch, a junior defensive back, is arguably the best player in Alabama’s secondary. He stands third on the team for total tackles (78) and has 10 tackles for loss with two sacks. Branch has seven breakups and two quarterback hurries.

All three players helped the Tide position itself for a chance to be in the College Football Playoff if chaos happens.