1. Quarterbacks: [D-] As a journalist, I am going to be absolutely honest. Outside of AJ McCarron, I don’t see anyone else who looks comfortable and confident at the quarterback position. I completely understand that A-Day is just a spring game, but when you are coming off of back-to-back National Championships and three in a four year span, the coaching staff and fans expected you to put your all into the game. McCarron’s stats from the spring game weren’t as crisp as I would have liked them to be, but he did have the only touchdown pass of game to lead all QB’s. McCarron went 19-30 passing for 223 yards, one touchdown and two interceptions.
Blake Sims needs to be in quarterback camp this summer because he needs to understand how to make smart decisions with the football. Fans, coaches, and I know that Sims can run the ball well, but to be an effective quarterback in the SEC you must be able to pass the ball efficiently. To this point, Blake Sims cannot do it. He made some horrible decisions with the football, including throwing two interceptions.
Despite the sloppy play, I did see some good things happen from the QB position at the Spring Game. Freshman quarterbacks Alec Morris and Luke Del Rio made some positive plays in the game. Both used their check downs well and on the last possession of the game for the Crimson team, Morris drives them down field the 11-yard line of the White team and almost won the game for the Crimson team.

2. Defense: [A+] While everyone was talking about how great Alabama is going to be offensively and it’s true because of the talented guys that Coach Saban has recruited along with the players returning from this past season, it was the Crimson Tide defense that showed up on A-Day ready to play. Defensive backs Nick Perry, Vinny Sunseri, Landon Collins, and Ha’Ha Clinton-Dix did a phenomenal job reading the eyes of the quarterbacks and being at the right place to create turnovers. Alabama’s defense forced nine turnovers (6 interceptions, 3 fumbles) and Vinny Sunseri intercepted QB AJ McCarron and returned 87 yards to pay dirt.

Once again it is spring and I thoroughly understand that, but Alabama has to clean up some things offensively if they even want to think about a possible 3-peat. Personally, Alabama needs to get Blake Sims, Cooper Bateman, Alec Morris, and Luke Del Rio into some quarterback camps and work with them on decision making, precision, accuracy, and the fundamentals on how to be an effective QB in the Southeastern Conference. 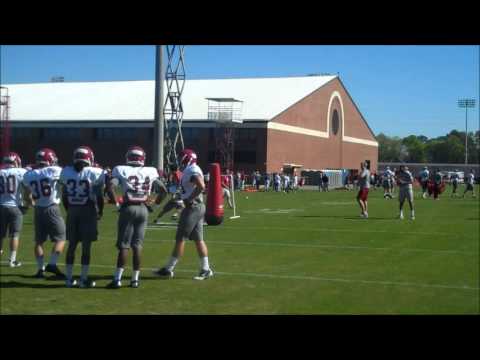