Since 2006, a pattern has developed between college football and the NFL. In the past six years, one conference has dominated the NFL Draft and ironically it is the same conference that has won the BCS National Championship six years in a row.  As far as football goes, the NCAA has 12 major conferences: SEC, BIG-10, BIG-12, PAC-12, ACC, Big East, C-USA, Western Athletic (WAC), Mountain West (MWC), Mid-American (MAC), Sun Belt, and Independence.  For most guys, between the ages of 18-22, their mindset is to play in a conference that is known for toughness, passion, skill, tradition, character, excellence, and most importantly winning. These qualities can be found down south in the heart of college football known as the Southeastern Conference. Most coaches in college football believe that the SEC is full of propaganda and is over hyped, but to be honest if anyone was to survey a group of high school seniors and ask them what school would they want to play for, it would a no brainer that they would chose an SEC school. With this being said many people are still shell-shocked and find themselves asking the question, “Out of the 12 major conferences in college football, why do these students pledge their allegiance to the SEC?” The answer to this question goes far beyond the gridiron. Though the SEC reigns supreme in winning championships, it also reigns in recruiting. Let’s be honest, I don’t think a single player would turn down an offer to play for coaches like Nick Saban, Les Miles, Steve Spurrier, Mark Rict, Will Muschamp, etc… because they have the mentality to mold high school players into college players and prepare them for the NFL. College football and the NFL are two different things. The speed is faster, the hits are harder. The intensity is greater and the fans base is larger.

With this being noted, the SEC gets players more prepared for the next level than other conferences because the defenses are both more aggressive and sophisticated. Most teams in the NFL are moving toward the 3-4 base defense.  For the SEC, the Alabama Crimson Tide has won three National Championships using the 3-4 defensive set. As far as sophistication goes, defensive coordinators in the NFL love to have different blitz packages to create pressure. Some use linebackers to set up delayed or stunt blitzes, while others used defensive backs to create pressure. Coaches also use defensive backs in different coverage schemes. Some use bump and run coverage and other have safeties over the top. The NFL teams that are still using the 4-3 defensive set rely on the defensive line to create penetration up front and cause havoc for the offensive line. In the SEC, the LSU Tigers run the 4-3 defensive set under defensive coordinator John Chavos. LSU is known for having big, athletic defensive lineman that make life rough on an opposing teams quarterback.

I know what a lot of you are thinking right now, you are thinking why he is saying all of this before the main topic. I am saying this to create a platform and bring you in to the meat of this story, which is the 2013 NFL Draft and how Alabama did in it. We know that Nick Saban is an amazing coach, but more so than that he is a remarkable recruiter. Since his arrival in Tuscaloosa in April of 2007, Coach Saban has put 33 Crimson Tide players into the NFL Draft. In 2009-12, Alabama shipped great talent to the NFL under the leadership of Coach Saban. Some of those players who possessed the talent are as follows:

Though the players listed above did a phenomenal job at Alabama and are doing well in the NFL, Coach Saban saved his best recruiting performance thus far for this year’s draft class. For the first time since 1945 when the NFL Draft was 30 rounds, the Crimson Tide had nine players to get drafted (new modern-era record.) Some of these players were a part of the three national titles won by the Tide and they are as follows:

Having nine players selected in the 2013 NFL Draft not only gave Alabama the most its ever had since 1945 (10), but it tied them for second overall with LSU (9) and Florida (9). Georgia came in third respectfully with eight players in the draft and the lone school that made the ACC conference proud was Florida State as the Seminoles, behind Head Coach Jimbo Fisher, put 11 players in the draft. The SEC as a whole had 63 players to get drafted, which led all conferences. The ACC was second for all FBS schools, as they has 30 players to be selected and even the Non-FBS schools got some serious love from the NFL as they had 36 players to be selected. Though these statistics may seem insignificant to some, they speak a powerful message to others. The message is that NFL scouts, owners, general managers, and coaches all want players who have the desire to win instilled in them. The conference that has gotten the job done from that standpoint is the SEC, specifically Alabama. I honestly believe that as long as Nick Saban remains head coach, the recruiting is only going to get better and better. As far as continuing to win championships and placing players in the NFL Draft goes, I still feel that as long as Nick Saban is head coach of the Tide, you can never count them out of the conversation. 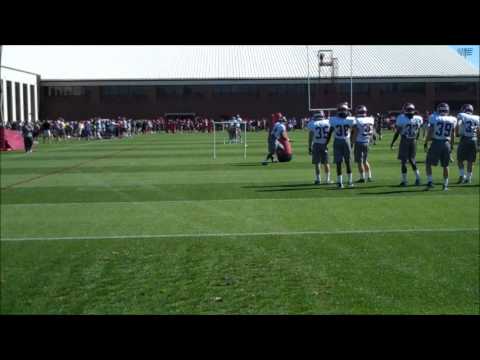