It is one thing to have all the statistics and accolades that college football has to offer, but when you can display the toughness to continuously play on the gridiron despite a series of painful injuries, you have officially entered into a class of your own.

For the Alabama Crimson Tide, many people believe that the heartbeat of this team is AJ McCarron. Though he is the leader of the offense, the heartbeat of the Tide lies within 5-foot-9, 187 pound sophomore running back, Demetrius “Dee” Hart.

As a native of Orlando, Fla., Hart attended and play football for Dr. Phillips High School.  He became known there as a talented runner and a gifted receiver. As a junior, he had 104 carries for 827 yards and 12 touchdowns while catching 20 passes for 236 yards and three touchdowns.  In his senior year, Hart became a household name as he set 23 school records including most 100-yard rushing games (18), 200-yard rushing games (four), points scored (518), total touchdowns (88) and all-purpose yards (7,405).

Despite the stiff competition at the running back position, Hart turned down offers to play for Michigan, Auburn, Arkansas, Florida State and Georgia in 2011 as he decided on coming to title town and play for the Crimson Tide.

Hart enrolled at Alabama in January of 2011and participated in spring drills. In 2009-10, Alabama had a talented trio of running backs. Mark Ingram, Trent Richardson and Eddie Lacy did more than just give opposing defenses nightmares, they took a lot of pressure off the quarterback in their ability to gain yards after contact. The Crimson Tide had the luxury of rotating backs to keep fresh legs on the field, which aggravated defenses. When the Saints drafted Ingram in 2011, it seemed as if Hart would get his opportunity to join forces with Richardson and Lacy and keep the trio going.

After practicing well in the spring and most of the summer, Hart tore his ACL toward the end of summer camp. He watched as Richardson and Lacy led Alabama to a national title while his moment slipped away on the sidelines in 2011. Tearing an ACL would cause most people to not even think about playing sports, let alone football.  For Hart, all he wanted was to see the field again and he was going to do everything possible to get back there.

In the offseason, Hart had surgery on his knee and rehabbed his way back. Though Richardson was drafted by the Cleveland Browns in 2011, Eddie Lacy was still with the Tide. With Lacy, TJ Yeldon (then freshman) and a healthy Hart, Alabama had its talented trio again and was poised to do some damage on the ground.

In 2012, Hart was back on the gridiron running the ball and playing on special teams. He recorded 21 carries for 88 yards, caught two passes for 18 yards and returned four punts for 50 yards. Just when he was getting back into the swing of things football wise, Hart tore his ACL again. He lasted just five games in 2012 regular season and once again watched as Lacy and Yeldon led the Crimson Tide to a national title while his dream vanished away on the sidelines.

The difference between Hart and most athletes is having the mentality to get back up after you have been knocked down countless times. Hart has torn his ACL twice and instead of throwing in the towel and complaining, he had surgery on his knee and has rehabbed his way back again.

With his speed and knowledge of the system, coach Saban decided to move Hart to the defensive side of the ball as a cornerback. During this offseason, he embraced the position change. Hart became acquainted with the “star” position in Saban’s nickel and dime defense. Though he enjoyed learning and operating in a new position, Hart’s goal coming into college was to play running back and he wanted to prove that he could remain healthy and do it.

One thing about Nick Saban, outside of the fact that he loves winning, is he loves players that have toughness. In reference to Hart, Coach Saban said “For his size, pound for pound, I don’t know if there’s a tougher guy on our team. “I respect great competitors. I love competitors. That guy’s a great competitor in my mind no matter how much plays, wherever he plays. That’s how he competes.”

This season, Hart will be back at the running back position and playing on special teams. He intends to stay healthy and make sure that nothing stops him from completing a season with the Crimson Tide. 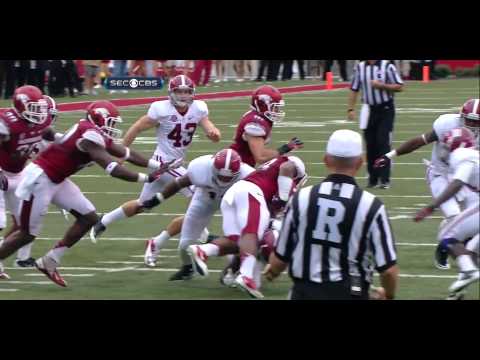