Special Teams [A+] – It was in the 2012 BCS title game that former Crimson Tide placekicker Jeremy Shelley had his poetic justice moment, connecting on five of seven field goals against LSU. This season against Ole Miss, it was Cade Foster’s time to shine. Though Alabama’s offense couldn’t cash in on drives with touchdowns, give Foster credit for stepping up to the plate and putting points on the board.  He connected on three field goals in the game, including a 53-yard field goal in the first half.  Special teams’ is all about controlling field position. Punter Cody Mandell demonstrated it well against Mississippi. He had five punts for 231 yards (46.2 yards per punt) and pinned the Rebels inside the 20-yard line three times.

Offensive Line [A] – After struggling with Colorado State, Alabama’s offensive line was able to establish itself and move the ball on the ground against the Rebels. They did a fine job of putting a man on a man and moving Mississippi off the ball to create lanes for the backs. After the dismal 66 total yards rushing against the Rams, the Crimson Tide bounced back with 254 total yards on the ground against Ole Miss. The offensive line did a nice job pass blocking as they only gave up one sack to the Rebels defense. Against Colorado State, the Tide amassed 338 yards of total offense. Against Mississippi, Alabama totaled 435 yards of offense. The Crimson Tide achieved 21 first downs against the Rebels as opposed to 16 against the Rams.

Defense [A+] – Against Ole Miss, fans saw the Alabama defense that they have grown to know and love. They played with a lot of fight, heart, grit and passion against the Rebels. After holding Colorado State to just 51 yards rushing, the Tide’s defense held Mississippi to 46 yards rushing. Coming into the game, Ole Miss running back Jeff Scott was seventh in the SEC in rushing (35 carries for 330 yards and two touchdowns), averaging 9.4 yards per carry. Against the Crimson Tide defense, Scott was stuffed for just 28 yards rushing (3.5 yards per carry). Alabama did a great job pressuring Bo Wallace. They sacked him twice, forced two turnovers and a safety from the Rebels. Most importantly, the Crimson Tide surrendered nothing on the scoreboard and only gave up 205 total yards to Ole Miss.

Running Game [A+] – While all the hype in this game was surrounding Scott, all the production in the game went to TJ Yeldon. Though he struggled to find running room against Colorado State, he found daylight against Mississippi. He used his vision well, hit the holes the hard and provided the Alabama offense with its first touchdown of the game via a 68-yard run to pay dirt. As far as statistics go, Yeldon went over the century mark in rushing. He had 17 carries for 121 yards (7.1 yards per carry) and a touchdown. Kenyan Drake, not to be outdone, had an outstanding performance on the ground as well. He racked up 12 carries for 99 yards (8.3 yards per carry) and a touchdown. Both backs ran well and neither of them turned the ball over.

As for AJ McCarron, his completion percentage was efficient (78.1 percent of passes completed), but with the Tide’s ability to move the ball on ground in this matchup, he didn’t have to do much. He was 25-32 passing for 180 yards, zero touchdowns and one interception. Though his favorite targets (Amari Cooper & Kevin Norwood) were a little banged up coming into the game, it still doesn’t give McCarron a right to force the ball. He only had three interceptions last season, so far this season he has three interceptions. He must remember to make wise decision with the football, keep the ball in his team’s possession and play the next down.

One thing that was impressive in the game for Alabama was they converted on third down a lot more. Against Colorado State, they were 2-10 (20 percent) on third down. Against Mississippi, the Crimson Tide offense was able to stay on the field, converting 47 percent on third down. They must continue to improve on this aspect as they move deeper into the SEC schedule.

For the Mississippi Rebels, the dream of starting a season 4-0 will have to wait another year. It was a valiant effort, but the Alabama defense was just too much for them to handle. They are a talented, but very young football team that needs to continue to grow and develop. They came in under a lot of hype and anticipation, but in order to succeed you must bring your A game. Ole Miss did not have it against Alabama.

For the Crimson Tide, they fulfilled the 17.5 point spread by defeating Mississippi 25-0. They established themselves defensively as a force to be reckon with and the offensive line showed up to play ball against Ole Miss. 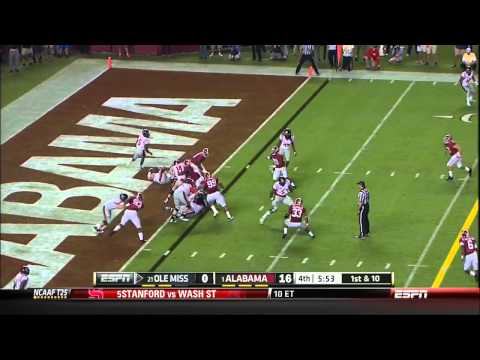