It doesn’t matter if it’s on the defensive line, linebacker core or in the secondary, every defense desires to have one player they can depend on to get everyone else focused on the game. As a leader on defense, a player must possess three qualities: instinct, passion and experience. Having an experienced player on defense provides the team with a second coach or defensive coordinator on the field.

In recent seasons, the leaders on the Alabama Crimson Tide have come from the linebacker position. From DeMeco Ryans and Rolando McClain to Dont’a Hightower and Courtney Upshaw, Alabama’s strength defensively has come from second level (linebackers). In the past two seasons, the Crimson Tide’s leader on defense has been CJ Mosley. In his four years with Alabama, Mosley has been spectacular.

The journey to greatness for Mosley began as a freshman in 2010. He played in all 13 games and finished third on the team in tackles with 67. Though his breakout game came against LSU (nine tackles), he put together great performances against Mississippi (five tackles), San Jose State (seven tackles and three deflections), Mississippi State (12 tackles) and South Carolina (five tackles). Along with 67 tackles, Mosley registered his first touchdown on defense against Florida off an interception. With his contributions, Mosley helped the Tide achieve a 10-3 record, a 49-7 victory against Michigan State in the Capital One Bowl and become the No.1 defense in the Southeastern Conference, surrendering 14.1 points per game.

In his sophomore season, Mosley shared the weak side linebacker (will) position with Nico Johnson. Despite missing two games because of a dislocated elbow, Mosley still played in 11 games and started in six of them. Though his numbers dwindled from his freshman season, Mosley was still productive. He totaled 37 tackles (4.5 tackles for loss), two sacks, two pass breakups and an interception. His best games stat wise came against Tennessee (eight tackles), Auburn (six tackles) and LSU (interception).

In 2011, Mosley helped Alabama become the No. 1 defense in the SEC and the nation. The Tide gave up just 74.9 yards rushing per game and allowed three rushing touchdowns for the entire season. With Mosley, the Crimson Tide was first in the SEC in pass defense. Opposing quarterbacks completed just 48.3 percent of their passes. Alabama allowed nine touchdowns and forced 13 interceptions. To cap off a successful sophomore campaign, Mosley helped the Tide capture its 14th national title defeating LSU in the 2012 BCS National Championship Game 21-0.

In 2012, Mosley went from being contributor to the undisputed leader of Alabama’s defense. He played in all 14 games (10 starts) and his stats improved dramatically from the previous season. At weak side linebacker, Mosley led the team with 99 tackles (7.0 tackles for loss).  He was ninth in the SEC in tackles per game with 7.62. Mosley recorded for sacks, two pass breakups, one forced fumble, three quarterback hurries and two interceptions (one for a touchdown against Michigan).

Mosley’s junior year was the definition of greatness for linebacker standards. He not only helped the Tide maintain its stinginess on defense, giving up 10.7 points per game, but he also helped Alabama stuff the opponents run game. In 2012, opposing teams averaged just 79.8 yards rushing against the Crimson Tide. As far as the aerial attack goes, Alabama forced 19 interceptions with Mosley.

Though Alabama will not play for a national title this season, Mosley still remained the dominant nucleus of the defense. He has started and played in 11 games this season. Currently, he leads the team in tackles with 88 (9.0 tackles for loss).  This season, Alabama is first in the nation in points allowed, giving up 9.3 points per game. The Crimson Tide has surrendered 91.3 yards rushing per game and five rushing scores this season. Opposing quarterbacks have tossed just seven touchdowns this season, while Alabama’s defense has forced 10 interceptions.

Alabama will take on Oklahoma in the BCS All State Sugar Bowl on January 2, 2014. The main thing that’s on the mind of the Crimson Tide and its fan base is sending Mosley off on a good note. With all the talent the Tide has had on the defensive side of the ball in recent years, Mosley will go down in history as one of the best that has ever donned a crimson and white uniform.

The one thing that jumps out at a lot of analysts about Mosley is his size. Despite him being just 6-foot-2, 238 pounds, Mosley has tremendous lateral quickness. He has great speed which allows him to navigate from sideline to sideline. Though Mosley isn’t a premiere pass rusher, he excels in stopping the run and playing the passing lanes well.

Mosley is a gifted player and has the accolades to prove it. He is a two-time national champion, an SEC champion, the SEC Co-Defensive Player of the Year (2013) and a Butkus Award winner (2013).With Mosley graduating and possibly entering the 2014 NFL Draft, the question now is who will be his successor?

Junior linebacker Trey DePriest has played with Mosley for three seasons. He made himself known as a freshman in 2011 as being a hard hitter. DePriest totaled 25 tackles as a freshman and was second on the team in tackles as a sophomore with 56. At 6-foot-2, 245 pounds, DePriest’s true position is at middle (mike) linebacker.

He is more than just a hard hitter, he also stuffs the run and can generate a pass rush if need be. DePriest was third on the team in tackles this season with 47. He also totaled a sack, an interception, two fumble recoveries and a forced fumble.

Adrian Hubbard and Denzel Devall were tied for ninth on the team in tackles with 25. Devall had three sacks this season, while Hubbard produced two. Though Hubbard took a step back this season (six sacks last season), he was recruited to be a premier pass rusher for the Alabama defense. With Hubbard and Devall returning next season, both will be looked upon for leadership and production.

In the absence of Vinnie Sunseri, Landon Collins stepping into the lights and proved to the world that he is a gamer. Last season, Collins showed that he was a beast on special teams. This season, he proved that he can handle both special teams and being a defensive back. Collins was second on the team in tackles this season with 51. He recorded six pass breakups, two quarterback hurries, one fumble recovery and a force fumble. Against Tennessee, Collins intercepted a Justin Worley  pass and took it 89 yards for a touchdown.

Before tearing his ACL against Arkansas, Sunseri was the captain of the Tide’s secondary. He amassed 20 tackles and intercepted two passes for touchdowns before his injury. In battling off-the-field issues, Ha Ha Clinton-Dix put in a productive season. He was fourth on the team in tackles with 45. He had two interceptions and four pass breakups.

With a healthy Sunseri returning next season and if Clinton-Dix decides to return for his senior year, one of these guys can truly be the leader of Alabama’s defense. As Collins, Geno Smith and others continue to grow and mature, the Tide’s defense that looked suspected this season will be a definite strength next season. 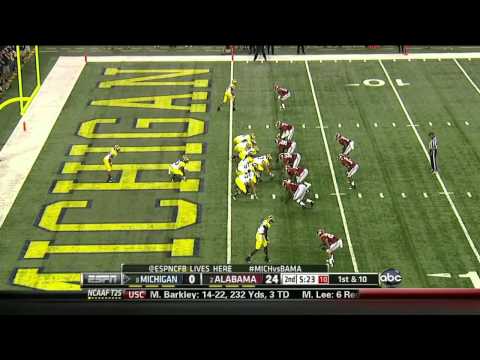