Many bonds form in the world of sports. From pitchers and catchers (baseball) to coaches and players, in every aspect of the game you see people form special relationships. In college football, there are numerous relationships, but one of the more dominant ones happens to be between a quarterback and his receiver.  This relationship is important because when a quarterback has that one receiver who is reliable, dependable and capable of making plays, it makes his job that much easier to get him the football.

For the Alabama Crimson Tide, it’s had a lot of talented receivers in its history.  From Keith Brown, DJ Hall and Tyrone Prothro to Marquis Maze and Julio Jones, Alabama quarterbacks have never had a problem with finding their go to receiver. In the three seasons that AJ McCarron was the starting quarterback; his main target was Kevin Norwood.

Though Norwood caught three passes for 56 yards (18.7 yards per catch) and a touchdown in 2010 as a redshirt freshman, his breakout season came in 2011. As a sophomore, Norwood became a regular in the wide receiver rotation for Alabama. He finished the 2011 season with 11 receptions for 190 yards. Despite having little production in the regular season, Norwood’s star shined brightest on the biggest stage in college football. He made himself known to the world as a dependable target in the 2012 BCS National Championship Game against LSU.

In the matchup with the Tigers secondary, Norwood aggravated them. He had four receptions for 78 yards. All four of his receptions were huge third down conversions. Norwood’s performance helped the Tide achieve its 14th national title.

In his junior season, Norwood’s role on the team increased. He was looked at as a go to target more. With this being said, Norwood had a monster season. He finished his 2012 campaign posting 29 receptions for 461 yards (15.9 yards per catch) and four touchdowns. To prove that Norwood’s dependability on third down was accurate, 24 of his 29 receptions (82.8 percent) were third down conversions to move the chains.

He totaled five receptions for 62 yards against the Tigers secondary. Of the five receptions, three of them came on the critical final drive for Alabama. Norwood was targeted four times on the drive. Three out of four times, he came through for the Tide with a catch. It was Norwood that helped set up the game-winning 28-yard screen pass from McCarron to Yeldon to secure Alabama’s national title hopes.

While Amari Cooper and Kenny Bell struggled early in the season this year, Norwood remained consistent.  Currently, he has 36 receptions for 538 yards (14.9 yards per catch) and seven touchdowns. Despite having just one 100-yard receiving performance (Tennessee: 6 receptions for 112 yards and a touchdown), Norwood had seven games in which he caught at least one touchdown (Texas A&M, Kentucky, Tennessee, LSU, Mississippi State, Chattanooga and Auburn).

Norwood helped McCarron and the Tide achieve back-to-back national titles and a Southeastern Conference title. For his career, Norwood amassed 79 receptions for 1,245 yards and 12 touchdowns. The thing that will impress NFL scouts about Norwood is his ability to create separation and move the chains on third down. For his size at 6-foot-2, 195 pounds, Norwood is a physical receiver who can make the catch in traffic and can also beat you deep downfield.

With Norwood graduating and potentially trying the NFL, Alabama will have to depend on a new receiver to step up and fill his shoes. The Crimson Tide will have a seven man quarterback battle going into summer camp and spring ball. Though the Tide has a ton of talent at the receiver position, whoever wins the quarterback battle is going to need a receiver that he can depend on each game to come up with clutch receptions.

Last season, Cooper was the explosive, big play receiver. He came out of nowhere as a freshman in 2012. While everyone was high on Chris Black, Cooper became the guy that wowed everyone. He finished his freshman campaign with 59 receptions for 1,000 yards (16.9 yards per catch) and 11 touchdowns.

Cooper’s numbers dropped a bit this season because of a toe injury, but he came on strong in the latter part of the season. He totaled 36 receptions for 615 yards (17.1 yards per catch) and four touchdowns. At 6-foot-1, 202 pounds, Cooper is a deep ball threat. He has tremendous speed and can run great routes. With him returning healthy next season, Alabama’s offense can still be successful.

If you didn’t know Christion Jones as a versatile weapon last season, you received a full dose of it this season. Jones can be used anywhere in the Tide’s offense from running back and wide receiver to return specialist. Last season, Jones totaled 27 receptions for 368 yards (13.6 yards per catch) and four touchdowns. On special teams, Jones amassed 29 returns for 426 yards and a touchdown.

This season, Jones had 36 receptions for 349 yards (9.7 yards per carry) and two touchdowns as a receiver. On special teams, Jones had 39 returns for 830 yards and three touchdowns. The special thing about Jones is his speed and ability to get to the perimeter. He may be asked to play more in the slot next season.

Like Cooper, DeAndrew White is a deep ball receiver. Last season could have been his breakout season, but a torn ACL against Mississippi prevented that from happening. Before the injury, White had eight receptions for 105 yards (13.1 yards per catch) and two touchdowns. He returned this season healthy and caught 29 passes for 395 yards (13.6 yards per catch) and three touchdowns. White is a very smooth route runner and though he’s not a speed demon, he is deceptively fast.

OJ Howard and Chris Black showed the Crimson Tide coaching that they were nothing to sneeze at this season. In replacing Michael Williams, Howard had 14 receptions for 269 yards (19.2 yards per catch) and two touchdowns. Despite his height at 6-foot-6, 247 pounds, Howard can run and he demonstrated his speed against LSU this season. Black totaled eight receptions for 79 yards and two touchdowns. Like Jones, Black is versatile. He can play slot receiver or you can flank him beside the quarterback and let him run the ball.

Then you have the running backs TJ Yeldon, Kenyan Drake and Jalston Fowler. All three of these guys have great hands and can catch the ball out of the backfield. They also have tremendous speed and can burn a defense on screen plays. Last season, Yeldon had 11 receptions for 131 yards (11.9 yards per catch) and a touchdown. This season, he amassed 18 receptions for 160 yards. Drake had 12 receptions for 135 yards (11.3 yards per carry) and a touchdown this season. Fowler was money in the redzone this season. All five of his touchdowns came inside the redzone.

Along with these guys, the Tide also has Cameron Sims, Raheem Falkins, Robert Foster and more. With a lot of talent on this team to go around, the question will be who will step up and help the future Alabama quarterback? 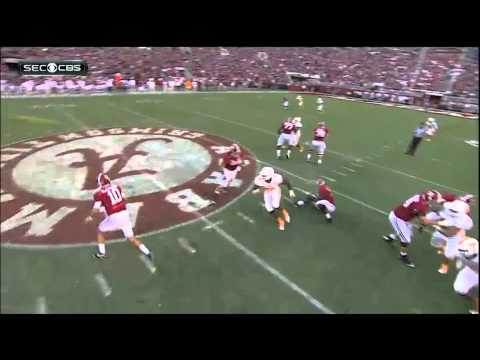