AJ McCarron [A] – Despite his overall numbers being slightly better in 2012, McCarron’s overall leadership was pivotal in Alabama’s success this season. With Amari Cooper battling a toe injury, Kenny Bell going through personal issues (early in the season), having a very young offensive line and tons of off-the-field issues, McCarron truly stepped up and kept everyone focused on the task at hand.

As far as mechanics go, McCarron’s deep ball improved tremendously from his first year starting to this season. Though his back shoulder throws seemed effortless, he excelled in the aspect of ball placement.  In many situations this season, McCarron did a great job of placing the ball in the right spot so only his man could make the reception. When it came down to making good reads and checking progressions, McCarron was sharp for the most part.

One aspect that McCarron really impressed a lot of people in this season was his ability to drive the ball down field. In the Auburn game, Alabama was backed up inside the 5-yard line twice. Though McCarron took the team down the field on both possessions, he tossed a 99-yard bomb to Cooper for a touchdown on the second one.

Nick Saban even trusted McCarron enough to call his own play. In the matchup against Texas A&M, he audibles to a pass play in the redzone and finds Jalston Fowler for a touchdown. The Crimson Tide went on to win that game 49-42 in a shootout with the Aggies. McCarron had four touchdown passes in that meeting.

Even in the loss to Auburn, McCarron played inspired football. He passed for 277 yards with three touchdowns. For this season, McCarron’s statistics were good. He completed 67.3 percent of his passes for 3,063 yards with 28 touchdowns and seven interceptions.

Receivers [B] – Is it important to start well? Yes, but in football we know the ole saying “It’s not how you start, but how you finish.” Alabama’s receiving core came out of the gates slow to start the season, but McCarron needed a clutch reception the receiving core came through. Despite having a monster freshman year (59 receptions for 1,000 yards and 11 touchdowns), Amari Cooper’s stats dwindled to just 45 receptions for 736 yards and four touchdowns this season.

Though the toe injury took away some of his speed and explosive play making ability, give opposing defenses credit for really keying in on him this season. With defenses eyeing Cooper, Kevin Norwood became the star attraction. The title “Mr. Reliable” fits Norwood well. Norwood has made some incredible plays in his tenure at Alabama, but this season he really stepped up and became McCarron’s right hand man.

Norwood averaged one touchdown reception against six tough SEC opponents (Texas A&M, Auburn, Mississippi State, LSU, Tennessee and Kentucky) and one game in which he had over 100 yards receiving (Tennessee-112 yards). For the season, Norwood was outstanding. He totaled 38 receptions for 568 yards and seven touchdowns.

Running Game [B] – Despite Alabama’s running backs having a successful season running the ball, coach Burton Burns will need to work with his guys more on ball security. Between TJ Yeldon and Kenyan Drake, Alabama had seven lost fumbles (five in the redzone). In order for a team to be successful, they can’t turn the ball over. Turnovers at critical points in games hurt the Tide this season.

Though the numbers Yeldon and Drake put up may impress some people, but the real surprise this season for Alabama was the emergence of Derrick Henry. With his size at 6-foot-3, 238 pounds, Henry brings the power back factor to the Tide. He’s a hard –nosed runner who doesn’t mind shedding tacklers, but he also has the speed to go along with it. Henry had 36 carries this season for 382 yards (10.2 yards per carry) and four total touchdowns.

Did the O-Line improve much after the Virginia Tech game? They certainly did, but this is where the soft strength of schedule really hurt Alabama. When you play against teams that don’t have as much talent as you do, you don’t have to work as hard. In the matchups against Colorado State, Georgia State and Chattanooga, people could clearly see the talent advantage that Alabama had over these three opponents.

Though the Rams put up a bit of a fight, against Colorado State, Georgia State and Chattanooga, the Crimson Tide’s offensive line would just bully them off the ball with ease. When you watch tape of Alabama’s offense against Virginia Tech, Auburn, LSU, Mississippi State and Oklahoma, you can clearly see the struggles they had with athletic defenses.

With this being said, the Tide gave up seven sacks against Oklahoma. Coming into the matchup, they only surrendered 11 sacks all season.  The offensive line committed a lot of penalties and missed some blocking assignments this season. This came from lack of focus and having good defenses intimidate them.

On a positive note, the line did help Alabama achieve 38.2 points per game this season. With the help the offensive line, the Tide totaled 400+yards of offense against nine teams (six SEC teams) this season.

Defense [B] – If there is one player that this defense will miss the most next season it’s CJ Mosley. Not only is he a leader, but he plays with so much heart, grit, passion and instinct. He led the team in tackles this season and once again helped Alabama’s defensive become a top five defense.

The Crimson Tide forced three shutouts this season (Mississippi, Arkansas and Chattanooga) and did a decent job stopping the run for the most part. Landon Collins grew this season as a defensive back. We saw his ability to tackle well in space and play the ball in the air very well. Collins stepped up big time in the absence of Vinnie Sunseri and really proved that he’s a gamer.

When Sunseri was healthy, he was far and away the captain of the secondary. He was another coach on the field and made sure that the defense was prepared. Like Collins, Sunseri huge in the aspect of playing the ball well and making timely interceptions. Before and after his suspension, Ha Ha Clinton-Dix was the other leader in the secondary. He was not only a hard hitter, but he played both the pass and the run well.

Along Mosley, Trey DePriest had a fine season at middle linebacker. He made some plays in the run game and did a nice job of making sure he hit his gap and made the play. The surprise this season for Alabama was A’Shawn Robinson. As a freshman, he brought the pass rush back to the Tide. Robinson led the team in sacks with 5.5 and was seventh on the team in tackles.

The one thing that Alabama’s defense must improve on in the future is how to contain dual threat quarterbacks and up-tempo offenses. Against Texas A&M, Auburn and Oklahoma, the Tide struggle with negating the perimeter and getting its personnel in line for the play. 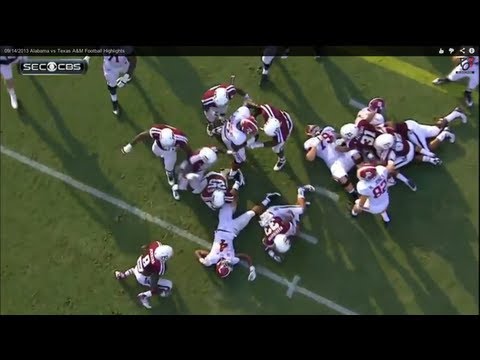