Though it’s hard to make the jump from high school to college ball, it’s even harder to transition from college ball to professional play. As far as the NFL is concerned, players get paid, but the theme in the league is different. Owners and general managers crave production in the NFL. In this profession, quarterbacks have the daunting task of being the face of a franchise and making sure that the team competes well every season. The goal in mind for all NFL quarterbacks is to take their team to the playoffs and potentially win a Super Bowl.

For the Alabama Crimson Tide, it’s had its share of quarterbacks that did well in college and excelled at the next level. Bart Starr (Packers), Joe Namath (Jets) and Kenneth Stabler (Raiders) were three of the best quarterbacks to come through the Capstone. Not only were they winners at Alabama, but they achieved immortality by being Super Bowl champions in the NFL. It’s been a while since Alabama has had a quarterback that achieved greatness in both fields. Crimson Tide fans believe that AJ McCarron can be the next great NFL quarterback from Alabama.

McCarron’s path to greatness started at St. Paul’s Episcopal High School (Mobile, Ala.), but his talents didn’t really take center stage until his sophomore season. In 2011, McCarron got the taste of what it truly feels like to be an Alabama quarterback. After winning the starting job away from Phillip Sims, McCarron started all 13 games and really showed a lot of confidence, determination and poise.

In his first season starting, McCarron completed 66.8 percent of his passes for 2,634 yards with 16 touchdowns and five interceptions. Though his stats were nice, what really brought people to like McCarron was his leadership. Before he became the starting quarterback, McCarron had to learn how to be an effective leader. It was through the guidance of Nick Saban and teammates that taught him how to earn the respect of the people around him.

McCarron guided the Tide to an 11-1 season in 2011 and set them up with a rematch against LSU in the 2012 BCS National Championship Game. Many of us know that defense wins championships, but if the offense can’t put up points there is nothing for the defense to hold on to. McCarron went 23-34 (67.6 percent of passes completed) passing for 234 yards and helped guide Alabama to a 21-0 victory over the Tigers for its 14th national title.

Like college, the NFL wants its players to avoid the “sophomore slump” at all costs. With this being mentioned, McCarron had a phenomenal junior season. In 2012, McCarron put on a show through the air. His passing yards (2,933), completion percentage (67.2 percent), touchdowns (30) and quarterback rating (175.3) were vast improvements from first season starting.

As a junior, McCarron developed trust with Saban, the coaching staff and his teammates. He was even looked at as a “dark horse” for the Heisman to most ESPN analysts. The one thing that coaches, general managers and owners love about quarterback is the ability to lead the team to a comeback victory. Peyton Manning, Tom Brady and Drew Brees are elite NFL quarterbacks in the aspect of not just winning Super Bowl rings, but having the ability to deliver a come from behind victory.

In his three seasons as the starting quarterback, McCarron has provided comeback wins for Alabama. He got his first opportunity to write his name in the Crimson Tide record books as a junior. In 2012, Alabama had to face LSU on the road with an undefeated season hanging in the balance. For the place coined by Les Miles as the venue where opponents’ dreams come to die, McCarron faced the ominous moon, Mike the Tiger and record attendance of 93,374 fans in Tiger Stadium “Death Valley.”

Despite it being his worst game statistically (51.8 percent of passes completed), McCarron showed in the final minute of the game what true composure and embracing the moment is all about. With 1:34 remaining in regulation and Alabama trailing LSU 17-14, McCarron led the Tide on a 5-play, 80-yard drive that will always be remembered as one of the greatest moments in history. The drive features three completions to Kevin Norwood and it was capped off on a beautiful 28-yard game-winning screen pass to TJ Yeldon. Alabama stuck the dagger in the heart of Mike the Tiger, Les Miles, LSU’s players and its fan base by winning 21-17.

If that comeback didn’t impress NFL scouts, then the stare down McCarron had with Johnny Manziel did. Another thing that NFL coaches love about quarterbacks is having the ability to defeat teams that once defeated you. Tom Brady has yet to know that joy because Eli Manning beat him twice. Peyton Manning barley knows that joy because he rarely ever defeats Tom Brady.

This season at Kyle Field (College Station), McCarron took on the folktale character known as Manziel. It was in 2012 that Manziel out played McCarron and the Tide’s defense in route to a 29-24 victory for Texas A&M over Alabama in Bryant-Denny Stadium. McCarron remembered that moment and purposed within himself that de’ja’vu would not occur again.

In the rematch at Kyle Field, the Aggies jump out to an early 14-0 lead. For the most part it seemed like the only thing that changed from the 2012 meeting and this season’s matchup was the venue. When a champion’s back is against the wall, he comes out fighting. McCarron put the team on his back and delivered a game for the ages. He went pound for pound with Manziel and out played him in College Station. McCarron passed for 334 yards and four touchdowns. He led the Tide to a 49-42 victory against Texas A&M.

One thing that is looked upon highly in the NFL is efficiency. It doesn’t matter if you are a mobile quarterback or a pocket passer as long as you don’t make mistakes, coaches will trust you with the football. In three seasons, McCarron has been the definition of efficient. Though the term “game manager” is toss around like a disease when his name is mentioned, let’s be reminded of the fact that you can’t be a productive quarterback at the next level if you don’t know how to manage situations.

Some of the best NFL quarterbacks right now are successful game managers. They do what their told and they don’t make mistakes. This season, McCarron completed 67.3 percent of his passes for 3,063 yards with 28 touchdowns and seven interceptions.

The main thing that all NFL franchises want is a winner. For McCarron, winning was the No.1 word in his vocabulary at the University of Alabama. As a starter, McCarron has posted a 36-4 record. He has done what no other Crimson Tide quarterback has done in the history of this program and that is passing for 9,019 yards in a career. For his career, McCarron passed for 9,019 yards with 77 touchdowns and 15 interceptions.

McCarron is a three-time national champion, a two-time SEC champion, the Johnny Unitas Golden Arm Award recipient (2013) and much more. People questioned McCarron’s mobility this season and wondered could he move well in the pocket and avoid the rush. In some situations this season, McCarron was able to pull the ball down and pick up yards with his legs.

McCarron will be able to transition into the next level well if he keeps in mind everything he’s learned from Saban. Going into the NFL combine, McCarron may have to work on his speed and footwork more, but as far as mechanics go with throwing the football and being accurate with it, he will transition well into the game. One thing McCarron will have to work on is anticipating the blitz and getting the ball out to his hot receiver quickly.

Many times this season, we either saw McCarron take the sack when the blitz came or threw the ball away. NFL speed is different than college speed and while defenders in college are aiming to mess up your game, NFL defenders are aiming to mess up your career. McCarron will need to work more on anticipating the blitz and developing a quick release with throwing the football. 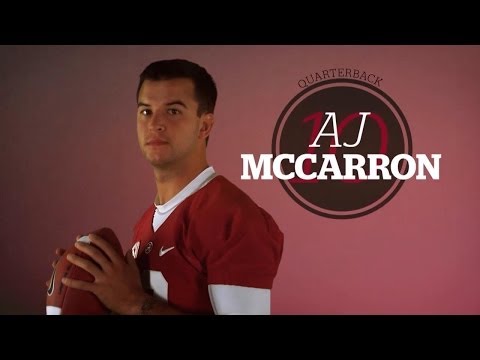