We are starting to see more running backs display the rare combination of power and speed in college football now than what we were accustomed to seeing. While they were known for their strength in the past, running backs are now recognized for speed, vision and the ability to set up blocks downfield.

At the University of Alabama, the running back position comes with a territory. Since his arrival to Tuscaloosa in 2007, Nick Saban has placed three running backs in the National Football League (Mark Ingram, Trent Richardson and Eddie Lacy). In recruiting ball carriers to Alabama, Saban looks for more than just size and speed. To play running back for the Crimson Tide, one must play with an edge to him.

After Shaun Alexander (1996-00), Alabama has gone with a two-back system. Though the trend started in 2008 with Ingram and Glenn Coffee, it really took off when Richardson and Lacy arrived at the Capstone. Despite the talent the Tide has at running back with TJ Yeldon and Kenyan Drake, it might be the 6’3” 238-pound star from Yulee, Florida that changes the game.

Derrick Henry is the definition of a man child. As a member of Yulee High School, Henry was a big play waiting to happen on every down. In his freshman season, he rushed for 2,465 yards and 26 touchdowns. Henry’s numbers increased his sophomore season, as he totaled 2,788 yards and 38 touchdowns. As a senior, Henry was unstoppable. He averaged 9.2 yards per carry and 327.8 yards per game.

Henry finished his high school career with 12,124 rushing yards and 153 touchdowns. He not only broke Ken Hall’s record, but he also racked up a bevy of awards in the process. Henry was ranked as the nation’s No.1 athlete in the ESPN 150.

He was listed as a five-star prospect by ESPN, 247 sports.com and Scout.com. Despite being offered scholarships to Georgia, Tennessee, Florida, Clemson, Miami, Notre Dame, Southern California and Florida State, Henry decided to take his talents to Alabama.

What surprised coach Saban and company about Henry was his patience. He took his time playing behind Yeldon and Drake, while anticipating for his chance to shine. Though he received playing time against Virginia Tech, Colorado State and Mississippi, Henry’s first productive performance came against Georgia State.

As his confidence began to soar, Henry patiently awaited his next moment on the field. Opportunity came for Henry late in the season against Chattanooga. He recorded his second rushing touchdown of his career against the Mocs. He finished the matchup with six carries for 66 yards (11.0 yards per carry) and a touchdown.

Regardless of the production against Georgia State, Chattanooga and Arkansas, Henry’s name emerged in the 2014 BCS Sugar Bowl against Oklahoma. Alongside DeAndrew White and Amari Cooper, Henry’s star shined bright inside the Mercedes-Benz Superdome.

As Yeldon struggled with ball security and Drake not seeing the field, Henry put on a virtuoso performance. He amassed eight carries for 100 yards (12.5 yards per carry) and a touchdown. Ironically, Henry’s shining moment didn’t come on the ground. With Alabama trailing Oklahoma 38-24 in the fourth quarter, Henry took a five-yard screen pass from AJ McCarron and turned it into a 61-yard burst to the endzone.

The score cut the Sooners lead to 38-31. Despite losing to Oklahoma 45-31, Alabama fans began to rejoice about the future and what can become of Henry. Against the Sooners defense, Henry was difficult to tackle. He ran with strength, toughness and displayed speed in the open field. In his ability to drag defenders downfield, it reminded many Tide fans of Ingram and Richardson.

Henry ended his freshman season with 36 carries for 382 yards and three touchdowns. Though he looks great in spring practice, Henry is focused on being the starting running back next season. According to Bleacher Report and Saturday Down South (SDS), Henry is listed among the top 10 running backs in the Southeastern Conference for 2014.

For most people, Todd Gurley will be looked at as the early Heisman favorite next season, but don’t count Henry out of the conversation. With 2014 possibly being the final year for Yeldon at Alabama, the Tide hopes he will secure the ball better next season and increase his chances of bringing the coveted bronze trophy back to Tuscaloosa.

Having Henry and Drake nipping on his heels has provided Yeldon with added motivation to not fumble the football. If ball security remains a lingering issue next season for Yeldon, Tide fans might see No.27 receive more carries out of the backfield. 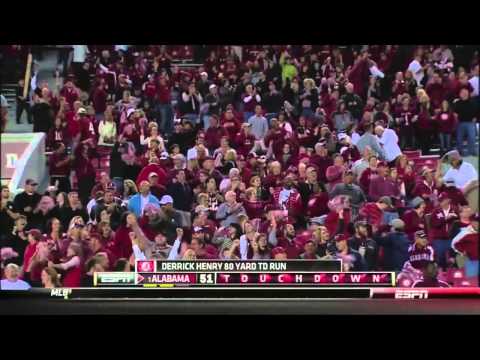