One thing players learn in college football is resiliency. Though it’s great to compete at full strength, there is something special about players who can play through the pain.

For Alabama, 2012 was supposed to be year for DeAndrew White. After a successful freshman campaign, White was poised for a breakout season as a sophomore. Despite a great start, White’s campaign came to halt against Mississippi with a season-ending ACL injury.

Before his name became relevant to Alabama fans, Amari Cooper was a 6’1” 202 pound receiver from Miami, Fla. As a member of Miami Northwestern High School, he was known as Teddy Bridgewater’s primary receiver. Cooper totaled 16 receptions for 175 yards and four touchdowns as a junior.  In his senior year, he had 33 receptions for 722 yards.

As White came off the field, Nick Saban turned to the bench and pondered over who should go in for him. Saban’s decision boiled down to two freshmen, Cooper and Chris Black. Black entered the Capstone with more hype, but Saban rolled the dice and went with Cooper.

Cooper embraced the moment when he stepped on the field and proved Saban made the right choice. He recorded eight receptions for 84 yards and two touchdowns. Cooper’s performance in that game parlayed into him having a phenomenal freshman season. The momentum from Mississippi game carried Copper into the matchup with Tennessee.

Though he emerged against Ole Miss, Cooper saved his finest performances for the SEC Championship Game and the 2013 BCS National Championship Game. Against Georgia, Cooper pulled in eight receptions for 128 yards, including a 45-yard touchdown reception that sealed the deal late in the game.

Cooper helped the Tide embarrass Notre Dame’s defense in the national game. Prior to the game, the Irish allowed 10.3 points per game. Alabama dropped 42 on the scoreboard and Cooper had six receptions for 105 yards and two touchdowns.

While most people dream of playing football as a freshman, Cooper broke records. He helped the Tide achieve an SEC title and a national title in 2012.  He finished 2012 with 59 receptions for 1,000 yards, 11 touchdowns and earned numerous honors.

Though Cooper desired to achieve the same success in 2013, he ended up having to battle through struggles early. With defenders guarding him closely and a toe injury hampering his speed, Cooper struggled to get going in the first three weeks of the season. In the middle of season against Kentucky, Arkansas and Tennessee, Tide fans noticed his health returning.

Regardless of the few decent performance Cooper put together, Alabama and its fan base saw what he did as a freshman and wondered when he would display that explosiveness again. The prayers were answered in the Iron Bowl. Against Auburn, Cooper was 100 percent healthy and put on a clinic. He had a season-best six receptions for 178 yards, including a 99-yard touchdown reception from AJ McCarron.

After the Iron Bowl, Cooper penciled in another great performance against Oklahoma. In the 2014 BCS All State Sugar Bowl, Cooper aggravated the Sooners secondary. He had nine receptions for 121 yards. Despite the struggles, Cooper finished his sophomore season totaling 45 receptions for 736 yards and four touchdowns.

Next season, Cooper will return to Alabama as a veteran receiver in an explosive group. He will be counted on to help the new quarterback under center settle in. With Lane Kiffin as the offensive coordinator, Cooper will be used in a variety of ways. Outside of the coaching staff, teammates and fans, Cooper can count on Bleacher Report for motivation. Bleacher Report, along with other sports news outlets, has Cooper in the top 10 list for receivers in 2014.

Thus far in spring practice, Cooper said Lane Kiffin has made Alabama’s offense player friendly. For Cooper, this is helpful because it will get him back to being aggressive as a receiver. What separates Cooper from other receivers is his ability to change speeds.

He has great hands and knows how to run precise routes. It’s not difficult for him to get on top of a defensive back and hit another gear. One thing coaches and players love is progress. The game came natural for Cooper as a freshman. Though he toughed it out as a sophomore, Cooper learned more about himself and Alabama’s system.  The question is can he really take the next step forward and be the game changer on offense? 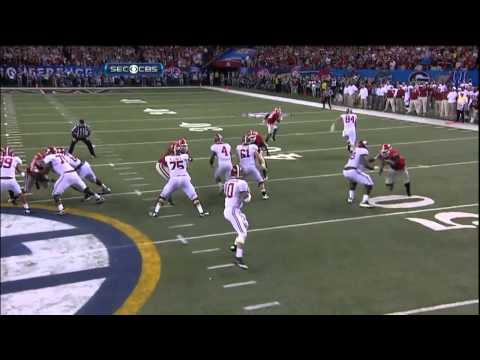