1992 was an interesting year for American citizens. William Jefferson “Bill” Clinton became the 42nd president of the United States, Nirvana brought grunge music to pop culture and gasoline was $1 a gallon.

Politics, transportation and music are important, but they don’t hold much value in the South.  Despite this, 1992 did unveil two thing people were happy about, Roy Kramer and Alabama football.

Before Kramer, college football was simple. Each division had nine teams.  Schools would play each other until the two best teams remained. These two teams would battle for ultimate supremacy in a national championship game.  The equation was the more you win, the better your chances were of getting to a title game.

Seeing teams fight for a shot at a national title is exciting; however, when a gamble is thrown into the mix, it opens up a can of controversy and uncertainty that’s also appealing.

Roy Kramer has worn many hats as a savvy businessman. His football debut came in 1967.  From 1967-1977, Kramer was the head coach for Central Michigan University. The Chippewas compiled a record of 83-32-2 under Kramer and won an NCAA Division II National Football Championship in 1974.

After Central Michigan, Kramer served as Vanderbilt’s athletic director from 1978-1990. Though he had a leadership role in the Southeastern Conference, Kramer’s big break didn’t come until 1990.

The SEC has been known for years as being the most dominant conference in college football. From its adoring fan base and decorative coaches to passionate players and championship hardware, the SEC prides itself on being the best.

When something has been defined as the best, it can be difficult to refine or make improvements.  This didn’t stop Kramer from taking a shot at trying to improve the best conference in football in 1990 when he took over as commissioner of the SEC.

Kramer’s vision for the SEC was for it to be the most watched conference in football.  In his quest to put the conference in front of the pack, Kramer steered the SEC into uncharted waters by proposing a conference championship game to the organization.

A conference had to have 12 schools for a title game to be installed.  On July 1, 1991, the SEC expanded, adding Arkansas and South Carolina to the conference. With two new schools added, Kramer continued to pitch his proposal for an SEC title game to the organization.

Change is difficult for everyone, but especially the SEC. Many coaches, including Steve Spurrier met the proposal with friction and negativity.  The coaches felt that adding a championship game would give the conference an excuse to beat itself up. College football analysts felt that it was a stupid idea because if a team lost the conference title game, it would jeopardize its chance at playing for a national title.

While the conference focused on the rough, Kramer consistently pushed the positive side of the proposal.  Revenue and fan base were the two aspects Kramer had on the forefront.

Since no other conference held a title game, Kramer felt if the SEC seized the opportunity it would generate more television contracts. In return, the title game would bring in more revenue to the conference, which would help out with expansions and broaden the fan base. The organization was still unsure about the idea, yet Kramer inked a deal with ABC to air the championship game.

Florida and Alabama separated themselves from the pack before the ’92 conference title game. Both programs were dominant; however, they contrasted in style of play. The Crimson Tide stuck to the old school. From Wallace Wade to Paul Bryant, Alabama was a tradition power run team with a ferocious defense.

In the 90s, people believed that only power run teams with a tough defense could win the SEC. Under head coach Steve Spurrier, the Gators were poised to combat that idea.

As an elder statesman of the SEC, Spurrier has grown to obtain little knowledge on defense, but his main prognosis is offense. Spurrier is quarterbacks coach and has been that way since his playing days at Ben Hill Griffin Stadium.

Spurrier was Florida’s quarterback from 1963-66. In his junior season, Spurrier passed for 4,848 yards and 37 touchdowns. He was awarded the Walter Camp Memorial Trophy and the Heisman Trophy. He had a prolific collegiate career and played 10 years in the National Football League, but Spurrier’s greatest success came as a head coach.

After being a quarterbacks coach at Florida and Georgia Tech, Spurrier became Duke’s offensive coordinator from 1980-82. In 1983, Spurrier became the youngest head coach (37 years old) in the United States Football League. He coached the Tampa Bay Bandits in the USFL and compiled a 35-21 record in three seasons.

In his return to college football, Spurrier became Duke’s head coach in 1987. He guided the Blue Devils to a bowl game and a share of the Atlantic Coast Conference title in 1989. Spurrier was named ACC Coach of the Year in 1988 and 1989.

Alabama and Florida faced off on the gridiron in 1991. Under head coach Gene Stallings, the Tide had a dominant defense led by defensive ends John Copeland and Eric Curry. Alabama’s defense was first in the nation in points allowed, surrendering 10.7 points per game.

Spurrier and the Gators put on its full aerial attack against Alabama. With Shane Matthews under center, Florida scored 35 points and shutout the Tide 35-0.

After Kramer notched the television contract in 1991, the SEC title game was put in play. As the 1992 season rolled in, Florida was favored to win the conference. Alabama’s defense tore through the SEC West. The Crimson Tide allowed 8.0 points per game.

Alabama finished the 1992 regular season undefeated at 11-0. Normally, the Tide would have played No.1 Miami for the national title. After the conference title game was passed, Alabama had to face Florida.

Florida finished the regular season at 8-3.  Despite the losses, the Gators managed to win the SEC East crown.  Most fans pinned Alabama as the favorite in the rematch. Spurrier embraced the underdog role.

Part one of Kramer’s gamble was complete as Legion Field (Birmingham, Ala.) was packed out to see the first inaugural SEC Championship Game. Not only did ABC Sports air the game, but the conference game was the only sporting event televised.

Before the game, Alabama’s defense allowed 126 passing yards per game. Against Florida, Shane Matthews passed for 287 yards.  Gators running back Errict Rhett scored the first touchdown of the game off a 5-yard run. The Crimson Tide responded with solid play on defense and 21 unanswered points.

In the regular season, Alabama was unbeatable when it had a huge lead late in games. Florida found itself down 21-7 with 1:21 remaining in the third quarter. The Gators scored 14 unanswered points and tied the game at 21.

What was once an insurmountable lead; turned into a scare for Alabama fans, college football and Roy Kramer. As pressure rose from his gamble, Kramer hid himself from the crowd in the event of Alabama losing the game and its shot at immortality.

With the score tied at 21 in the fourth quarter, Kramer’s gamble and Alabama football would collide in creating the biggest landscape change in college football history.

Along with shovel passes to Rhett, Florida ran hi-lo routes against Alabama secondary all game. With 3:25 remaining in regulation, Crimson Tide defensive back Antonio Langham decided enough was enough.

Before the matchup against Florida, Langham intercepted Auburn’s quarterback Stan White. Langham returned the interception for a 61-yard touchdown. The score sparked the Tide’s 17-0 victory over the Tigers.

Spurrier called a hi-low play for Matthews to run. Instead of going through progressions, Matthews locks in on his primary target. He telegraphs his pass and Langham jumped the route. Langham intercepted the pass and went 28 yards for a touchdown.

As the smoke cleared, Langham celebrated, Matthews was disgusted, Alabama fans rejoiced and Kramer’s gamble paid off. The Crimson Tide won 28-21 and punched its ticket to the national title game. Alabama defeated Miami 34-13 to win its first national title since Paul Bryant.

The first inaugural SEC title game had 83,091 fans in attendance. In his tenure as commissioner, Kramer oversaw the distribution of a then-league record $95.7 million to its member institutions for 2001–02.

Kramer’s gamble and Langham’s interception did more than just rack in funds, it paved the way for other conference to adopt a conference title game. Since 1992, seven conferences have a conference championship game (ACC, Big Ten, Pac-12, C-USA, Mountain West and Mid-American).

Yes. The SEC is the most dominant conference in football, but would it have been that way if Kramer didn’t make the proposal. Kramer was more than a businessman; he was a pioneer who saw the conference thrive ahead of its time. 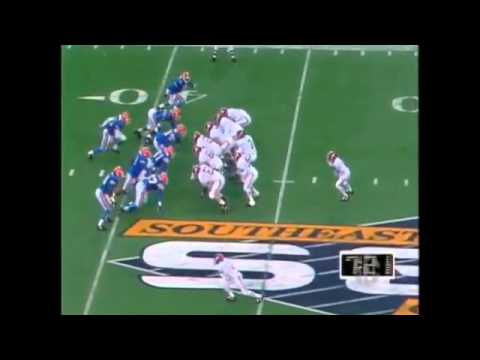