Alabama had eight players selected in the 2014 NFL Draft. Aside from quarterback and special teams, Alabama returns its core group of players on both sides of the ball next season.

While the Crimson Tide’s mission remains the same, it’s never too early to begin the conversation of which players could be first round picks in the 2015 NFL Draft.  Collegiate success is good, but the goal of each athlete is to make it to the professional level and transition well.

Summary: DePriest is a hard-hitting linebacker that excels at stopping the run.  Despite his size, DePriest is a versatile player. He can cover the passing lanes as an outside linebacker, generate pressure on opposing quarterbacks and stop the run as a middle linebacker or wreak havoc as a defensive lineman.  In 2013, DePriest finished third on the team in tackles with 65. He recorded seven tackles for loss, two sacks, an interception, a pass breakup, two forced fumbles and two fumble recoveries. With CJ Mosley and Adrian Hubbard in the National Football League, it’s DePriest’s turn to be the leader on defense. If he can become a mixture of Mosley and Dont’a Hightower, DePriest could sneak in as a late first round draft pick.

Summary: Barrett Jones, Chance Warmack and D.J. Fluker set the bar high, but Kelly has the potential to match it. Like DePriest, Kelly is versatile on the offensive line. He can play guard and center. Alabama’s offense scored 38.2 points per game and totaled 205.6 rushing yards per game last season. Kelly displays exceptional footwork and is quick coming off the ball. He knows how to set the edge and create lanes for running backs as well as shield a defensive lineman away from the quarterback. Kelly needs to improve on making sure everyone on the line understands blocking schemes. He has been tossed into the conversation as a candidate for the Remington Award. Kelly has a high ceiling and can be a first round pick in 2015 NFL Draft. It will be up to him to lead this offensive line to a successful season.

Summary: Yeldon had a huge freshman season for the Crimson Tide in 2012. He tied Mark Ingram’s freshman record with 12 touchdowns.  Yeldon totaled 1,108 yards rushing and averaged 6.3 yards per carry in 2012. Yeldon recorded 1,235 yards rushing and 14 touchdowns in 2013; however, he struggled with ball security. Yeldon had five lost fumbles last season. Most of them came at critical moments in games. He has the size, speed, power and vision to be a force in the NFL. With Derrick Henry and Kenyan Drake on his heels, Yeldon can’t afford to fumble away opportunities for Alabama in 2014. If Yeldon has another 1,000-yard rushing season, he will be a first round pick in the 2015 NFL Draft.

Summary:  Under the leadership of Nick Saban, Collins has become a leader in Alabama’s secondary. He is a head hunter on special teams and a disciplined safety on defense. Collins finished second on the team in tackles with 70 in 2013. He recorded two interceptions, six pass breakups, two forced fumbles and two fumble recoveries. Collins has speed and great on ball instincts. He excels at reading the quarterback’s eyes and getting to the football. Collins is a hard hitting safety. He is projected as a first round pick by most college football analysts.

Summary: Cooper burst onto the scene for Alabama in 2012 as a freshman. He broke Julio Jones’s record (58 receptions, 924 yards) with 59 receptions for 1,000 yards and 11 touchdowns. Despite early struggles in 2013, Cooper finished his sophomore campaign strong. He had 45 receptions for 736 yards and four touchdowns. Cooper has top-tier speed along with great hands. He is a savvy route runner with exceptional leaping abilities. In Alabama’s Pro Day, Cooper ran a 4.31 in the 40-yard dash.  If he has a bounce back year in 2014, Cooper may forgo his senior season and pursue an NFL career.

Summary: Jones is an explosive receiver and an exceptional return specialist. He recorded 36 receptions for 349 yards and two touchdowns in 2013. On special teams, Jones had 45 returns for 952 yards and three touchdowns. He is a tremendous slot receiver, but can also be a deep threat on the outside. Jones displays great vision and can change speeds well. He could potentially be a first round pick next year, but he may fall between the second and fourth round.

Summary: With Cyrus in the NFL, it’s up to Arie Kouandjio to help Alabama’s offensive line gel together next season. He is an exceptional run blocker, but needs to improve on pass blocking.  Kouandjio displays a quick first step off the line, but tends lag a bit when he blocks at the point of attack. If he solely buys into the process, Kouandjio can have a breakout season in 2014.  He has a chance to be a late first round pick; however, Kouandjio could possibly go between the second and fifth round. 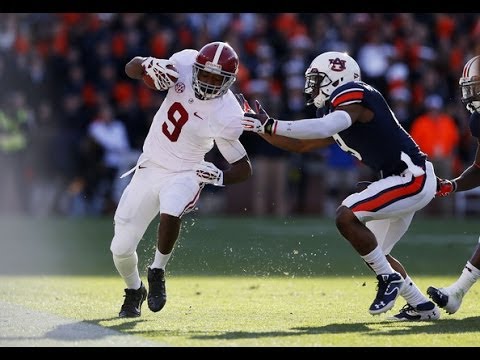