Slive discussed the SEC’s accomplishments in athletics and academics. When it came to football, Slive said the 2014 national title game was a minute too long. In his 12-year tenure as commissioner, Slive wants to build a bridge to prepare the SEC for the future.

“Most of the bridge is already in place,” Slive said. “The SEC is implementing strategies to build a culture of compliance.  The conference is increasing diversity and creating new initiatives for exposure. Conference expansion was also key adding Texas A&M and Missouri.”

Slive said the conference schedule would remain at eight games.  He wants to develop the SEC Network, which airs on August 14, 2014. Football will make its double-header debut on August 28, 2014. Texas A&M will visit South Carolina, while Vanderbilt goes to Temple. Its first triple-header is set for August 30, highlighted by Arkansas vs. Auburn.

“We’ve [Auburn] loss some key players that will be hard to replace,” Malzahn said. “Dee Ford, Greg Robinson, Tre Mason and Chris Davis just to name a few, but we do have experience back on both sides of the ball. We have our entire staff back for a second year. Our coaches are great coaches, but also great people in general. We have had a very productive spring and our players are focused on being balanced.”

As for quarterback Nick Marshall, Malzahn said it’s a privilege and a reward to represent Auburn at SEC Media Days. Last Friday, Marshall lost that privilege.

“We have high expectations for our players and specifically our quarterback,” Malzahn said. “Up until last Friday, Nick has been a model student, teammate and citizen. Nick made a mistake and he will have to deal with the consequences. I know he’s regretful and he feels very bad about it.”

Malzahn said defense end Carl Lawson had a successful ACL surgery. Lawson injured his knee the last week of spring practice and had surgery in May. He is rehabbing his way to recovery. Malzhan said he hopes to have Lawson back by the end of the 2014 season.

Despite the hot seat conversations, Florida’s head coach Will Muschamp displayed a smile at the podium. When asked about last season, Muschamp said you only control the things you can control.

“I haven’t always practiced it, but I try control the things I can control,” Muschamp said. “I have to help coach and develop our football team. There was never in my mind that I wouldn’t be retained. The athletic department [Jeremy Foley] understood the circumstances we went through last season and we intend on correcting them.”

As for the Florida—Tennessee rivalry, Muschamp said the passion never left.

Muschamp said adjustments will made in the fall offensively, but he was proud of the progression Florida made in the spring.

“That’s a credit to our staff and players,” Muschamp said. “Our players have been receptive to what’s going on in practice and they have shown a lot of enthusiasm. We have a lot of young talent, but I will take talent over experience any day.”

When asked about quarterback Jeff Driskel, Muschamp said he is a great competitor.

“Jeff’s competitiveness is his biggest strength, but also his greatness weakness,” Muschamp said. “We love his toughness, but he has to learn how to play smart.”

Day one started with history and displaying the new college football trophy, but ended with what everyone expected. It’s a new era in college football, but the SEC remains the same.

Muschamp and Florida will look to erase a 4-8 2013 season. Malzahn and Auburn looks to build of last season’s success and push for another national title opportunity. Will Muschamp coach himself off the hot seat? For Auburn, has the hunter become the hunted? 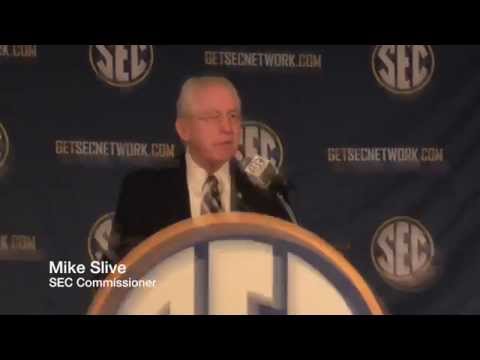