Physicality is the lone word that Nick Saban and defensive coordinator Kirby Smart have emphasized this offseason. Saban and company want Alabama to be tough, yet sound.

Generating sacks and stopping the run is good, but a consistent secondary makes any defense stronger. The Crimson Tide loss Ha Ha Clinton-Dix and Vinnie Sunseri to the National Football League, but returns some play makers to the fold.

Alabama fans witnessed the emergence of Landon Collins in 2013. He stepped in for Sunseri and provided a significant impact. Collins finished second on the team in tackles with 70. He recorded two interceptions, six pass breakups, two forced fumbles, two fumble recoveries and a touchdown last season.

Now anchored as a leader, Collins will have more eyes on him in 2014. He’s been named to numerous award watch lists and is being projected as a first-round draft pick in 2015. Every great leader needs a consistent supporting cast. Collins will draw the most attention, but who else is willing to step up to the plate?

2014 could be Jarrick Williams’s breakout season. Now a senior, Williams is one of the leaders in Alabama’s secondary. He started in 10 of 12 games last season as the Crimson Tide’s star (nickel back). Williams collected 40 tackles, two pass breakups and a sack in 2013. His deflection against Texas A&M last season helped Sunseri notch his second interception of the season. Off Williams’s tip, Sunseri took the pass for a 73-yard touchdown.

One of the biggest transitions this offseason has been Geno Smith’s move from cornerback to safety. Kirby Smart said that Smith has adjusted to the move well. After recording nine tackles as a freshman, Smith totaled 10 tackles and four pass breakups last season. Moving Smith to safety provides Alabama with another experienced player in the secondary. He’s a hard-hitter that plays the ball well.

Alabama has experience at safety; it’s the cornerback position that presents a mystery.  Deion Belue and John Fulton are gone, but the Tide returns experience and youth at corner.

Cyrus Jones had some bright moments in 2013. He came to Alabama in 2012 as a receiver, but was moved to corner in the following year. Jones had 25 tackles, five pass breakups, two interceptions and a sack last season. He’s not a big guy, weighing in at 5’10” 194 pounds, but Jones covers well. Coach Saban has raved about how much he’s improved. Saban said that Jones has taken on a leadership role in fall camp and is helping the younger players get adjusted.

Eddie Jackson was thrown into the fire last season, but came out royally. He played in seven games and recorded 19 tackles, three pass breakups, two fumble recoveries and an interception.  Jackson physical with receivers, but he also high points the ball well. Despite an ACL injury in the spring, Jackson has returned strong and is participating in fall camp. The timetable for Jackson’s return to game action has been set for September (against Florida), if not earlier.

Bradley Sylve made strides in 2013. Sylve is a burner who transitioned from receiver to corner late in 2011. Sylve had six tackles and two pass breakups as a redshirt freshman, but saw his numbers increase in his sophomore campaign.  He played in 8 games last season and totaled 10 tackles with two pass breakups.  Like Jones, Saban has talked about how Sylve has improved and how he’s making an impact in fall camp.

Not much is said about Maurice Smith, but Saban does consider him a versatile player. Smith tallied 13 tackles and three pass breakups in 2013. Like Jackson, Smith is six feet tall and is physical with receivers. It will be interesting to see how Alabama uses him this season.

Tony Brown and Marlon Humphrey will have their growing pains, but the potential on both freshmen is very high. Both players are six feet tall with a lot of speed. Brown is more of a hard –hitter, while Humphrey is a pure cover cornerback. Brown will start over Humphrey because he enrolled early, but expect both players to see the field.

It’s been documented that Landon Collins is the leader. It will be his job to make sure the secondary functions properly, but he can’t do it alone. Which of these players will step up and help him? Answers to this question will be revealed when Alabama plays this season. 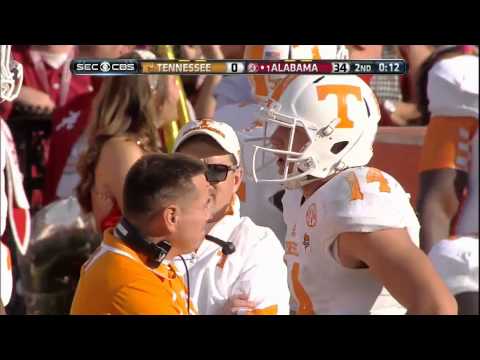