T.J. Yeldon [A] – T.J. Yeldon participated fully in practice last week and it resulted in a solid performance against Auburn. He totaled 19 carries for 127 yards (6.7 yards per carry) and two touchdowns. Yeldon secured the ball well and displayed patience in the hole throughout the contest.

Derrick Henry [A] – Derrick Henry wore Auburn’s defense down in the second half. He averaged 14.4 yards per carry. Henry finished with 72 rushing yards, including a 25-yard touchdown run in the fourth quarter. The score lengthened Alabama’s lead to 55-36.

Summary: Alabama’s offensive line was locked in Saturday. It set the edge in the run game, allowing the backs to total 227 rushing yards (6.7 yards per carry) and four touchdowns. Blake Sims had a clean pocket for much of the contest. The Crimson Tide achieved balance offensively against Auburn, totaling 539 yards (312 passing, 227 rushing).

Defensive Line [B] – Alabama’s defensive line affected Auburn’s quarterback Nick Marshall in the second half. D.J. Pettway, A’Shawn Robinson and Jonathan Allen all excelled at forcing Marshall to throw on the run. Jarran Reed led all defensive linemen with four tackles. Allen and Xzavier Dickson both record one sack apiece.

Linebackers [B-] – Alabama’s linebackers executed its gap assignments better in the second half. Trey DePriest made some punishing tackles against Auburn’s run game. He led the team in stops with 14. Reggie Ragland totaled three tackles and a fumble recovery.

Secondary [C]– Auburn’s receivers D’haquille Williams ( 7 catches, 121 yards) and Sammie Coates (5 catches, 206 yards, 2 touchdowns) both are NFL-caliber players. Both receivers shined under the lights, but Alabama’s secondary came through when it mattered the most.

Nick Perry has been clutch down the stretch. He led the secondary with 13 tackles, one pass breakup and a critical interception in the third quarter. Geno Smith had his best game of the season, registering 10 tackles. Landon Collins totaled nine stops and a pass breakup. Bradley Sylve was huge in the second half. He registered three tackles and two pass breakups off the bench. Cyrus Jones had eight stops, while Eddie Jackson finished with five tackles.

Summary: Auburn’s offense is fast paced. It’s expected to score and rack up a lot of yards. Alabama’s defense didn’t break, despite allowing 44 points and 630 yards. Not a single Auburn player totaled 100 yards rushing. The Crimson Tide forced two turnovers and played well in the second half.

Amari Cooper [A] – Amari Cooper had a national spotlight to himself Saturday and he relished it. He was targeted 16 times and caught 13 passes. Cooper ended with 224 receiving yards and three touchdowns, despite wearing a knee brace. Cooper made plays in space and burned Auburn’s secondary numerous times.

Summary: Alabama had to get Cooper involved early and it did. Two of Cooper’s three touchdown receptions (39 yards, 75 yards) were critical in Alabama’s comeback victory. DeAndrew White got involved as well. He had three catches for 19 yards; including a 6-yard touchdown reception in the fourth quarter that gave Alabama a 42-36 lead.

Summary: Adam Griffith was flagged for an illegal procedure on the first play of the game. JK Scott took over and excelled. Walk-on Gunnar Raborn made three of four extra points.

Summary: Alabama had Blake Sims’s back through it all against Auburn. Alabama’s backup quarterback Jake Coker got loose on the sidelines after Sims’s third interception, but Saban decided to stick with Sims.

Sims’s two touchdown passes to Amari Cooper in the third quarter brought life back inside of Bryant-Denny Stadium. His rushing touchdown and 6-yard touchdown pass to DeAndrew White gave Alabama a lead and secured an Iron Bowl victory. Overall, Sims completed 74.1 percent of his passes (20/27) for 312 yards, four touchdowns and three interceptions.

Two stats proved to be crucial in Saturday’s Iron Bowl, red-zone offense and rushing yards. Auburn had eight chances to score in the red area, but Alabama held it to five field goals. The Crimson Tide scored touchdowns on all five of its red-zone opportunities.

It wasn’t easy, but head coach Nick Saban and Alabama got a win. Saban now improves to 5-3 against Auburn. Alabama’s 55-44 victory in Saturday’s Iron Bowl marked the highest scoring game in series history. Alabama’s T.J. Yeldon and Amari Cooper both have owned Auburn in their careers. Yeldon has totaled 306 rushing yards and four touchdowns against the Tigers. Cooper has recorded 24 catches for 511 yards and six touchdowns against Auburn.

Senior quarterback Nick Marshall gave a valiant effort. He tossed for 456 yards and three touchdowns, but Alabama’s defense adjusted and held Auburn to 18 points in the second half.

Alabama will remain No.1 in the College Football Playoff rankings. Mississippi State’s loss to Ole Miss will remove it from the conversation. The Crimson Tide can clinch a berth in the playoff with a victory over Missouri next week.

Amari Cooper tied his own single-season record against Auburn. His 224 receiving yards equals the output he had against Tennessee. Cooper’s 13 receptions makes him Alabama’s all-time leader in career receptions (207). He has 103 catches for 1,573 yards and 14 touchdowns this season. Cooper’s masterful Iron Bowl performance should be enough to send him to New York City for a Heisman presentation, but he may have to duplicate the very same numbers against Missouri to be on the safe side.

Saturday night was an Iron Bowl for the ages. Blake Sims ended on a high note and Amari Cooper had a Heisman-like performance. Alabama’s defense tightened up in the second half and its fan base was on edge from start to finish. The Vegas boys were pleased in Alabama’s ability to cover its 9-point spread. The Crimson Tide erased a horrible 2013 memory by defeating Auburn 55-44. Alabama heads to Atlanta next week with an opportunity to achieve its 24th conference title. 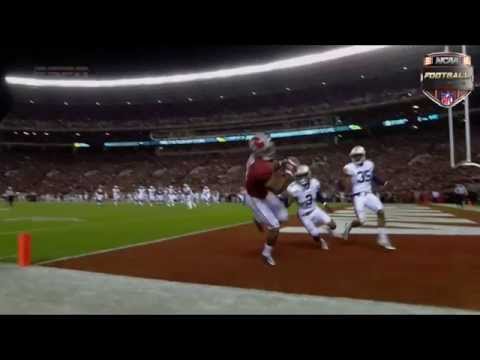