Alabama has tamed two tigers this season, but it needs to defeat one more for its 24th conference title. The 79th Iron Bowl was intense, but Saturday’s Southeastern Conference title game will be a brutal test between Alabama and Missouri.

Sophomore quarterback Maty Mauk has had a roller coaster season. He suffered a midseason slump, after a strong start. Mauk regained his composure down the stretch and has been huge for Missouri in the last couple of games. He’s completed 53.5 percent of his passes for 2,279 yards, 23 total touchdowns (one rushing) and 11 interceptions.

Russell Hansbrough anchors Missouri’s run game. He’s registered 949 yards rushing and nine touchdowns. Marcus Murphy is a change of pace back. He’s tougher than he looks, but Murphy loves to bounce plays to the outside. Murphy has 747 rushing yards and four touchdowns. Mauk is lethal as a runner if defenses don’t watch him. He’s totaled 336 yards rushing.

Bud Sasser is Missouri’s primary receiver. He has 65 catches for 904 yards and nine touchdowns. Sasser’s averaged 75.3 yards receiving per game. Jimmie Hunt has emerged as Mauk’s dependable second option. Hunt has 34 receptions for 529 yards and seven touchdowns. Darius White has appeared in nine games, but his impact has been crucial. White has 26 catches for 318 yards and four touchdowns.

Auburn’s quarterback Nick Marshall dominated Blake Sims for much of the game, but Sims showed resiliency in the second half and delivered Alabama to a 55-44 comeback victory. Alabama outscored Auburn 34-18 in the second half. The Crimson Tide held Auburn to 174 yards rushing. Amari Cooper displayed a Heisman-like performance. He totaled 13 catches for 224 yards and three touchdowns.

Senior quarterback Blake Sims has come through for Alabama in critical moments this season. He hasn’t been as consistent as he should be, but he finds a way to get victories for the Crimson Tide. Sims has completed 63.1 percent of his passes for 2,988 yards, 30 total touchdowns (24 passing, 6 rushing) and seven interceptions.

Junior running back T.J. Yeldon had a solid performance against Auburn. He rushed for 127 yards and two touchdowns on 19 carries. He’s battled injuries all season, but Yeldon’s managed to total 885 rushing yards and 8 touchdowns. Yeldon is 115 yards away from a third 1,000-yard season. Sophomore Derrick Henry wore down Auburn’s defense in the second half. He averaged 14.4 yards per carry, totaling 72 yards and a touchdown. Henry has 754 rushing yards and eight scores this season. Sims has accounted for 302 rushing yards.

Gary Pinkel and Alabama’s head coach Nick Saban formed a friendship as teammates at Kent State University in the 1970s. Both men played under head coach Don James. James mentored both men and gave them their first coaching experience as graduate assistants with the Golden Flashers. Pinkel became Toldeo’s head coach in 1991, after Saban left to become a defensive coordinator for the Cleveland Browns. Both coaches have guided their programs to conference title games. Saban stands at 4-1 (2-0 LSU, 2-1 Alabama), while Pinkel has yet to bring home any hardware (0-3). Saban and Pinkel will battle for SEC supremacy Saturday in Atlanta. 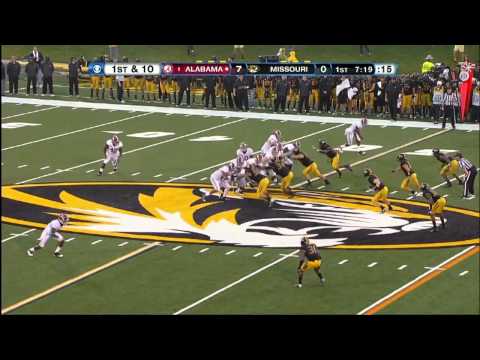