He was an all-state selection as a junior (2001) and senior (2002) at Cleburne County High School in Heflin, Ala. Prothro led the team to the playoffs in both seasons, including an appearance in the AHSAA Super Six 4-A Championship in 2002, but it lost to UMS-Wright.

Prothro enrolled at Alabama as a freshman in 2003, scratching playing time in nine games.

He collected 197 snaps at receiver and return specialist, totaling 328 all-purpose yards and a touchdown. Prothro averaged 11.9 yards per catch and 25.8 yards per kick return.

He blossomed into a dynamic play maker as a sophomore in 2004.

Steady progress as a freshman and sophomore had set Prothro up for a huge junior year.

He tallied 538 receiving yards with two touchdowns on 41 catches, and 581 kick return yards with a touchdown on 22 attempts, prior to the 2005 season.

Alabama faced Southern Mississippi inside Bryant-Denny Stadium on Sept. 10, 2005. The Golden Eagles led Alabama 21-10 in the second quarter with 29 seconds remaining in the first half. Offensive coordinator Dave Rader decided to roll the dice and go for it on fourth down.

He dials up a Hail Mary pass for quarterback Brodie Croyle. The offensive line gave Croyle time in the pocket, and he locked eyes with Prothro downfield. Prothro, who stood at 5-foot-8, 178 pounds, was working on Southern Mississippi’s defensive back Japser Faulk.

What Faulk didn’t know, was that Croyle had released the ball while his head was turned. Prothro located the ball, caught it and put it on the back of Faulk’s neck.

The two rolled into the end zone battling for possession. Referees had a difficult time deciphering who the ball should go to, but they ended up ruling in favor of Alabama.

Prothro’s concentration gave the Crimson Tide a touchdown, and provided a momentum swing going into halftime. Alabama ended up winning the matchup 30-21.

Protho’s catch earned him Southeastern Conference Player of the Week honors and recognition from ESPN as the Pontiac Game Changing Performance play. He would strike again three weeks later against Florida.

Protho fumbled the ball on special teams, but he redeemed himself in Alabama first offensive possession of the game with an 87-yard touchdown reception from Brodie Croyle.

Fans inside Bryant-Denny Stadium erupted, as Alabama dominated Florida 31-3. Prothro would finish the game with 134 yards with two touchdown on five receptions, however, the Florida game would become the last of Prothro for Alabama fans.

Coaches are taught to rest their star players when a game is in the bag, but Shula wanted to make a point. Prothro had tied his career-high in receiving yards and touchdowns, yet Shula didn’t rest him late in the game.

Prothro was on the field in the fourth quarter for a fourth down play. He tried to make a touchdown reception, but was unable to catch the ball. Prothro landed awkwardly on his leg, and suffered a compound injury to his tibia and fibula. He played in five games in 2005, and would miss the entire 2006 season because of surgery. The tearing of his calf muscles was deeper than what most had originally thought, and despite three extensive surgeries and rehabilitation, Prothro’s collegiate career and a shot in the National Football League was over.

Prothro was one of the most talented athletes at Alabama in the early 2000s, yet Shula’s greed robbed Crimson Tide fans of what could have been. He was placed on a medical hardship scholarship and was removed from the football roster on Aug. 3, 2007.

His playing days may have ended, but Prothro’s mindset kept going.

He marched with a bachelor’s degree in the College of Human and Environmental Sciences from the University of Alabama in August 2008. Prothro currently works as an Account Manager for Coca-Cola in Tuscaloosa, Ala. He served as Grand Marshal for Alabama’s homecoming game against Ole Miss on Oct. 16, 2010. Prothro’s memorable catch won him an ESPY Award in 2006. The play has been rated by The Best Damn Sports Show Period as the eighth greatest catch of all-time. 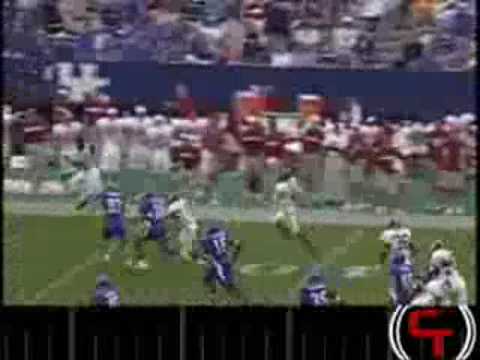