The Heisman Trophy has been awarded 78 times since its installment in 1935.

A player has to generate a defining moment before capturing the coveted bronze award.

This statement has been prove true by 77 individuals that have won, and others who were in the competition. Former Alabama running back Mark Ingram became the first Crimson Tide player to win a Heisman Trophy in 2009. Trent Richardson became the program’s featured back two years later, and came close to bringing Alabama its second Heisman winner.

As a junior, it was Richardson’s job to take pressure off first-year starting quarterback AJ McCarron. He stood at 5-foot-9, 225 pounds, and displayed speed, power and vision.

Richardson saw action in 13 games in 2011, totaling 1,679 rushing yards with 21 touchdowns on 5.9 yards per carry. He was a solid pass catcher, accounting for 338 yards and three touchdowns on 29 receptions. His performance against LSU in the 2012 national title game was good, however, many Crimson Tide fans look at his game against Ole Miss as his Heisman moment.

Vaught-Hemmingway Stadium in Oxford, Miss., is home to Archie, Cooper and Eli Manning.

The stadium may have housed the first family in the Southeastern Conference, but it’s still one of the smallest venues in the region. Ole Miss’s 2009 meeting against Alabama was the most Vaught-Hemmingway has held in attendance, 62,657 fans. A stunning performance from Mark Ingram guided the Crimson Tide to a 22-3 victory over Mississippi in that matchup.

Richardson amazed 61,792 viewers in Oxford on Oct. 15, 2011. Ole Miss had no answers for Alabama’s run game, and its defense wanted nothing to do with No. 3 in crimson and white.

Richardson pounded Mississippi for 183 yards and four touchdowns on 17 carries. Alabama was leading Ole Miss 24-7 in the third quarter, when Richardson aggravated every fan in Oxford.

He took the handoff from McCarron, made numerous defenders look silly in space, and accelerated down field for a 76-yard touchdown run. His ability to change speeds on a dime proved stellar, as Richardson put a shake ‘n’ bake move on Ole Miss’s defensive back Senquez Golson, prior to entering the end zone. It excited everyone on Alabama’s sideline, including Blake Sims (running back at the time), who embraced Richardson after the play.

Alabama handled Mississippi 52-7, and the chants of “Richardson for Heisman” began.

Richardson’s run against the Rebels was special nonetheless. He finished the 2011 season as a unanimous All-American and the SEC’s Offensive Player of the Year. His efforts earned him first-team All-SEC honors and Richardson took home the Doak Walker Award in 2011. 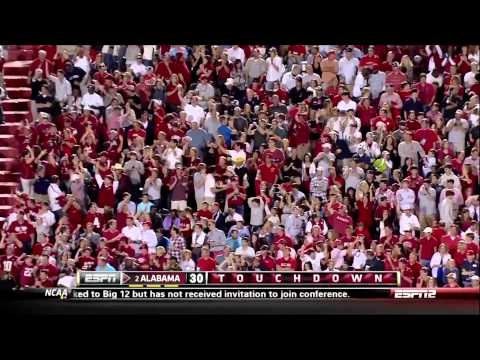