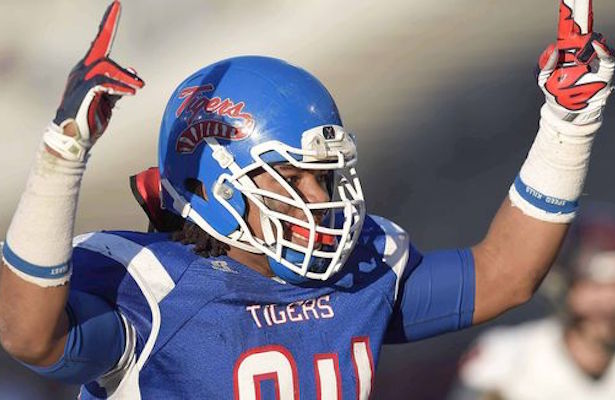 The #5 player in our Top Ten Most Wanted is the one of the top defensive lineman in the nation and the top on our list, defensive end Jeffery Simmons.

At 6-foot-4, 265 pounds, Simmons uses his physicality to make a difference on just about every play. He audibly crashes into opponents on a consistent basis and does not take a play off on defense.

Of all the players I have seen from the 2016 class, Jeffery has been the most impressive by far. His heart and motor are second to none and he could come in and make a difference immediately for the Crimson Tide. He has the ideal size and ability to become a playmaker on the edge of the defensive line a la current Alabama defensive ends Jonathan Allen and Da’Shawn Hand.

Nuxobee County also uses Jeffery Simmons as a tight end, especially in goal line situations, and he has the leaping ability to go up and get balls over smaller defenders. He has been picking up a great deal of interest so far this season, and when you watch him play it’s easy to see why.

Simmons is strongly considering the Crimson Tide in addition to the two main Mississippi schools. He is being recruited to Alabama by defensive line coach Bo Davis and defensive coordinator Kirby Smart.