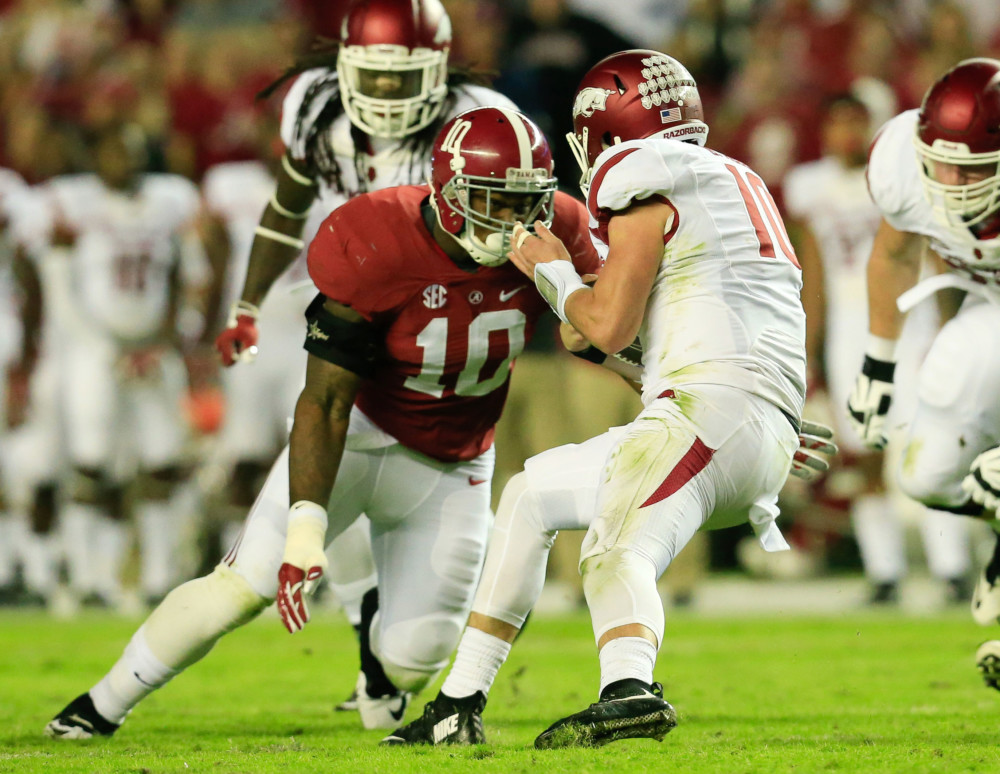 Foster is finally getting his head in the same shape his body is.

Reuben Foster – Head and Body Finally Both Working Together

In high school, a star athlete just pretty much “does his thing”. One example was Alabama’s Derrick Henry, who was never concerned about blocking in high school. “They just gave me the ball and I did my thing.” he has been quoted as saying. Much was the same for Reuben Foster, who in high school was usually the “man among boys” in most of his games. Foster just wanted to blitz all the time, create chaos and deliver the big hits.

When he came to Alabama, he had the size, speed and muscle to make an impact, but his head was still going with the desire to do things his way. After all, it worked for him in high school and made him one of Georgia’s most sought after recruits, the Georgia defensive player of the year in just his junior year and one of the top recruits in the nation.

Coming into a complicated Saban/Smart defense like Alabama has, that rogue mentality just didn’t work. You had gap responsibilities, coverage responsibilities and more that he never had to bother with in high school where he saw himself as the one man wrecking crew. While he gained a headhunter mentality in high school, even his high school coach knew that he lacked the maturity in his head to go along with already matured body and muscle.

It wasn’t just getting the gap and coverage assignments down for Foster, there was also technique. Foster was prone to spearing himself into offensive players with a head first approach that was not only unsafe, but against the college rules. While he didn’t draw an excessive amount of penalties from his leading with the head style, he did receive a lot of unneeded punishment to his neck and head. Those injuries kept him from more playing time.

There’s an old football saying that goes, “The best player in the world isn’t worth a damn if he’s on the bench.” And for Foster, early on, that’s where he was most of the time. Though he made a name for himself on special teams, through his first two years, Foster was delegated to backup duty. Not because he didn’t have all the physical attributes he needed, but he just didn’t have the assignments and techniques down. That and he battled injuries, mainly “stingers” in his neck, from improper tackling technique of keeping his head lowered.

Since he was a valuable commodity and slow on the changing of techniques, the coaches gave him a higher than normal collar pad, to lessen the effect of neck injuries and Kirby Smart spend a lot of time with him working on tackling techniques and correct body blow absorption.  All the coaching seems to have paid off big for Foster.

Now in his third year, he’s no longer in Reggie Ragland’s shadow, but playing beside him as part of the best defensive front seven in all of college football. Foster still delivers the hits, but he now does so head up and correctly.

He’s also transitioning from pupil to leader, a role that excites both head coach Nick Saban and defensive coordinator Kirby Smart. But what’s best is that he is no longer “going rogue” as a defensive player, but is a cog in a very well constructed and working defensive unit that worry about doing their own jobs right, sealing up their gaps and knowing the Foster is where he is supposed to be and that his gaps and assignments are being covered as well.

So far this season, Foster is tied for second most tackles on the team with Jarren Reed with 24 solo tackles, 15 assisted for a total of 39. Reed has just 10 solo tackles but has 29 assisted ones for a total of 39 also. Both still trail Reggie Ragland who has 71 total tackles, 42 solo and 29 assisted. Ragland stayed for his senior year and really increased his NFL stock. Many think that Foster will do the same and that he will be more than ready to fill Ragland’s shoes. Off the field the two are very close friends.

Ragland is glad to see his friend help anchor the linebacking corp with him and to see the very visible improvements he’s made in tackling technique and mental responsibility. Ragland often tells the press how proud he is of Foster and how he “stepped it up” both from the aspect of assignments to taking on and disposing of blockers.

Now Foster’s head is being utilized for more than just spearing offensive players, but for helping run a finely tuned defense and self control. Now finally, the head and body are both where they need to be.