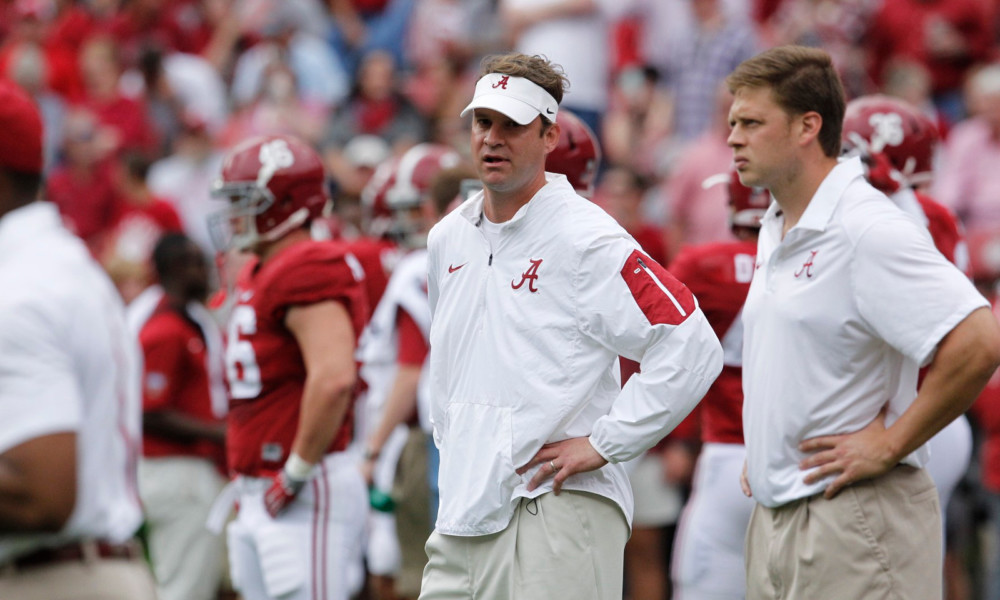 Someone has taken notice of Lane Kiffin’s work at Alabama as an offensive coordinator, and it is the Maryland Terrapins. According to Maryland’s football reporter Jeff Ermann, Kiffin was interviewed for the job this week. He was hired to Alabama’s staff on Jan. 10, 2014, and made its offense one of the nation’s best. The Crimson Tide averaged 36.9 points per game and 6.6 yards per play. Former quarterback Blake Sims threw for 3,487 passing yards with 28 touchdowns to 10 interceptions. Running back Derrick Henry and T.J. Yeldon both neared 1,000 rushing yards and ex-Alabama receiver Amari Cooper won the Fred Biletnikoff Award last year.

Kiffin, 40, has the ball rolling again for Alabama this season.

Its averaging 33.1 points per game and Henry has 1,254 rushing yards with 17 touchdowns. He has instilled confidence in quarterback Jacob Coker. The senior stands with 1,807 passing yards and 11 touchdowns to seven interceptions.

He has completed at least 70 percent of his throws in the last four games.

Kiffin even has this year’s group of wide receivers playing at a high level. Freshman Calvin Ridley leads the bunch with 52 catches for 576 yards and three touchdowns.

Alabama captured its 24th Southeastern Conference title last season and is on the verge of getting another one.

His coaching career began at Fresno State from 1997-98 as a graduate assistant.

Crimson Tide head coach Nick Saban has three assistants that been in numerous heading rumor mills: Kiffin, defensive coordinator Kirby Smart and offensive line coach Mario Cristobal. Kiffin has been the first to accept and step up for an interview. Does he leave after this season? Time will tell.