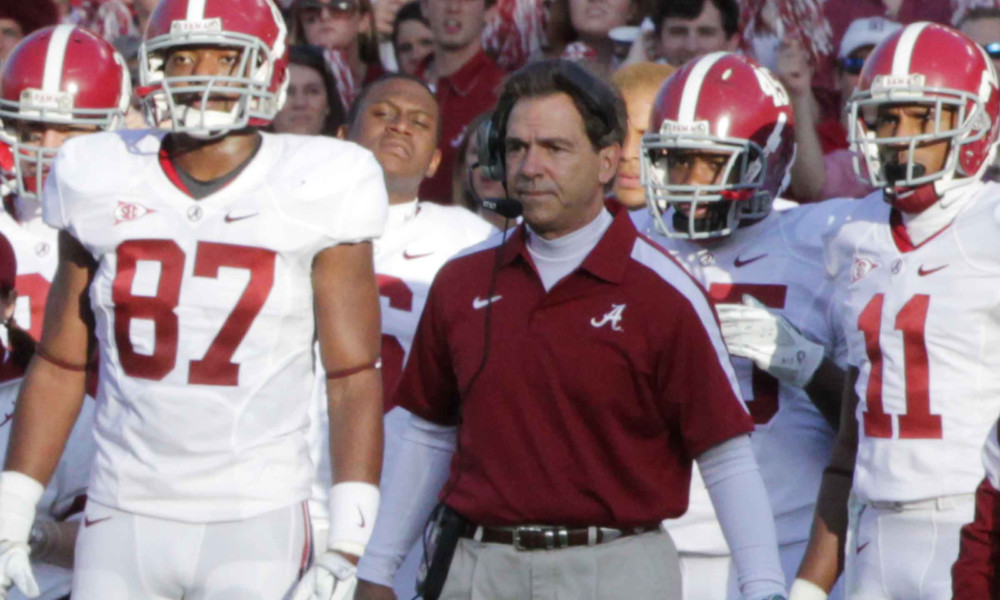 Nick Saban took over the Alabama football program after the Crimson Tide lost their fifth straight Iron Bowl in 2006. The rivalry had been dominated by Auburn head coach Tommy Tuberville and the Tigers seemed to be even better when they played in Tuscaloosa. Athletic Director Mal Moore went out and got Saban, hoping to flip that dominance in the series.

In Saban’s eight games against Auburn, dominance isn’t the exact word that comes to mind but he has put the Crimson Tide back on top of the state. He is just 5-3 in the annual Iron Bowl game but the three losses have come by a combined 14 points while the five wins were by a combined 129 points.

Saban has helped bring Alabama back to the top of college football and with Auburn’s success, this rivalry game has been at the front of everyone’s mind every season. ESPN’s College Gameday has been at the site of the Iron Bowl for three of the past four seasons. The game has not only directly led to six of the last seven SEC West champions but also five conference championships and four national championships.

With Iron Bowl week upon us, we take a look at the past eight games in this series and how Nick Saban has helped bring the rivalry to the front of college football.

Things didn’t go as planned in Saban’s first Iron Bowl. His team was ranked 17th in the country following their 41-17 win against Tennessee in October but Alabama had a nightmare finish in the month of November. The Tide were coming off an embarrassing loss at home to Louisiana Monroe and had to travel to Auburn. Tuberville and the Tigers used their normal formula of rushing and defense to put their Iron Bowl winning streak up to six.

Ben Tate averaged 7.0 yards per carry for Auburn and Brad Lester converted a late fourth down to clinch the game. The Tiger defense held John Parker Wilson to a 46 percent completion rate and just 2.6 yards per pass attempt. D.J. Hall only had three catches in the game.

The Crimson Tide were back on top of the state of Alabama and it was in convincing fashion. Alabama’s win knocked the Tigers out of bowl eligibility and sent the Tide to their first undefeated regular season since 1994. It was the first shutout by Alabama in the Iron Bowl since 1992 and their biggest margin of victory since 1962. The Tide were just up 10-0 near the end of the first half but a big third quarter helped put the game out of reach.

Terrence Cody recovered a fumble that led to a Wilson touchdown pass and was the lead block on the first Mark Ingram touchdown run. Alabama outgained the Tigers 421-170. Marquis Maze caught a touchdown pass from Greg McElroy late in the game to put the score at 36-0 and give the Tide their first Iron Bowl victory since 2001.

This game may be the most similar to the 2015 matchup as the Crimson Tide went into a hostile environment as a heavy favorite. Just like this year’s team, the 2009 Alabama team relied heavily on the run game and defense. They had a Heisman contender at running back who had helped them get to the top spot in the country. Auburn was having an average season but could still play good defense and used some tricky plays to take an early 14-0 lead. The Tigers actually outgained Alabama by 40 yards and only allowed 1.4 yards per carry to Ingram.

The Crimson Tide responded well with touchdowns by Trent Richardson and Collin Peek but were still trailing late in the game. Greg McElroy threw a late touchdown to Roy Upchurch to take the lead and the Tigers’ hail mary was swatted down to keep the Crimson Tide undefeated. Alabama ended up winning the national championship, their first under Nick Saban.

It was almost identical to the 2009 Iron Bowl. The home team built an early lead but it was the better team that came away with a win and eventually a national championship. Alabama held a 24-0 lead but Heisman winner Cam Newton led the Tigers back with four touchdowns including the game winner to Philip Lutzenkirchen early in the fourth quarter. The Auburn defense managed to hold on late to keep their undefeated season alive.

Alabama outgained the visitors by more than 100 yards but lost two fumbles and only managed to run for 79 yards. It is the largest blown lead in the history of Alabama football and it happened at home to the hated rivals. The Tide managed to finish off the season at 10-3 with a strong bowl win over Michigan State.

This is another past Iron Bowl that seems very similar to the 2015 matchup. The Crimson Tide had already lost one game but they were clearly one of the best teams in the country and still in the hunt for a national championship. They were led by a deep and talented defensive group, specifically at linebacker. Auburn was a bowl eligible team already but was struggling at the quarterback position and relied on a trio of backs to get the offense going.

The Crimson Tide held the Tigers to 140 total yards of offense and forced two turnovers. Michael Dyer, Onterio McCalebb and Tre Mason were held to a combined 64 yards rushing. Auburn’s only scores came on a fumble recovery in the end zone and a kickoff return. A.J. McCarron threw three touchdown passes and Trent Richardson ran for 203 yards to lead the Tide’s offense.

This one was never going to be close. The Tigers were having an awful year in Gene Chizik’s final season and the Crimson Tide were on their way to another national championship. Alabama outgained the Tigers 483-163 in total offense and scored 42 first half points. Then there is everyone’s favorite stat of the day: Alabama had 7 touchdowns, Auburn had 7 first downs. The Crimson Tide were dominant from beginning to end.

McCarron threw four touchdown passes, two each to Amari Cooper and Kevin Norwood. Eddie Lacy ran for two more touchdowns while T.J. Yeldon added one for himself. Robert Lester and Ha Ha Clinton-Dix both had an interception.

In the highest scoring Iron Bowl ever, the Crimson Tide had to come from behind to beat the underdog Tigers in Tuscaloosa. It was Blake Sims and Cooper that helped lead Alabama out of a 12-point hole to go on a 34-3 scoring run. It included two touchdown passes from Sims to the Heisman candidate and a touchdown run by Sims. Auburn gained 630 yards of offense but couldn’t capitalize inside the red zone early in the game. The Tigers had two first half touchdowns of over 35 yards while Daniel Carlson hit four field goals from inside of 25 yards.

Alabama’s defense was beaten but the offense wouldn’t give up and continued breaking down the Tiger defense in the second half. Yeldon had 124 yards and two rushing touchdowns while Derrick Henry averaged more than 14 yards per carry and scored once. It kept Alabama at the top of the rankings and led them to another SEC Championship.