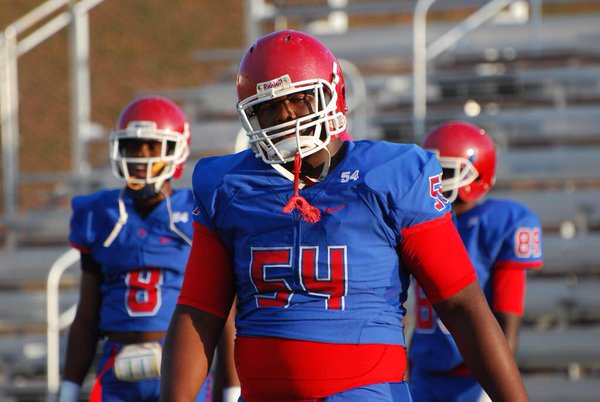 Tramonda Moore, a 4-star offensive tackle out of John Marshall High School in Oklahoma City, Oklahoma, is the number one player in the state, and a U.S. Army All American for good reason.

Moore is a big body at 6’6″, 330 pounds and he is a versatile player, being able to move at the guard and tackle position. He is powerful and is very fluid in his movement for his size, which is a big reason why some schools pursuing him to play in the interior of the defense. He may have the most upside playing at the guard spot, but has the length and intangibles to play tackle. He would be a great addition to Alabama’s 2016 offensive line class.

On Sunday night, Moore announced his top four schools, via his Twitter:

As expected, he also has listed his home state schools of Oklahoma and Oklahoma State, and after an impressive visit to TCU for their upset of Baylor, the Horned Frogs also cracked his top four.

“I love Alabama’s facilities and I am very impressed with the production they have had with their offensive lineman” said Moore. The four-star prospect has been recruited heavily by offensive line coach Mario Cristobal, a big factor with his interest in Alabama. “It has been great getting to know Coach Cristobal” Moore said. “He and I are really close. I also have a strong relationship with the entire coaching staff”.

The Oklahoma City product is definitely eyeing the Tide at the moment and was tuned in for the SEC Championship victory over Florida on Saturday, calling it “A big time win for Alabama”.

As for his prediction for the Crimson Tide’s upcoming playoff matchup with the Michigan State Spartans, Moore said, “Both teams are very great teams, but I think Alabama will pull away in the fourth quarter and get to the National Championship”.

You can follow Tramonda Moore on Twitter at @_TMOE55, and stay tuned on his recruitment with Touchdown Alabama, as he is set to decide on signing day but told TDAM that “that could change”.