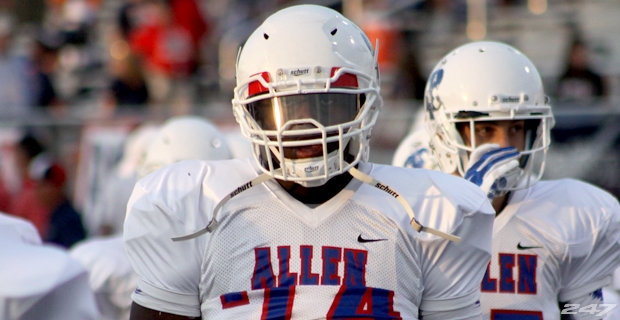 The nation’s top offensive lineman, Gregory Little recently made some noise in the recruiting world when the consensus #2 player in the 2016 class delayed his commitment decision in November so he could focus on helping the Allen Eagles get their fourth straight state title. Little was set to decide between Ole Miss, Alabama, Georgia, LSU and Auburn. Allen suffered their first loss in 56 games in the 6A Texas state championship game to Westlake and on Wednesday, Little announced via Bleacher Report that he would be attending Ole Miss next year. See the video reveal below.

The nation's No. 2 ranked recruit @Thegreglittle is headed to Ole Miss & ready to wreak havoc on the SEChttps://t.co/Len63Bzpm9

The Ole Miss pick for Little comes as no surprise as 2013’s top offensive lineman and Ole Miss All-American, Laremy Tunsil is set to depart for the NFL after the Sugar Bowl. This gives Little an opportunity to play right away and be an impact player for the Rebels as soon as he steps foot in Oxford. According to his mother, Greg fell in love with Ole Miss and began to compare the other schools to Ole Miss and apparently none could compare.

This was a big miss for Alabama, but it was not detrimental to the 2016 recruiting class. Alabama has two tackles enrolling early in January, five-star California product, Jonah Williams and the nation’s top JUCO offensive lineman, Charles Baldwin. Baldwin is expected to step in right away at right tackle with senior Dominick Jackson set to leave after this season, whereas Williams will look to work his way to playing time and learn from the older guys on the roster. Williams is a 6’5″, 300 pound tackle out of Folsom, CA who was the anchor of the Folsom Bulldog offensive line, using his length and finesse skill set  on defenders, helping his QB throw for 4,194 yards this season. He will be a guy to watch this spring as he learns the system. Baldwin is a 6’5″, 315 pound prospect out of Brooklyn, NY, originally from Windsor, CT. He has been ranked by many as the top JUCO offensive lineman, and for good reason because he has the ideal size, strength and game IQ to compete at the next level. He should be able to pick up the system quickly and make an immediate impact in the spring.

Although Greg Little would have sent the Tide through the recruiting rankings, Cam Robinson is still here for at least another year and no recruit will be able to take that spot from him, Robinson is the anchor of this inaugural Joe Moore award-winning offensive line and with Ross Pierschbacher, J.C. Hassenauer, Bradley Bozeman and Alphonse Taylor returning with the addition of the experienced Baldwin, this unit is not in too much danger from missing out on Little.