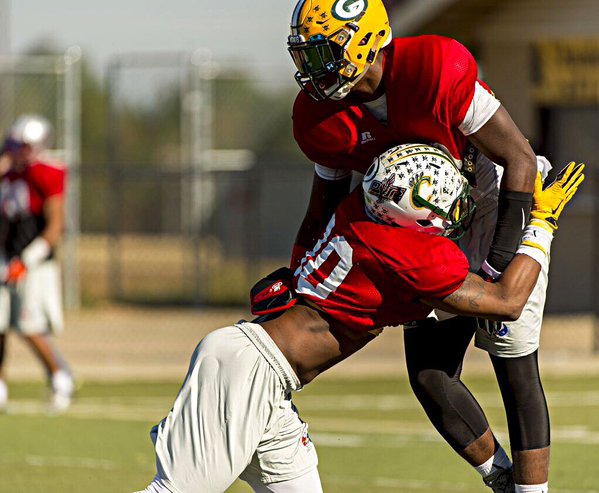 Blessed ? to be in this situation and enjoy recruiting ? but it's down to the wire now ? . #Final3 #Blessed ?? pic.twitter.com/Ik2dULW5LL

As expected, Wilson’s top three consists of Florida, Alabama and Georgia. Three schools that Wilson could undoubtedly contribute early at. The 5-star linebacker has been very vocal about these three schools on Twitter and to the media. He fits well into all three defensive schemes, enjoys each coaching staff and could see himself at all three universities. Here’s a breakdown of the three, what attracted Wilson to each program and how their system works in Wilson’s favor.

Florida: The Gators have been Wilson’s leader for some time now, and he is not afraid to remind you of it. He would likely be a strong side linebacker in Florida’s system due to his athleticism and outstanding range from the linebacker spot. Wilson has been very vocal about his respect for Jim McElwain and his staff, being a big reason why Florida is his leader. It also helps that his high school teammate and one of his best friends, cornerback Tony Nelson is committed to Florida too. He will visit Gainesville January 29-31st, which is the last of the three visits.

Alabama: Wilson became very high on Alabama after taking an unofficial visit for the LSU game. He has been beyond impressed with Alabama’s dominance on the defensive side of the ball and could see himself in a dominant defense like that. Ideally, Wilson would be at the Will Linebacker or a strong-side linebacker in the Tide’s 3-4 base defense, he has the size and range to succeed at either within the system. Wilson’s former Carver teammate is current Alabama linebacker Shaun Dion-Hamilton, who has been like a mentor to Wilson since he was young. SDH has a big impact on Wilson’s recruitment to Alabama. He will be back in Tuscaloosa January 22-24.

Georgia: Georgia is a school that really came up through the ranks with Wilson recently. This in big part is due to the recent hiring of Alabama defensive coordinator, Kirby Smart as the Bulldogs’ head coach. Smart and Wilson have a good relationship, which helped Georgia launch its way into his top three. He would likely play outside linebacker in UGA’s system but could have the size and range to play inside as well. He is set to visit Athens January 15-17.

Wilson will be making his decision on National Signing Day on February 3rd and each visit he takes will be crucial for each program in order to gain ground on Wilson. Be sure to keep an eye on his recruitment through his Twitter (@Iam_MW3) as well as Touchdown Alabama.

Justin Wagner is the Scouting Coordinator and Lead Recruiting Analyst for Touchdown Alabama Magazine, you can follow him on Twitter at @jwag718