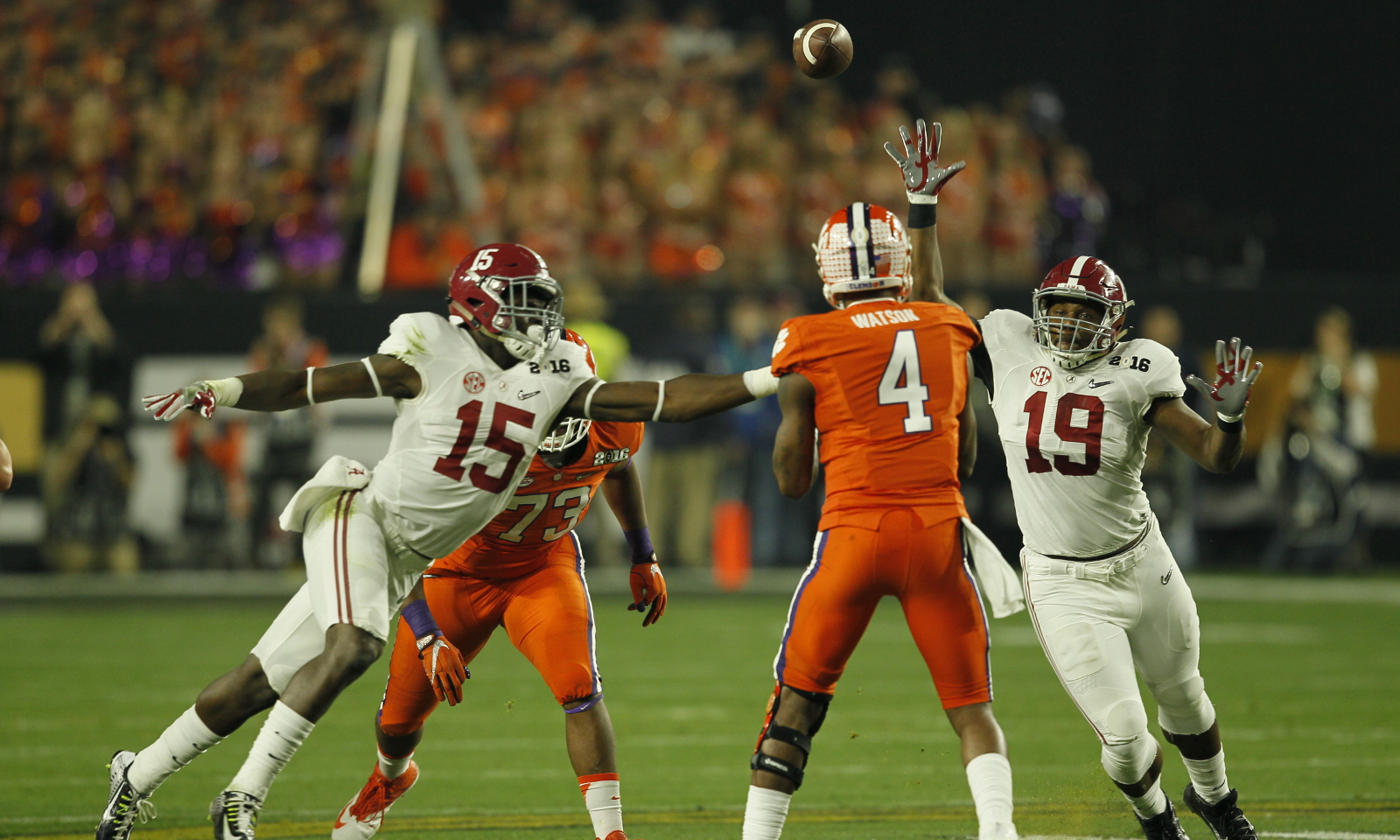 Alabama was dominant in all phases on defense this season.

Allen, Williams and Anderson all returned to create a bigger name and a better draft status, but mainstream media did witness the three perform at a high level against quality competition. Becoming a marquee name is more so in the cards of some other players that return for 2016.

Yours truly of Touchdown Alabama Magazine now unveils the five players to watch for on defense next season.

Hand’s name was called numerous times against Clemson in the national title game and for good reasons. The Woodbridge, Virginia native posted four tackles, with two coming for loss.

He finished the season with 6.5 tackles for loss and three sacks. Hand is a physical specimen at 6-foot-4, 273 pounds, who is starting to develop his craft as a edge rusher.

More time studying under Allen and Williams will strengthen his pass rush capabilities, while working beside Dalvin Tomlinson should increase his instincts against the run and batting down passes in coverage.

Fitzpatrick was one of three freshmen that benefitted from secondary coach Mel Tucker. He enrolled at Alabama from St. Peter’s Prep (Old Bridge, N.J.) and made an impact.

He recorded two interceptions in Alabama’s 41-23 win over Texas A&M, returning both for touchdowns.

With Cyrus Jones moving on, Fitzpatrick will slide to the other starting spot at corner with Marlon Humphrey. He excelled at “Star” in the Crimson Tide’s nickel and dime packages, giving up very few big plays. A chance to show his physicality will come into form next season.

Evans was one of two linebackers that Alabama grabbed from Auburn’s backyard. He emerged last season as a standout on special teams and showed signs of promise as an edge rusher.

Evans collected 10 tackles this season, with four coming for loss. He recorded Alabama’s lone two sacks against Clemson to give him four total on the year. The 6-foot-3, 225-pound linebacker is a smaller version of Tim Williams with a little more potential. He will have an increased role in 2016 with Denzel Devall and Dillon Lee both gone.

Signing Harrison in 2015 was huge for Alabama’s secondary.

He earned a starting role at “Money” in the team’s dime formation and totaled 17 tackles. Harrison put in a tackle for loss, six pass breakups, a quarterback hurry, a blocked kick and two interceptions. His first takeaway came against Georgia on Oct. 3, 2015. The Crimson Tide won the contest 38-10.

Harrison, 6-foot-3, 218 pounds, will take over at safety next season for the departing Geno Matias-Smith. A former four-star recruit, Harrison totaled 14 career pass breakups at Florida State University School (Tallahassee, Fla.), despite playing on both sides on the ball.

The return of Eddie Jackson will grow Harrison some more, but he showed promise this year of how good he can be.

Georgia head coach Kirby Smart, former defensive coordinator for Alabama, was fighting back tears during bowl prep for Michigan State and Clemson when the media asked him about Foster.

He had been recruiting Foster since he was in the ninth grade and was happy when the Auburn product turned its world upside down in the 2013 recruiting process. His first two seasons in crimson and white were marred by injuries, poor tackling techniques and lack of understanding.

Foster finally broke through in 2015, giving Crimson Tide fans exactly what it wanted.

He finished behind Reggie Ragland in total tackles (73) and put in eight tackles for loss. Foster added a sack, nine pass breakups and three quarterback hurries to his production.

He has gone from being a threat on special teams to a solid contributor on defense. The baton of great Alabama linebackers has been handed to him. Foster will be tasked to command the troops.