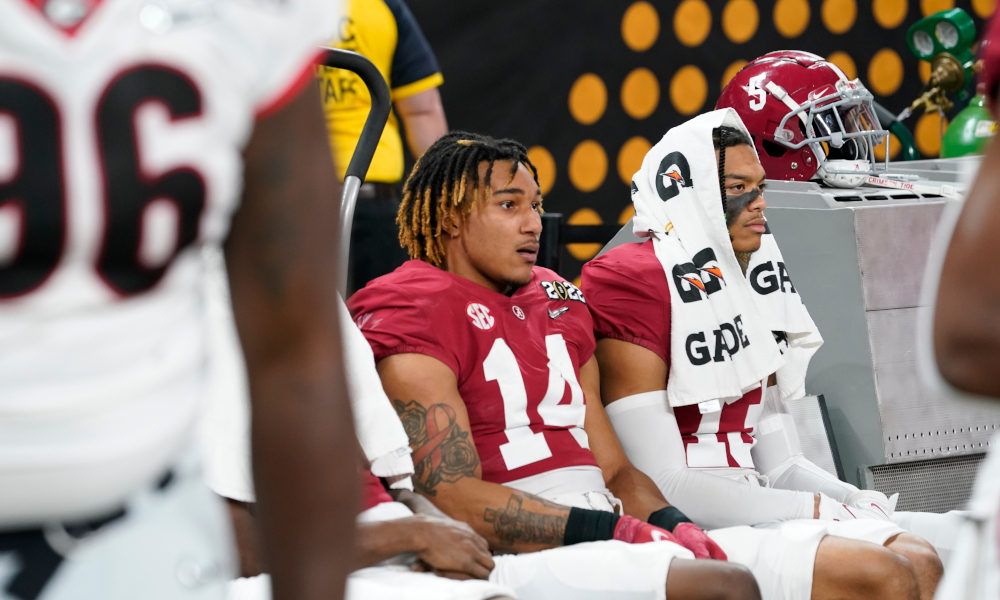 Nick Saban has to wait to the fall to surpass Paul “Bear” Bryant for national championships at the University of Alabama.

Alabama suffered an 18-33 loss to Georgia on Monday night in the College Football Playoff National Championship Game at Lucas Oil Stadium. Kirby Smart captured his first victory over Saban, and he delivered the Bulldogs to its first national title since 1980. Crimson Tide fans are disappointed in the loss, but it knows Alabama will be back on the CFP stage next season.

The Tide had several opportunities to put Georgia away, but it failed to score touchdowns in the red zone. Coach Smart hoisted the CFP Trophy, but it motivates Alabama to have more fire in the offseason. Spring football should be entertaining as the Crimson Tide looks to redeem itself. The Tide will graduate players to the NFL Draft, but more athletes will return.

The grades for Alabama’s offense, defense, and special teams from the title game are below.

Alabama’s offense did not put Georgia away early when it had the chance.

The Crimson Tide had four drives in Georgia’s territory — including two inside its 5-yard line – however, it scored one touchdown. Alabama settled for four field goals from Will Reichard, and it kept the Bulldogs in the game.

Bill O’Brien reverted to his egregious play-calling that plagued Alabama at the beginning of the season. Crimson Tide fans and former players were screaming for run plays, but O’Brien went to the passing game. When people called for pass plays, O’Brien dialed up the rushing attack. Bryce Young won the Heisman Trophy, but he would love to have some throws back. Young missed on a touchdown pass to Traeshon Holden and underthrew Jameson Williams on a 40-yard completion that led to an injury.

If Young led Williams in stride, he scores a touchdown, and the Tide walks out with a championship. Young tossed two interceptions, including one for a touchdown. Alabama’s young receivers dropped passes too. The Crimson Tide could not block Georgia upfront as the Bulldogs totaled three sacks, eight tackles for loss and made Young feel uncomfortable all game. Alabama had more total yards (399 to 364) and total plays (85 to 56) than Georgia, but the Tide did not cash in on opportunities.

Injuries caught up with the team, but not scoring in the red zone hurt more.

Alabama’s defense played well in the first half.

Georgia scored six points on its first five possessions of the game. Pete Golding had his group prepared for the matchup.

Alabama totaled six tackles for loss, one forced fumble, and a fumble recovery.

Khyree Jackson gave up a touchdown at cornerback, but it was his first game as a starter. Alabama’s inability to score offensively led to its defense wearing down in the second half. Georgia started pounding Zamir White and James Cook more, and the Bulldogs’ physicality took over. Golding had a strong game plan, but the defense got tired of its offense not scoring.

Will Reichard made four field goals on five attempts.

He made kicks from 37, 45, 37, and 21 yards. Reichard’s attempt from 48 yards got blocked, but he should not have been in that situation. James Burnip dropped two of his four punts inside Georgia’s 20-yard line, including a long punt of 43 yards. No one returned a punt off the Australian transfer, and Alabama’s coverage team allowed one return on a kickoff.

Reichard shouldn’t have attempted five field goals, but Alabama’s inept performance offensively left him no choice. He was the Crimson Tide’s offense before Bryce Young connected with Cameron Latu for Alabama’s lone touchdown of the matchup.

Alabama had all opportunities to be defending national champions, but it did not take advantage of them.

The Crimson Tide left points off the scoreboard and gave the Bulldogs confidence.

Frustration set in, and it led to turnovers for the Tide. Alabama will learn from the moment, and Nick Saban will have the team back in the CFP title game next fall. The Crimson Tide has to regain its physicality in some areas, but spring football will be entertaining in Tuscaloosa.