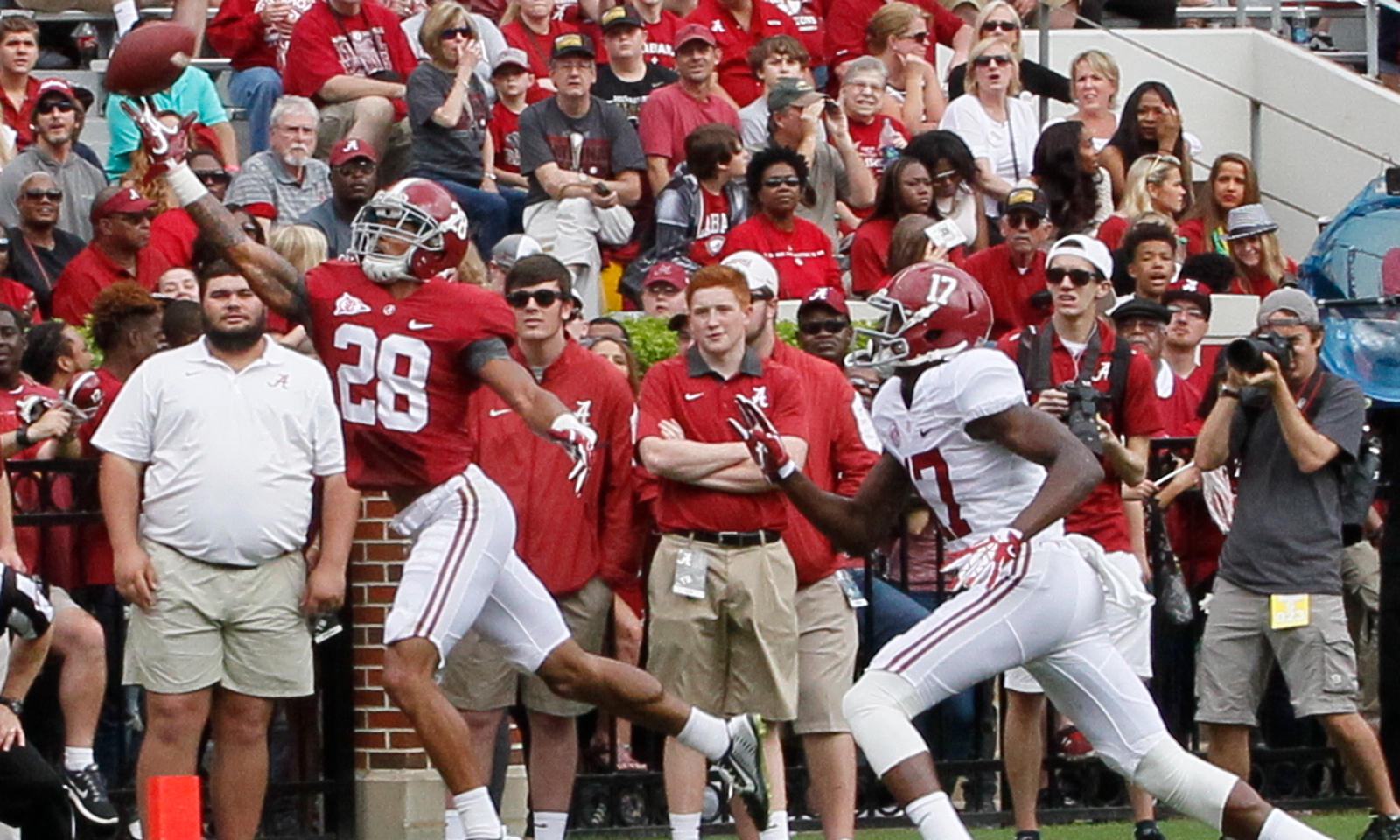 Fitzpatrick lined up at Star in Alabama’s nickel defense.

With Cyrus Jones headed to the National Football League, the 6-foot-1, 200-pound defensive back will move to the other corner position, opposite Marlon Humphrey. Fitzpatrick, who led position drills with Humphrey in spring practice, gains an opportunity to display physicality against tough and rangy wide outs. He had three tackles last week in the A-Day game.

A trio of players—Tony Brown, Maurice Smith and Anthony Averett—have seen reps at Star throughout practice.

The Crimson Tide recorded 19 interceptions in 2015, with four returned for touchdowns. Jeremy Pruitt’s return to Tuscaloosa at defensive coordinator and the hiring of Derrick Ansley at defensive backs coach, sets up a chance to have a very elite secondary.

Smith, a senior, has lined up at safety and Star in practice.

The 6-foot, 195-pound defensive back has played in 41 career games, since enrolling at Alabama in 2013. He’s accounted for 38 tackles, with 15 coming last season in the Tide’s run to a College Football Playoff national title. Smith has also been credited with five pass breakups and a forced fumble. He had two tackles on A-Day for White in its 7-3 win over Crimson.

Brown, a junior, has seen reps at corner and Star in practice.

The former five-star recruit has encountered some off-field issues, but a strong mindset could put him in position for a breakout year. Brown is the same size as Smith (6-foot, 195 pounds), yet he has more physicality and ball skills.

He’s made a name for himself on special teams, collecting nine total tackles in two seasons. LSU running back Derrius Guice got a first-hand glimpse of Brown last year, when he dismantled him on a kickoff return at Bryant-Denny Stadium.

The play brought energy to Alabama’s sideline as it went on to defeat the Tigers, 30-16.

Brown stands at 26 career tackles, with 16 occurring in 2015. He also has three pass breakups and a forced fumble.

The Texas (Beaumont) native chimed in with seven tackles, two tackles for loss, two sacks and a pass breakup last week for team Crimson. If he ever gains the nerve to buy into Saban’s system, Brown could potentially be one of the better defenders in school history.

Averett, a redshirt junior, has made “great improvement” according to Saban.

He is a New Jersey (Woodbury) native, who enrolled in 2013 as a speedy defensive back and a marquee track athlete.

His career at Woodbury High School ended with 198 tackles, 12 pass breakups and 11 interceptions. He’s played in seven games at Alabama, but has very little stats to show for it.

Averett, 6-feet and 180 pounds, took reps at corner and Star during spring practice.

He did a pretty good job defending the likes of Cam Sims and Robert Foster on A-Day, generating three tackles and a pass breakup. Averett has been a practice squad player for a while but with Geno Matias-Smith, Jabriel Washington, Cyrus Jones and Bradley Sylve all gone, he now has a chance to show what he can do.