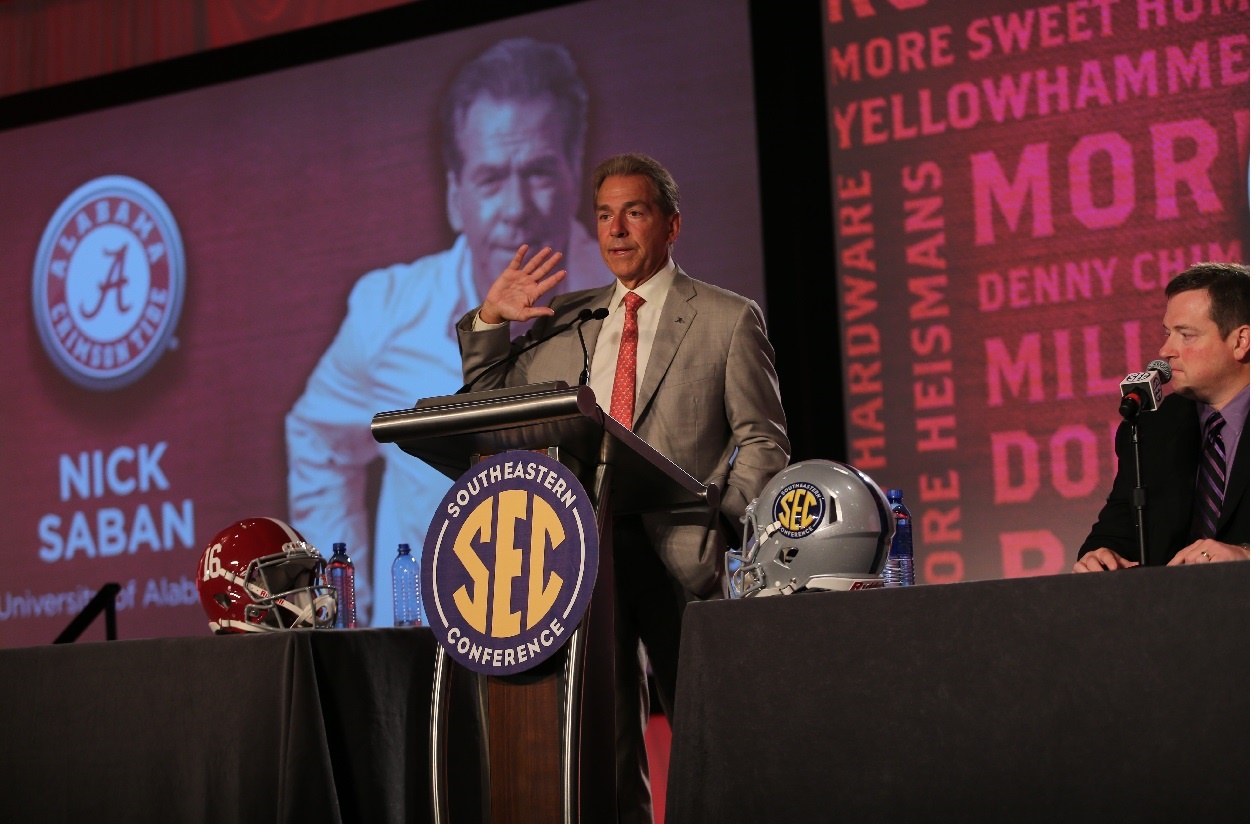 If you think Nick Saban isn’t worried about this team despite the preseason rankings and talent on hand, then you don’t know Nick. See what is worrying this super coach.

What Saban is Worried About in 2016

On the surface, there’s little for Nick Saban to worry about as far as this 2016 team goes. To the fans, sportswriters and other teams that study such things, Alabama is the 600 pound gorilla in the world of college football. They could conceivably field an entire defense made up of 5 star recruits, something no other team in the nation could dream of doing. They have potentially one of the best running back duos, one of the best receiving corps and a huge group of experienced offensive lineman. Add to this that there are four great quarterbacks battling it out for a starting job and you have as solid a team as you could imagine.

So what could Saban possibly worry about?

There are two things on his mind right now, complacency and leadership.

Last season there were few and very minor off field incidents. This was a focused and driven team that was guided by strong and vocal leaders among the players.

In a talk with fans a few years back, Saban vocalized then what he still dwells on today. “You know, players expect coaches to be on them telling how to behave and how to do the right things, but when a fellow player not only walks that walk but is a leader and demands the same of his teammates, that sometimes makes a whole lot bigger impression on other players. You have to have those kinds of leaders on a team to be successful.” Saban told the crowd.

Given the headlines of off field incidents this off season, Saban is wondering if the latest national championship has given his players the feeling that they’ve climbed the mountain and don’t have to fret as much about adhering to Saban’s process. He also wonders if the leaders on this team aren’t being strong enough in their roles to help prevent such things.

This is something that Saban worries about not just this year, but every year.

Last season he thought his team was good, but just going through the motions, not really as focused as they should be until they lost a game Ole Miss. That was the turning point that both refocused the team and got the leadership to step up and really start leading. From that moment on, that was a completely different team to the one that lost that game.

Saban, like the parent of any child or the leader of any team wants to bang his head against the wall and wonder why it takes something like that to bring a team together and get it focused on doing all the big and small things right.

As for complacency, teams too soon forget the history of past mistakes. I remember interviewing AJ McCarron about why, in his opinion the team didn’t repeat as national champions in the 2010 season after winning it all in 2009 anc coming back with all that incredible talent.

His reply was simple. “The same vibe just wasn’t there as it was the year before. You could see guys taking it a little easier and just not doing all the little things that they had done the year before. People weren’t as focused, not as driven and they just weren’t giving it 100% all the time like they did before. Now that I’m the starter, that’s my job and I’m not letting that happen again. We’ve got other guys who saw that happen and they aren’t going let that happen again either.” McCarron said with great expression. Indeed, McCarron was the first and only Alabama quarterback in the Saban era to go back to back as national champions.

That team had great leadership and that is what Saban hopes steps up this season.

This week on SEC TV Booger McFarland, a former college player and now television analyst asked Saban if he was worried about leadership issues arising at Alabama in wake of several recent arrests. McFarland knows that such off feild incidents are sometimes due to a lack a player leadership holding teammates accountable to one another.

Saban’s reply was, “I’m always concerned. One of the things I loved about last year’s team is that we had no issues, no incidences. Players bought in and did the right thing. Every individual was responsible for his actions, what he did and how he contributed to our team. I do think we have some pretty good leadership, but it’s going to have to evolve a little more and people are going to have to buy-in a little more.

“When you have success, some people get complacent and it creates a blatant disregard for doing what’s right. They get casual in their approach to things and aren’t committed to what needs to be. These are all issues you have to overcome.”

In other words, Saban was saying the leadership is there, it just needs to work harder at being better leaders.

If that happens, this can be another Tide that will roll into the third consecutive College Football Playoffs and be a contender. Without it, they could be on the outside looking in.