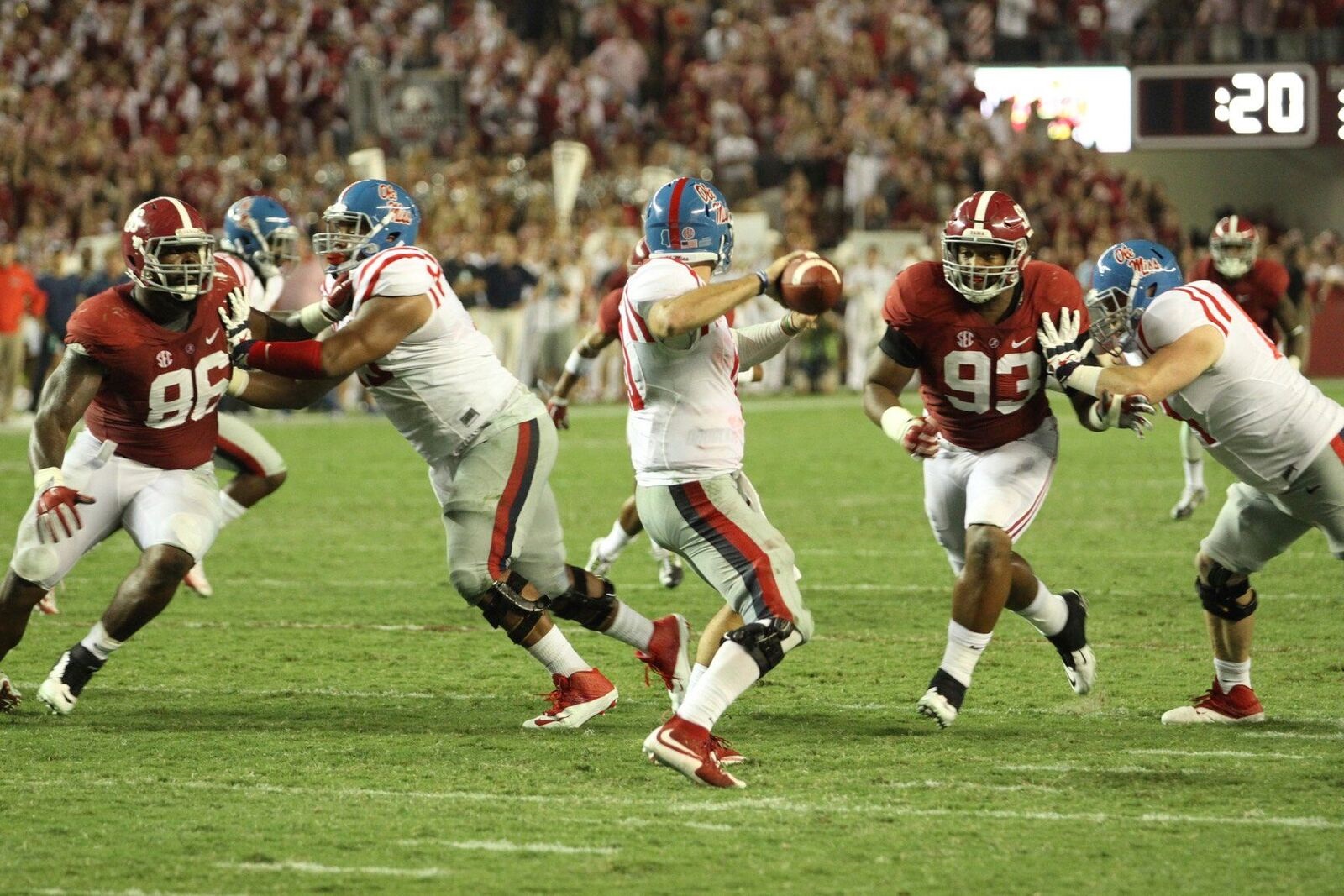 Get the insight into what to watch for in this Saturday’s Alabama / Ole Miss matchup. See what each team is planning and if matches what you’ll see game time.

What to Watch For in the Alabama-Ole Miss Game

Not to pull my own chain, but so far this season, just about everything I said to watch for was dead on in both the first two games. Last week I said to watch for Calvin Ridley to return to the top and he certainly did. And therein lies part of Alabama’s strategy. By re-establishing them Ridley as the star now Ole Miss will be forced to spend time worrying about double covering him.

Number one – Limit turnovers. Alabama lost the last two games to Ole Miss by committing five turnovers in the 2015 game and two in 2014. Alabama would have won both those game if just one of those turnovers had not occurred and they got points out of it. But I doubt seriously that there won’t be some deep shots taken or that you’ll see fear from interceptions from a rookie SEC start.

Still with a first year QB and a stable of first year starting running backs, Saban has to be worried because Ole Miss’ game plan is going to include stripping the ball and creating turnovers. They know that’s how they’ve won these games and they’ve been practicing stripping the ball more than usual in practice.

Watch for turnovers, because Saban is telling his boys that whoever wins the turnover war wins this game, so the Tide will be looking to strip the ball too and keep that opportunistic secondary looking for picks whenever possible. The turnover margin will once again be crucial.

Secondly, do the unexpected. While they’re worried about Ridley deep, hit underneath routes with Dieter in slot and tight end O.J. Howard.

Thirdly, turn Hurts loose. In the past, Alabama has been hurt by mobile quarterbacks and now the Tide has no problem returning the favor. There are designed quarterback draw plays the Tide is just itching to use and also Hurts will be told if nothing’s open and there’s a lane, tuck and go on his own.

Against Fla. State, Ole Miss gave another rookie QB a chance to shine. Seminole Deondre Francois, in his first start at QB ran for 59 yards including a big 31 yard run. This could be Hurts’ coming out party against SEC competition.

Also turn him loose in the passing game. Florida State scorched Ole Miss for 49 points and most of their yardage came through the air. They exposed a huge weakness in that Rebel secondary by passing for 419 yards!

Alabama’s plan of defense – What to watch for when the Rebels have the ball they will try and use that mobile quarterback against Bama as they and others have done in the past, but to counter it, Reuben Foster will be Chad Kelley’s spy for much of the game. Foster’s biggest job of the day will be to keep the QB from sprinting off down the field.

The Rebels rushing game so far this season has been a bit anemic. They rushed for just 174 against Wofford and just 67 against Fla. State. They won’t expect to do much better against Alabama and while they won’t entirely abandon the running game, they won’t make it the key factor in their offensive strategy. Alabama is going to force it to be the Chad Kelley show and they think it’s too much pressure for Kelley to bear. Remember when Alabama made last year’s LSU game be the Leonard Fournette show? They lost the game and Fournette lost any chance of winning the Heisman. Saban knows it can’t be about just one man, no matter how darn good he is.

So look for the Rebels to test the Tide secondary and maybe get the ball to the running backs on screens. They did burn Fla. State with 313 yards in the passing game and 242 yards in the Wofford game, so they do think they can pass on anyone.

So the last thing to look for in this game is trick plays from Ole Miss to try and snatch some momentum or to catch an overaggressive defense in a wrong read. The only thing is, Saban knows this, so it will be fun to see how many there are and how many work.

Oh yes, it may be fun to see how many fits Saban has and if Hugh Freeze, who doesn’t show a lot of emotion, will ever have one.