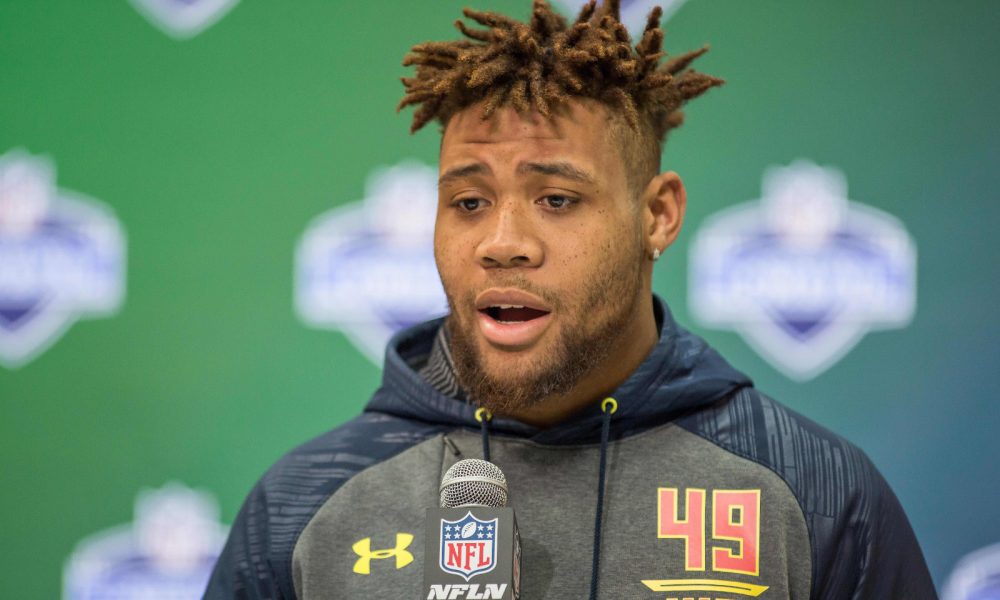 After having four players selected in the first round on Thursday, Alabama head coach Nick Saban and the Crimson Tide had five former standouts taken during the second and third rounds of the NFL Draft on Friday.

Despite multiple analysts having offensive tackle Cam Robinson as a first-round pick and the likes of defensive lineman Dalvin Tomlinson and linebacker Ryan Anderson viewed as third to fourth round values, all three players would hear their names called in the second round.

Edge rusher Tim Williams and wide receiver ArDarius Stewart made up the third round.

With the Crimson Tide’s draft count up to nine this year, yours truly of Touchdown Alabama Magazine now unveils the grades when it comes to the landing spots for all three individuals.

Robinson, who blocked for 28 100-yard rushers in his three-year career, serves as an exceptional road grader and pass protector. He aided former Tide quarterbacks Blake Sims and Jake Coker to 3,000-yard passing seasons, while helping Jalen Hurts capture the Southeastern Conference’s Freshman of the Year and Offensive Player of the Year awards a season ago. Robinson reunites with third-year NFL rusher T.J. Yeldon, of whom he cleared the way for 990 yards and 11 touchdowns during his freshman year and Yeldon’s junior season in 2014.

To pair with being one of three unanimous All-Americans last year, Robinson set the edge for ex-Tide rusher Derrick Henry win the Heisman Trophy in 2015 – 2,219 yards, 28 touchdowns.

Summary: Should Redskins’ defensive coordinator Greg Manusky maximize the talent on this roster, Washington could make some noise in the fall and possibly go deep in the playoffs.

Our nation’s capitol is getting its fair share of crimson, as it drafted both defensive end Jonathan Allen and outside linebacker Ryan Anderson. While the duo oversaw 106 sacks, 56 turnovers and 15 touchdowns in the last two years on defense for the Tide, Anderson totaled 30.5 tackles for loss, 15 sacks and 20 quarterback pressures during this time period. The Daphne, Ala., native led the team in tackles for loss in 2016 (19) and returned an interception for a score versus Washington.

Selecting Anderson gives the Redskins another fierce pass rusher on its defensive front, joining Ryan Kerrigan, Preston Smith, Trent Murphy and Ricky Jean-Francois. Kerrigan led the quartet in sacks with 11 a year ago, despite Washington having the league’s 28th-best total defense.

Summary: Creating negative plays and forcing turnovers delivered the New York Giants to the NFL postseason in 2016. Under head coach Ben McAdoo and defensive coordinator Steve Spagnuolo, the Giants anticipate having another monstrous group along the defensive front.

Listed at 6-foot-3 and 312 pounds, Tomlinson made his living at the University of Alabama on being an exceptional two-gap defender. He displays sound technique with his hands and feet and last season, the Georgia native showed that can even generate pressure from inside (three sacks).

One of the more underrated qualities from Tomlinson is his ability to affect the quarterback without necessarily getting sacks. His 10 1/8″ and 33 ½” arms allow him to knock passes down—10 career breakups — at the line of scrimmage, which disrupts the timing of an offense.

He may not start right away, nevertheless, the Giants got a steal.

Summary: From escaping Hurricane Katrina to now being drafted by the Baltimore Ravens, edge rusher Tim Williams can put his past behind him. He joins cornerback Marlon Humphrey as the second former Tide player that general manager Ozzie Newsome decided to roll the dice on.

Williams’ speed, technique and attitude on the edge is undeniable.

He amassed 19.5 sacks and 28.5 tackles for loss in the last two years, including nine sacks and 16 stops for loss in 2016. His first step upon the snap of the ball frustrated offensive linemen and quarterbacks a season ago, as he assisted the Tide to 16 interceptions, eight fumble recoveries and 11 touchdowns.

While pairing him with C.J. Mosley and Humphrey should keep him level-headed off the field, head coach John Harbaugh expects Williams to terrorize signal callers in the AFC North.

Summary: This pick is as good and the New York Jets’ quarterback play can be next season.

With ArDarius Stewart joining the ranks of Eric Decker, Devin Smith and Jalin Marshall, the Jets have a lethal unit at wide receiver. Stewart provided the pop to Alabama offense as a redshirt junior and senior, collecting 117 receptions for 1,564 receiving yards and 12 touchdowns.

He brings a competitive nature to the table, and does a good job of working back to the quarterback. Consistency in finishing routes will be the biggest question for him moving forward; however, as long as head coach Todd Bowles finds a spot for him – Stewart will be fine.